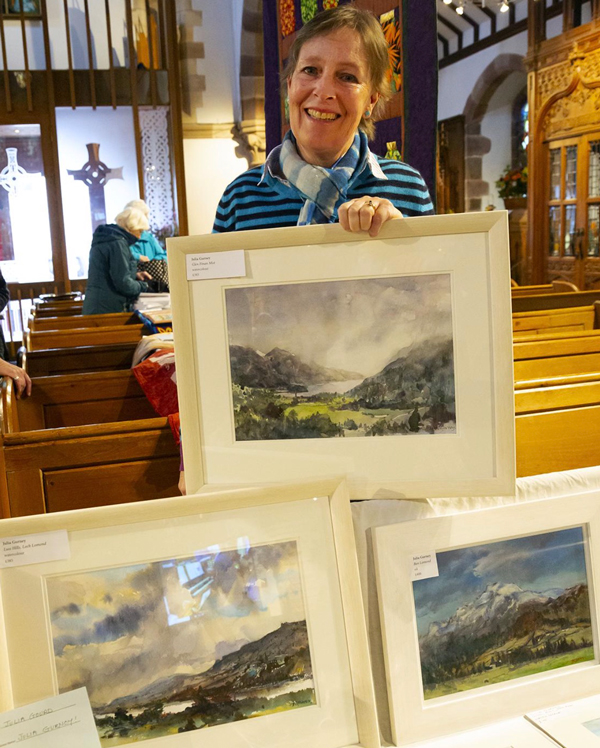 ONE of Helensburgh’s top living artists was born in Northampton — but loves the west coast of Scotland which features in many of her paintings.

Julia Gurney and her husband Peter Gourd and their family moved to Havelock Street in the burgh in 1991, and the scenery and the weather captured her imagination.

Mary-Jane Selwood of the Anderson Trust Local Collection said: “The beauty of the coast motivated her to develop a way of capturing the effect, in watercolour, of the ever-changing light and moods resulting from the varying weather conditions.

“She finds the stimulus of painting a particular place important. First-hand experience, ensuring direct contact with nature, is a discipline which she imposes rigorously on her work.”

The result is that her thought-provoking watercolours of scenes mostly from Loch Lomondside, the Clyde, the Arrochar Alps, Argyll and the Trossachs, cost around £1,000 each. She has exhibited at many London and Scottish galleries.

Julia (right) said: “I am primarily interested in weather conditions and aim to give a sense of the impending weather, such as before rain, threatened snow, after rain, windswept, stillness.

“I try to do this by rendering particular effects of light on the landscape or seascape, cast shadows, changes in focus, clarity to soft, veiled, misty, patches and pockets of light.”

She came from a farming background and lived on a mixed farm in Buckinghamshire near Milton Keynes — which she remembers when it was a small village. Her brothers are still farming there.

“Country pursuits were a large part of our lives,” she said. “I was a nervous rider and didn’t like hunting or competing in hunter trials, unlike my siblings. I did enjoy the freedom riding gave me though to roam about the farm and country lanes.

“My great love was to draw and paint and my grandmother encouraged me. When I was seven I went to board at a prep school and later went on to a girls boarding school in Beaconsfield — and this school introduced me to the arts.

“There was a very good music department. We were expected to take part in the operas and musicals that were produced, and although I wasn’t musical I really enjoyed the concerts we had.

“We went to exhibitions and the theatre regularly and the art teacher introduced me to Jacob van Ruisdael’s moody landscapes and John Piper’s work, all of which struck a chord with me.

“There were no artists in my background, but there was music way back in that my great grandfather played trumpet in the Hallé Orchestra and his wife sang in the chorus. More recently my daughter, Helena, has freelanced as a flautist with them.”

Julia decided she wanted to go to art school despite her father wanting her to do something he considered to be ‘useful’.

She gained BA Hons in Fine Art at Bath Academy of Art in 1976 and the Brighton Polytechnic Specialist Print Making Diploma the following year, and went on to gain an MA in painting at the Royal College of Art in 1980.

While at the college she won its Minor Travel Scholarship in 1979 and the John Minton Award in 1980.

She had to support herself, and she earned money by gardening in Regents Park in London and working in various galleries.

In those days the painting school was in part of the Victoria and Albert Museum and the students used the cafe there at weekends, walking past the Raphael cartoons and rooms stuffed with treasures. They also had access to the library.

The college has a studio in La Cité Internationale des Arts in Paris, and Julia studied there for a term, meeting painters, opera singers, architects and photographers from other European countries who had studios there.

She said: “It was a privileged education and I feel so fortunate to have been able to attend these institutions.”

After leaving art college she started to work in London in Adult Education at Lambeth, Putney and Wandsworth Institutes and Putney School of Art, teaching drawing and painting and life drawing.

Her husband’s job brought the couple and their London-born son Oliver north to Scotland in 1991. 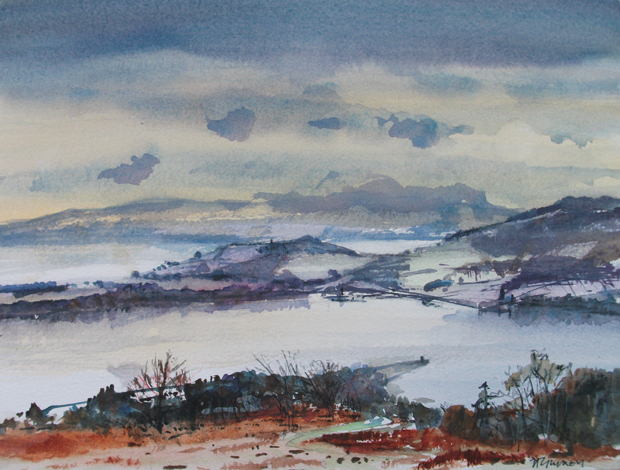 “We had enjoyed a Scottish holiday in 1988, during which we stayed in Helensburgh at a B and B in East Argyle Street,” she said.

“I noted in my diary that Helensburgh would be a lovely place to live — never imagining that we would eventually settle here.”

Oliver and Helena, who was born in Helensburgh, attended Hermitage Primary School and Lomond School, and after they started school she went back to teaching in Adult Education.

Over the years Julia has worked with a range of different media and subjects, including portraits, landscapes and cityscapes.

“When we came to Scotland I started to use watercolour,” she said. “Up until then oils had been my preferred medium, although I did exhibit some water colours at the Bankside Gallery while in London.

“My subject matter had gradually changed on leaving art school.  I had always painted from landscapes in a semi-figurative way, mainly abstracting from structures within the landscape and interiors I lived in, into a sort of interior landscape of the mind, depicting a shallow space.

“I began painting in a more traditional style depicting space in a three-dimensional way.

“This approach seemed more relevant to me as I tried to make a living away from the art school environment. Painting from a specific view in front of the subject became important.

“The effect of the changing weather on what I saw became my subject, and watercolour leant itself to capturing these ephemeral effects perfectly. In the last year I have gone back to using oils, painting in the open air.

“The equipment for this is heavier to cart about than for water colours, but the challenge of painting quickly, on the spot before the light changes too much, is exciting. One has to think quickly and find a shorthand language of marks.

“At the moment the paintings are cruder but have an immediacy about them which I find compelling. I hope that the more I do, the more fluent the marks will become. This spurs me on.”

A member of the Glasgow Society of Women Artists and the Paisley Art Institute, Julia feels that her painting experience has been enriched by membership of Helensburgh Art Club, with the lectures, exhibitions and life classes an important part of her life.

She organises the life class for the burgh club and is a past programme secretary. She has also conducted  art workshops at Geilston Gardens in Cardross.

A member of St Michael’s and All Angels Scottish Episcopal Church, she is the social committee secretary and a member of the rambling club committee.

“My husband, who sings in Helensburgh Oratorio Choir, and I miss the friendships and all the activities that these associations and clubs offer and, like so many others, I can’t wait for life to return to normal,” she added. 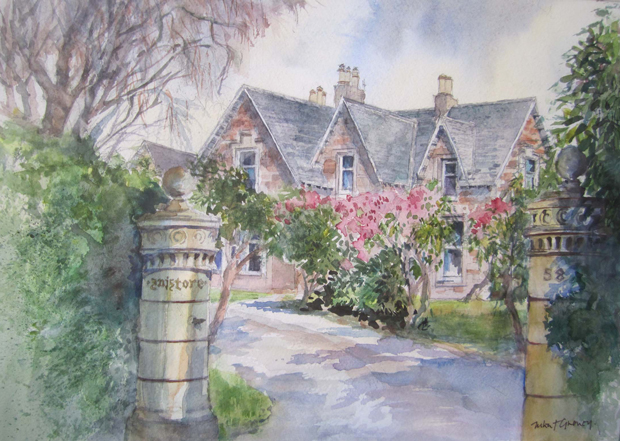 Two examples of Julia's work: Rosneath Peninsula (above left) and Inistore, Helensburgh, which was commissioned by the Anderson Trust (Local Collection).