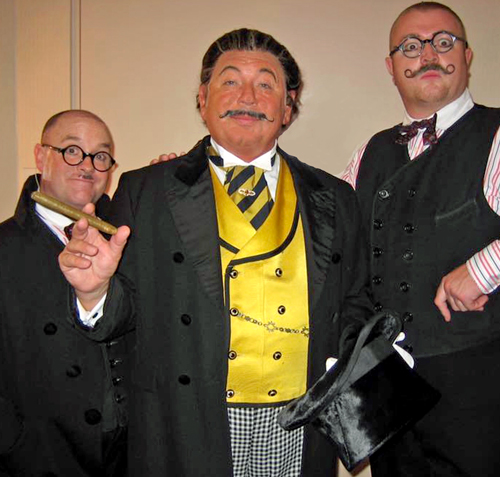 A HELENSBURGH actor and singer had a quiet 2020 because of coronavirus restrictions . . . but that is very unusual in a varied and successful theatrical career.

Bass-baritone Duncan Smith, youngest son of well-known local artist and art teacher Gregor Ian Smith and his wife Kathleen, has appeared in many West End productions, toured at home and abroad, and worked with many famous names. 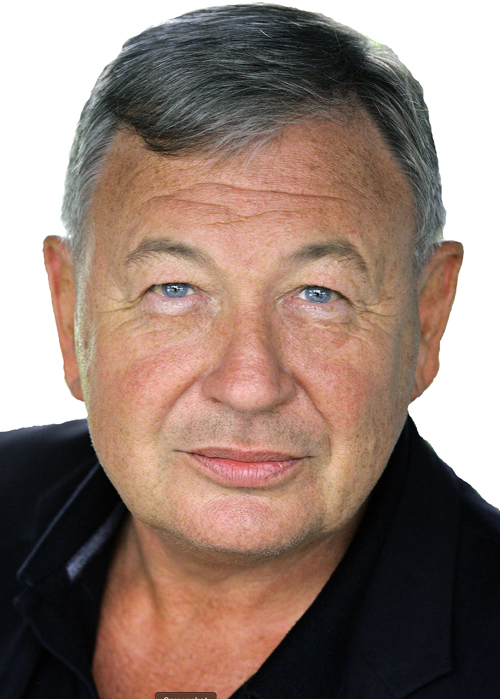 Born on March 3 1955, he grew up with older brothers Graham, Charlie and talented musician Campbell, and sister Kirsteen, in the family home in West Argyle Street and from 1957 at High Glenan, Queen Street.

He was educated at Larchfield School from 1963-68 and Hermitage Academy from 1968-73, and it was at the Academy that his future career was decided.

“I was introduced to music by the inspirational Andrew Kinloch, head of music,” Duncan said. ‘He cast me in two Gilbert and Sullivan operettas, and I was bitten!

“I joined Helensburgh Theatre Arts Club and had six years of wonderful experiences. I also represented Helensburgh in the Clyde Festival organised by Archie McCulloch at a huge concert in Glasgow City Halls, singing the Major General’s song from Pirates of Penzance.”

After leaving school he studied at the Royal Scottish Academy of Music and Drama, now the Royal Conservatoire of Scotland, from 1973-78. His singing teacher was the renowned Marjorie Blakeston — an ex-pupil of his father at Bearsden Academy.

He recalls: “She was a wonderful teacher who introduced me to lieder and opera. I was lucky enough to have principal parts in operas every year.

“I was chuffed to win second prize in the Scots Song Competition judged and presented by Kenneth McKellar, and I won scholarships from the Sir James Caird Trust, the Royal College of Music Trust, and the Scottish International Education Trust.”

The scholarships enabled him to study at the Royal College in London from 1978-81, where his teacher was Professor Lyndon Van Der Pump. He took part in many operas and oratorios, culminating in singing the part of Jesus in the St John Passion conducted by Sir David Wilcox.

His first professional job was at the 1981 Wexford Opera Festival in southern Ireland, singing in two operas and working with the great Italian baritone Sesto Bruscantini.

Next came the World of Gilbert and Sullivan Tour of Iolanthe and The Mikado, and the following summer he worked with his brother Campbell in the Show of the North at the Eden Court Theatre in Inverness.

He said: “I auditioned as soloist with Campbell accompanying me, and we were both hired — much to my irritation as I had to split my fee with him! It was great fun though, singing the Scottish repertoire with Scotland the What?, the star comedians.”

Duncan remembers sitting in a pub with most of the original cast of The Vital Spark, the TV series about life on a puffer which he had enjoyed in his childhood, and basking in the stories told by John Grieve, Wally Carr and Alex McAvoy.

Next that year came Sleeping Beauty at the King’s Theatre in Glasgow, playing the Prince of Arabia in panto with Rikki Fulton as Queen and reunited with Walter Carr as King and Gregor Fisher as Dum Dum, the Buttons character. He still thinks of it as one of his best ever jobs.

“During the run I flew down to London to audition for Opera North,” he said. “At the airport I bought a copy of The Stage paper, our jobs journal, and saw they wanted a baritone for Evita, the blockbuster West End show.

“I did the audition for Opera North, then took a taxi to the Prince Edward Theatre to try my luck. There must have been about sixty guys there and I was called on stage, did my song, had a chat, then rushed back to Heathrow to get back for the evening show in Glasgow.

“Home to Helensburgh after the show, Dad greeted me with ‘you’ve got Evita’ then went to bed, obviously none too impressed. When I got to the King’s the next day, I was given a big round of applause.

“I eventually found out there was only one part on offer and I’d got it. I was extremely lucky, and the change of direction was now ensured! I understudied and then played Peron as Daniel Benzali left to film the Bond film, A View To A Kill.

“The highlight of the year and one of my life was being asked to sing at the memorial service of Sir Michael Redgrave.

“Escorted into the vestry of St. Paul’s, Covent Garden, afterwards, I was handed a glass of wine by Sir John Mills and proceeded to spend an hour and a half in a state of awe chatting to Lord and Lady Olivier, Sir John Gielgud, Dame Peggy Ashcroft, Googie Withers, Sir John and Lady Mills, Lady Redgrave and various young Redgraves. It was extraordinary!

“I shared a house  with Helensburgh friends Biddy Young and Andrew (now Lord) Dunlop, who at that time was policy advisor to Margaret Thatcher. He showed me round no.10.”

Over the next few years he appeared in Chess, Jesus Christ Superstar, Camelot, Phantom of the Opera and The Mikado at various venues, and La Cenerentola at Vienna Festival Theatre.

He also had his first experience of theatre in the round in Trial By Jury at the Orange Tree Theatre in Richmond.

He has fond memories of She Loves Me at Perth Festival Theatre in 1993, working with Fay Lenore, the Scottish singer and dancer who had appeared with Frank Sinatra.

He said: “She was a great character. She married Jay Scott, who was the caber tossing champion and co-owner of Duck Bay Marina and Inchmurrin. He and my brother Campbell used to toss the caber and throw the hammer at various Highland Games.”

Another highlight began in 1994, two years in Copacabana, and he says that Barry Manilow was an absolute delight to work with. The star of the show when it was at London’s Prince of Wales Theatre was Gary Wilmot, who became a great friend and asked Duncan to be best man at his wedding to his bride Sara.

He was the first of the cast to leave when, ten years to the day from his West End debut in Evita, he started rehearsals for a huge two-year national tour of the same production starring his friend Marti Webb, with Duncan as Juan Peron.

In 1998 he appeared in Dr Doolittle at the Apollo Hammersmith with Philip Schofield as the doctor. Julie Andrews was the voice of Polynesia the parrot, and she insisted on rehearsing with the cast.

“I don’t often get starstruck,” he said, “but she is the exception. To have Mary Poppins offering to make you coffee in the Green Room was somehow surreal. She was warm, funny, friendly and one of us.”

The start of the millennium found him appearing in The Secret Garden for the Royal Shakespeare Company at Stratford and then the Aldwych Theatre in the West End. Next came Kiss Me Kate at the Victoria Palace Theatre for a year.

From 2002-03 he was in Anything Goes and Love’s Labours Lost at the National Theatre, one week of one then the other, and both directed by Sir Trevor Nunn. Both shows received rave reviews and were sold out.

In Calamity Jane at the Shaftesbury Theatre he played Henry Miller to Toyah Wilcox’s Calamity in an enjoyable three month run, before the entire cast from the National Theatre recreated Anything Goes at the Theatre Royal, Drury Lane.

“We had another award-winning year, and we were even graced by the Queen and the Duke of Edinburgh on a private visit,” he said.

He twice appeared in Sweeney Todd in tiny venues in Tooting and then Shaftesbury Avenue, playing the evil Judge Turpin in a show set in a 19th century pie shop — in both cases to the great delight of Stephen Sondheim who wrote the score.

A national tour of Sound of Music followed in 2015-16, and then it was back to Sweeney Todd, this time at New York’s Barrow Street Theatre in 2017.

“Sondheim came to see us every week,” Duncan said, “always having a pie before the show as the audience could choose to do. Our pieman was none other than Bill Yosses, President Obama’s pastry chef!

“Malia Obama, the president’s daughter, came to see us and stayed for photos and a chat. She is an absolutely charming, natural young lady and a real credit to her parents.”

That same year he appeared in the feature film Mamma Mia! Here We Go Again, spending four days on stage in the main hall of Oxford University filming the graduation ceremony. He was a professor of chemistry, and other professors included Bjorn Ulvaeus from ABBA and Celia Imrie, who played the Dean.

Duncan’s most recent work was in an international tour of Fame, starring Mica Paris, starting in 2018 and ending at the Troubadour Theatre, Wembley, in January.

“I was the oldest member of the cast, but they were all wonderful to me and it was a real fun tour,” he said.

The pandemic then put an end to performances, including a new production of Local Hero with music by Mark Knopfler at the Old Vic Theatre. He was looking forward to it, but it has been postponed until 2022.

“During the months in self isolation I have redecorated my house in Linslade, near Leighton Buzzard, re-shrubbed the garden, re-upholstered my 1966 MGB, and dubbined everything that’s leather!” he said.

“I don’t think there will be anything in the theatre till the summer. But I am 65 now, and I may have retired!”