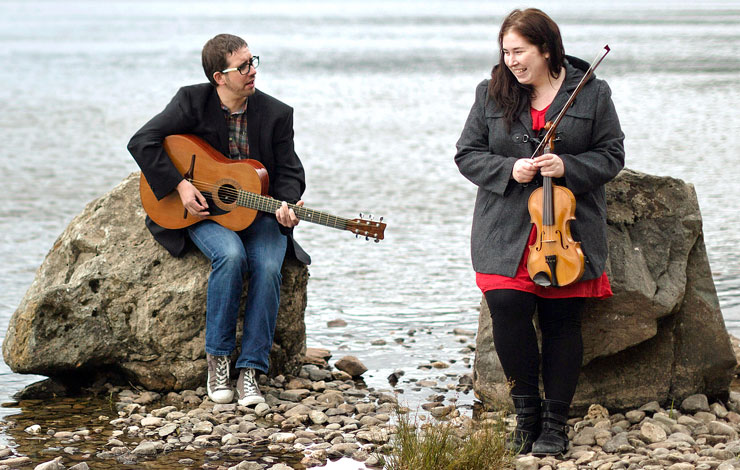 Eilidh Steel, on fiddle, and Mark Neal, on vocals and guitar, play music and song strongly influenced by the music from Argyll and the west coast, as well as their own original compositions.

Their passion for the music and their effortless musicianship clearly shines through in their performances.

“An ongoing project of mine is researching tunes from Helensburgh and the local area, and at some stage in the next few years I hope to compile these into a book.

“I had three commissions for bespoke tunes in a row in just a month, one of which I was asked to play on the Isle of Kerrera off Oban.

“It was written as a present for a couple’s wedding and it was played as the bride arrived up the pier to the ceremony. I really enjoy this type of work and the challenge of writing to the specific needs of a brief.

“I’ve been on eight Hebridean islands teaching and performing. I’m feel I’m very lucky to be able to travel with my work and see such beautiful places both around Scotland and abroad.”

Eilidh and Mark have played concerts and taught at mixed instrument workshops at the Fringe By The Sea festival and at the Atlantic Islands Centre on the Isle of Luing. They have also played concerts at the Edinburgh Fringe.

“We also have plans for more touring abroad, heading back to Switzerland, Germany and Italy," she said.

It all began for Eilidh at the age of four at a Hogmanay party in Rhu when she first heard the sound of a fiddle playing traditional favourites.

She pestered her parents for one — and her dream came true when she was given her own on her sixth birthday.

"I can remember hearing the fiddle and immediately falling in love with the sound,” Eilidh said. “I knew there and then I wanted one of my own.

"The fiddler that night was Helensburgh man Kenny Beaton — I just sat at his feet and listened intently."

She was taught weekly in Cardross by Helen Reid-Foster and quickly showed aptitude at playing what can be a tricky instrument.

“Helen, who later moved to Helensburgh, is a great teacher,” she said. “She teaches many people in the local area and performs in a duo with her daughter Pippa, a clarsach player.”

After Eilidh left Hermitage Academy she was awarded the Sir Jimmy Shand Scholarship to study a BA Honours degree in Scottish Music at what is now the Royal Conservatoire of Scotland in Glasgow.

Since then she has carved out her own formidable full-time career as a professional fiddler and composer. 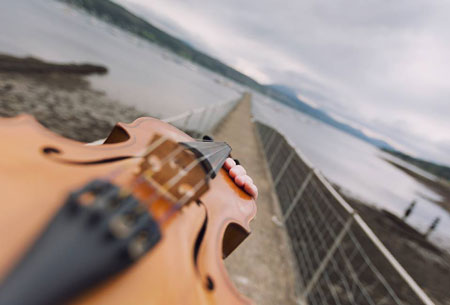 A respected tunesmith, she has been touring abroad since the age of 16, has made many radio and TV appearances, and has been invited to perform at special events including the Celtic Connections festival in Glasgow.

She has accompanied actor and singer Ewan Macgregor in concert, and she was invited to play at the launch of the TED Summit 2019 in Edinburgh International Conference Centre last month. TED is an organisation which aims to spread ideas.

For eight years, as well as performing, Eilidh was the artistic director of the Scots Fiddle Festival, one of Scotland’s biggest traditional music festivals.

As well as programming the festival each year, which involved booking up to 200 musicians, she also founded the organisation's schools project and the highly successful youth outreach project.

Eilidh's involvement with it started when she went along for work experience while at college, and she liked the project so much she decided to get increasingly involved.

A venture which Eilidh started at the beginning of 2019 is 'Tune Tuesday', which is an online tune learning platform on Patreon where people can subscribe to learn a new tune each week.

“I teach the tunes by ear with the camera focussing on my left hand so it can be used as a guide, and the sheet music and information on the background of the tune is also given,” she said.

“The videos can be watched at any time — and any time zone — and there are people learning in the UK but also in New York and Switzerland.”

Originally from East Kilbride and now based in Helensburgh, guitarist and singer-songwriter Mark has been playing various instruments since the age of five.

He moved to Edinburgh to study a degree in physics, then a PhD in Musical Acoustics, before turning to music as a full-time career. Although most of his time is spent performing and writing music he also runs the recording studio The Sonic Lodge in Leith. 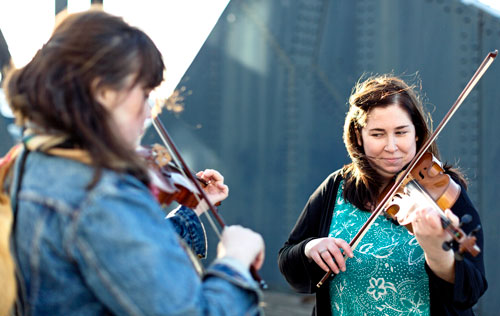 Eilidh and Mark are both experienced tutors, and they are available for workshops and master classes in single instrument or mixed instrument settings.

They enjoy delving into old music collections and drawing inspiration from stories, language, history and landscape of their cultures. The result is beautiful lyrical playing, which intertwines the strings with vocals in elegant arrangements.

“We’ve been collaborating off and on over the past few years,” Eilidh said, “and we are planning some more concerts together soon.”