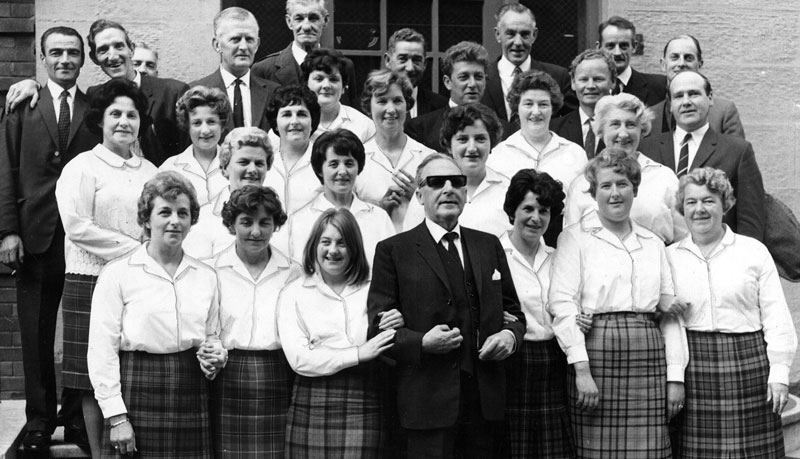 WHEN Helensburgh Dorian Choir held their 70th anniversary concert in May 2019, they paid tribute to the choir’s founder.

But the programme notes about James MacTaggart barely scratched the surface of the story of a remarkable man and musician — known to all as the blind organist.

Researching his life locally proved difficult, but as he retired from Helensburgh to Campbeltown an appeal for information about him was kindly published in the Campbeltown Courier.

There was an immediate response, and much of what follows comes from an article by a personal friend of Mr MacTaggart, David O.McEwan, who was responsible for putting on a celebration of his contribution to music on the centenary of his birth.

This took place in in the Victoria Hall, Campbeltown, on April 26 1997, and featured Campbeltown Brass, Carradale Gaelic Choir, Helensburgh Dorian Choir conducted by Alan Craig, Lorne and Lowlands Church Choir, and several individual performers, and raised £740 for the Royal National Institute for the Blind.

“He was one of the first to befriend me when I came to Campbeltown as a young teacher in 1973,” David said. 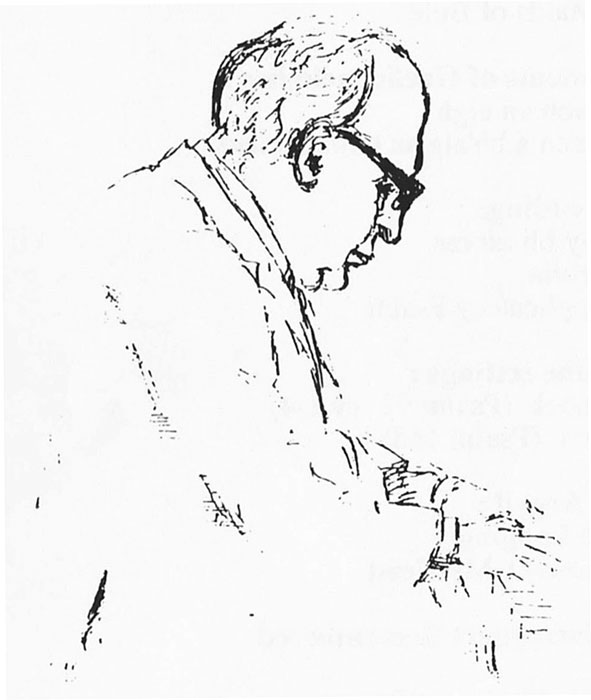 James MacTaggart was born on July 12 1897 on the Island of Coll. His father, Robert Mactaggart, was the schoolmaster there, and his mother, Margaret Muir, was a native of Southend in Kintyre.

Her father had been a captain on some of the Clyde steamers which plied between Campbeltown and Greenock.

The tragic event which was to shape his life came when James was just eight, when, along with some friends he was watching the building of the new church at Arinagour on the island.

As is so often the case with young boys, the stonemasons at work provided an opportunity for some childish pranks.

One of the masons produced flying grit from the friction of his chisel against the stone, and alas this grit entered the eye of young James.

What at first looked like a scratch on the surface of the eye turned out to be permanent damage.

Treatment was delayed by the isolated nature of the island, and James complained of pain for some two months. He was eventually taken to hospital in Glasgow, and there he had the misfortune to contract scarlet fever and then diptheria.

He spent nine months in isolation, and while in hospital he contracted an infection in his good eye. Such was the extent of this infection that the eye had to be removed.

As if such misfortune were not enough, James then learned that his father had suffered a stroke and died.

His mother was forced to leave Coll and earn a living for the family — James, three sisters and one brother — in Glasgow where she took in boarders and put her skill as a seamstress to good use.

James was sent to the Blind Asylum in Glasgow. From there he won a scholarship to the Royal Normal College and Academy for the Blind in Norwood in south London.

The College prepared him for a career in music. He was taught life skills, and he passed the degree of Associateship of the Royal College of Organists at the age of just eighteen.

James returned to Glasgow where he became the organist at Camphill Church, Queen’s Park.

As a result of health problems he had at that time, doctors advised him to seek recuperation in the country.

So he moved to Kintyre where he stayed in Southend, the home of his mother, and where his father had been schoolmaster earlier in his career.

From Southend James moved to Campbeltown where his abilities as an organist were put to good use in the Lowland Church in Longrow. There he met and married Marion McLarty who sang in the choir.

By 1928 James and Marion had left Campbeltown to live in Helensburgh at Sandringham Place, 80 East Clyde Street, and he established himself as a private piano teacher, singing teacher and organist at St Columba Church in Sinclair Street where he gave thirteen years valuable service.

During World War Two he taught in John Street Secondary School in the centre of Glasgow, while his work as an organist took him further afield and for some time he held a position at Orchardhill Parish Church in Giffnock.

He was appointed a lecturer in music at Langside College, a job which gave him much satisfaction.

The long journey by bus from his second Helensburgh home, Burnbank Terrace, 29 John Street, to the south side of Glasgow held few terrors for him and many stories remain of his ability to negotiate changes of bus and train in the centre of Glasgow.

For some time too he was organist and choirmaster at Claremont Church in the west end of the city.

Latterly he was organist and choirmaster at the now demolished St Bride’s Church in Helensburgh, and held the post of music organiser for the County of Dunbarton.

This local authority position, funded through the Carnegie Trust, involved him in training and encouraging others to form children’s choirs.

This work took place in Helensburgh, Dumbarton and the Vale of Leven, and local choral festivals were held on Friday evenings in the Masonic Temple at Alexandria.

He was the first conductor of Cambeltown Gaelic Choir. founded in 1927 by a group of Gaels, among them the late Sheriff Macmaster Campbell, a founder of An Comunn Gaidhealach.

His early training paved the way for the choir’s first victory in 1930 in the Tullibardine Shield Competition at the Royal National Mod under Miss Jen Brown who led the choir to victory twice. James also served as a Mod adjudicator from 1948.

When Carradale Gaelic Choir were in need of a conductor, James travelled by steamer from Greenock each weekend for the practice sessions.

So began his long association with the Gaelic culture, one which was to bear fruit in a variety of arrangements of well-known melodies.

When he retired in 1957 James returned to Campbeltown where he found himself once again at the console of the Longrow church organ leading the worship and choir with distinction.

The death in 1961 of M.G.McCallum, the music master at Campbeltown Grammar School, led to his having a short period of class teaching.

David McEwan says: “Those who were taught by him then remember the impact he made on the school with his unfailing sense of musicianship.

“A popular teacher, he always had a ready number of volunteers to walk him home even although he never required their services.”

In 1964 he made his previous journeys in reverse to set up Helensburgh Dorian Choir, initially as a night school class in singing, and it still prospers today with concerts twice a year in the United Reformed Church in West Princes Street.

The 1970s saw James beginning to relinquish some of his musical commitments but retaining to the last a vital interest in all that was happening in the musical life of the Campbeltown area.

Even in these latter years he contemplated a collaboration in song and words with famous local writer Angus McVicar. This was not to be, however.

Two honorary positions, president of the Music Club and of the Kintyre Music Festival, gave him much pleasure.

The death in 1979 of Marion, his wife and his “eyes”, was a cruel blow. She and others in the family had painstakingly copied out his compositions from dictation.

James survived her by several years, and he was a regular contributor of recordings of his singing to his own piano accompaniment to ‘Playback’, the talking magazine on cassette for the blind in Strathclyde which still flourishes today.

A brief period of ill health found him taking refuge in the home of his daughter Mary in Ripon, North Yorkshire, and he died in Harrogate on February 1 1985.

In the programme for the centenary celebration David wrote: “His was a remarkable life; one which was a triumph over adversity. His struggle to persevere and succeed became the hallmark of his chosen career.

“The stories of his independence of mind and dogged determination are legendary. His thoughtfulness and kindness to others are remembered fondly.”

Mairi Cosgrove grew up in Campbeltown where her father, the Rev James Hood, was minister of Lorne Street Church from 1961-87 where James occasionally played the pipe organ.

She said: “I was privileged to receive some organ lessons from him when I was in my early teens. He also was a regular guest at the manse. He was immensely gifted and spectacularly humble.

“He knew Jesus Christ as Lord and Saviour. I recall from the 70s when a young and trendy Summer Mission team were working in Lorne Street, the rather charismatic and unconventional, for the time, leader said to the congregation, ‘Hands up if you are a child of God‘.

“The congregation uncomfortably studied their shoes. However one hand was raised high — that of James MacTaggart! Obviously he did not know, nor likely care, that he was the sole respondent.”

Campbeltown resident Eva Graham phoned me to pay tribute to the man who had been her next-door neighbour for several years when she was at school.

“Mr MacTaggart was very nice and very clever,” she said. “I was at primary school and he gave lessons there. He played the piano and he sang, and he knew everyone’s voices immediately.

“On one occasion I got sent out of his class for talking and I was embarrassed when the head teacher saw me. But he did not tell my parents.

“At home we could hear him playing the piano a lot. He was very fond of his dog, called Laddie, and would go for walks with it — although it was not a guide dog — as he knew the area well and used his white stick expertly.”

Helensburgh woman Mrs Elizabeth Breheny got in touch to say: “My father, Bob Clark, joined St Bride’s Church in the 1950s because James MacTaggart the organist and singing teacher was there.

“Dad was the gardener at the Victoria Infirmary, and we lived in the lodge there. He and Alastair McDougall were founder members of the Dorian Choir with James MacTaggart.

“A huge admirer of Mr MacTaggart, Dad went on to entertain local people with concert parties.”

Reporting on the centenary concert, the Courier stated: “The most noteworthy item on the programme was Campbeltown Brass’s performance of ‘Death of Fingal the Brave’.

“This was an overture composed by MacTaggart, and it is considered his major work.

“Several members of the family attended, and his daughter Mary spoke movingly of how much her father would have enjoyed the evening.

“Performances were given which reflected his wide interests and talents as organist and choirmaster, piano and singing teacher, composer and arranger, and poet.”