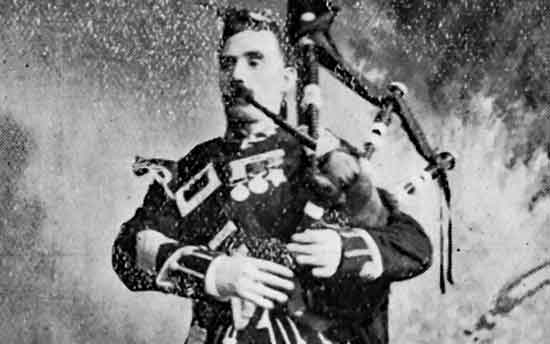 TWO of Scotland’s leading pipers of their respective generations lived in Rhu and worked on the Clyde Training Ship Empress in the Gareloch.

Murdo MacDonald and Archie McNeill shared their love of the bagpipes, but otherwise lived very different lives — Murdo as a soldier, Archie, who was blind, as a teacher and composer of pipe music. 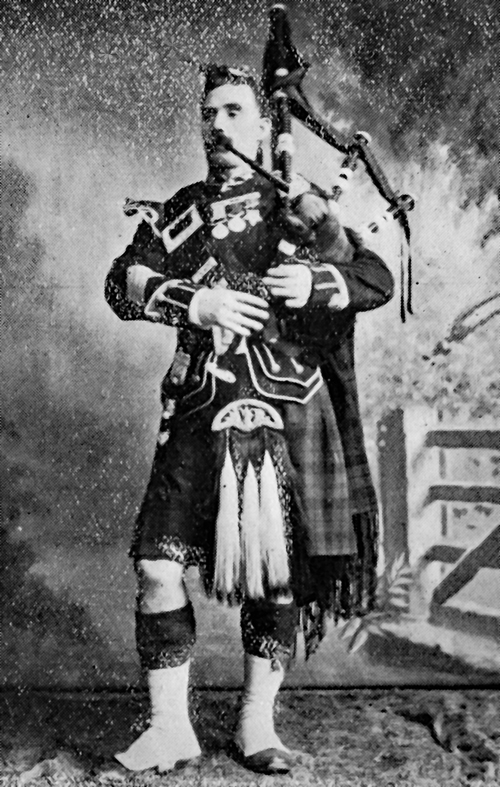 A farmer’s son born in Muir of Ord, Ross-shire, in 1862, Pipe Major Murdo MacDonald was considered one of Scotland’s finest and most distinguished soldiers and a piper of national fame.

He died at his village home, Osborne Villa in School Road, on February 9 2016, and many tributes followed.

Early in his life he joined the Army, and served some 27 years with the colours.

In 1884 he went out to the Sudan with the 2nd Battalion of the Scots Guards, where he was in combat for two years and incurred slight wounds.

When that campaign ended, his battalion had a march of 32 miles to their point of embarkation, and along the entire route he played his bagpipes — a feat which was a proud memory in the Guards for many years.

At the outbreak of the South African War he was transferred to the 3rd Battalion of the Royal Scots, and with them fought the Boers for about three years.

He earned a great number of decorations, which included the long service and good conduct medal, Egyptian medal, Khedive’s star and clasps, and South African medals King’s and Queen’s and five clasps.

The Helensburgh and Gareloch Times obituary stated: “His was a stalwart figure, beautifully proportioned.

“He swung his kilts in the proud way that the real highlander does, and adorned with his numerous decorations was a never-to-be-forgotten picture of soldierly pride and high, quiet courage.”

Dr W.Semple Young, one of the surgeons in charge at the British Red Cross auxiliary hospital in Hermitage Park, once told him: “Heaven send us a few thousand Highlanders like you, MacDonald.”

For years he was greatly sought after as a model by many of London’s greatest artists.

He was as well-known in the Metropolis as on Garelochside, and in London’s Scottish circles he was a big favourite.

He taught some of the royal Princes dancing, and was the piper who played for HRH The Prince of Wales, afterwards King Edward, when he danced at the Cadets College.

Murdo was also a crack shot, and held many trophies which confirmed his prowess as a marksman.

At the outbreak of World War One he offered his services to King and country, was accepted, and after a time at Swindon and elsewhere was soon in the firing line.

But he caught Bright’s Disease, which affects the kidneys, in the trenches because of exposure, and was invalided back to Britain in August 2015.

After a time in hospital he arrived back in Rhu on leave, but had a relapse from which he failed to rally, and passed away, his wife Annie Murphy at his bedside.

He was considered a great piper, and any band he was in charge of was always second to none. In the South of England while he was training, English and Belgian Generals complimented him on his excellent music.

As Pipe Major on the Empress for nine years, he was looked up to by the boys and made a major contribution to their musical lives and the several bands on the ship.

The obituary concluded: “At home and abroad, in his battalion and in the firing line, Pipe Major MacDonald was a first favourite, whose death will be lamented on all hands as the passing of a brave soldier and generous friend.

“To his widow and her two fatherless girls, as well as to his two sons, who are doing work for their country, the very deepest sympathy is extended.”

At the time of his death, one son, John Joseph, was serving on a transport ship in Russia, and the other son, Murdo, who was a Pipe Corporal, was in hospital in Yorkshire.

His brother Alexander was a Chief of Police in Wales, while another brother was piper to the Mackintosh of Mackintosh at Moy in the Highlands, close to Tomatin.

The funeral took place from Osborne Villa to Helensburgh Cemetery in very bad weather. But despite that, many people turned out to watch the procession as it wended its way to the burial ground.

The cortege was headed by the Highland Light infantry Pipe Band from Portkil, and there was a firing party from the same regiment. Six sergeants were pall-bearers, and Captain McAuslan was in charge.

There was sadness on board the Empress that the stormy weather prevented the pipe band and other boys attending the funeral.

Beautiful wreaths were sent by mourners from all over the country, including one from the sergeants of the Royal Scots.

The Rev Hugh Miller MA of Shandon Church officiated at the house and held a short but impressive service at the grave.

The customary volleys were fired; Pipe Major Day of the Royal Scots played the mournful ‘Lochaber No More’; the buglers sounded the Last Post, and the Pipe Major was laid to rest. 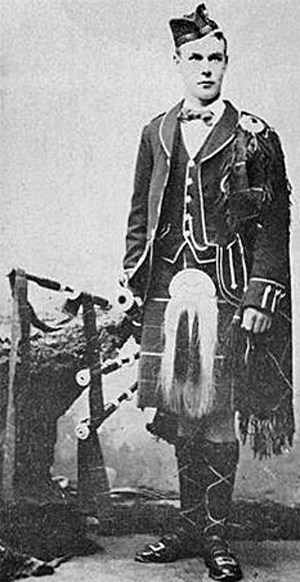 The family moved to Rhu when Archie was only a few months old, and when he was ten Archie had an accident while playing a game with friends which led to him becoming progressively more blind from the age of 18.

He lived in the village until he was 27, when he moved to Glasgow and obtained a post in a brush making factory where he worked for many years alongside many other blind people.

His first piping instructor from when he was 16 was Roderick Fraser, the piper at Ardencaple Castle.

In due course Archie became a piping teacher, and some of his pupils went on to become among the best-known pipers in the country.

A prolific and highly regarded composer, he is thought of as the ‘grandfather’ of the College of Piping in Glasgow, where many of his methods are used to this day. He was also a regular at Scottish Piping Association meetings on Saturdays in Glasgow.

One of his pupils recalled later: “I had lessons from Archie in the early 1950’s at a College of Piping Summer School on the island of Tiree.

“Lessons from Archie were unusual to say the least — he was like the Guru from the ‘Kung Fu’ programmes. His eyes were very white and eery looking, but there was nothing wrong with his ears.

“He would pull you up on the slightest error and he would explain exactly where you went wrong, and the best way to correct the fault.”

After World War Two he worked at the Henderson Bagpipes Workshop where he tested the quality of drones and chanters.

He also wrote for the Piping Times, and it was said that he could remember the sounds of various pre-World War One bands and pipers as if he had heard them recently.

In his later years he continued to teach and to play, and he made several trips to Canada to visit his son Alex, who was one of the leading pipers of the day.

Dale D.Brown, from Michigan in the United States, recalled: “I first met Archie in Montreal when he judged the piping competition there in 1957.

“I was only 16 years-old and had heard much about Archie as my teacher Walter Rose had been a student of Archie in Scotland.

“The following year I went to the College of Piping Summer School which was held that year at Tobermory on Mull. Because of my association with Walter Rose I took lessons with Archie in the small room that he had at the school.

“While I was there I would take Archie on walks. Talk about an odd couple — a 78 year-old blind man and a tall skinny American kid.

“There are many things that I wished I had asked him now. Being a little mischievous I wanted to know if there were any piobaireachds that Archie didn’t know.

“Each day I would ask him about the most obscure piobaireachds I could find in the Piobaireachd Society books. He knew them all.”

Archie, who married twice — to Agnes Russell and Janet Findlay — and twice became a widower, had a great interest in and studied ancient civilisation.

He spent his final years in Glasgow, and he died at the age of 83 in the Royal Infirmary on October 23 1962.