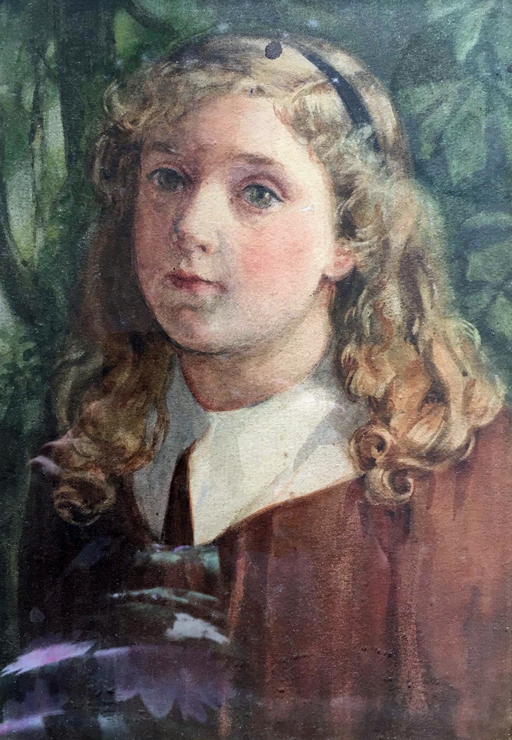 Vea was the grand-daughter of Dr Charles Blatherwick, a notable watercolourist from Rhu, who was the subject of an Eye on Millig page a few weeks ago.

Hartrick was the son of Dr Blatherwick’s second wife, Josephine, and grew up with his daughter Lily, also an artist. He was his stepson and her stepbrother, and in 1896 stepson and stepdaughter married.

The Anderson Trust secretary, Mrs Mary-Jane Selwood, says: “I am anxious to have the artist confirmed, together with the identity of the sitter, who may have been Vea’s sister Josephine.”

“I have included the portrait, with a plea for help, in a display of other family portraits in one of the display cases upstairs in Helensburgh Library in West King Street.

“Vea and Josephine were sisters who were unmarried, so we must assume that their father was a Black who had married one of A.S.Hartrick’s sisters.”

Hartrick regarded himself as a Scot, the Rose Bradwardine of Sir Walter Scott’s ‘Waverley’ having been modelled on his mother’s ancestor, Mary Stewart of Invernahyle, Appin.

The family moved to Scotland when he was two years-old. His father died on active service at the age of 38 shortly afterwards and in due course his mother married Charles Blatherwick.

Archibald went to school at Fettes College in Edinburgh and then to the School of Medicine at Edinburgh University.

He wanted to be an artist rather than a physician, so he attended the Slade School of Art in London, then moved to Paris with a group of Slade and Royal Academy students, attending first the Attelier Julian, and then the Attelier Cormon.

By the time he exhibited his first painting at the Paris Salon, he had already become friends with Paul Gauguin, whom he met while painting in the summer at Pont-Aven, Britanny, in 1886, and with Vincent Van Gogh and Henri Toulouse-Lautrec, whom he met in Paris.

He greatly admired the way in which Toulouse-Lautrec applied his considerable scientific knowledge of colour to lithography production — and in due course he became a founding member of London’s Senefelder Club, named after the artist who had invented lithography in 1771.

He came home to Rhu in 1887 and was a friend of the group of young, Paris-trained painters known as the Glasgow Boys, but found earning a living difficult.

Two years later he moved to London, where the need for graphic artists for the new black-and-white illustrated magazines was great. There he met the American lithographer Joseph Pennell and the painter James McNeil Whistler.

Although his later lithographs do not reveal their influence, as a young artist earning his living with various illustrated weeklies he much admired the work of Charles Keene, a Punch magazine staffer, and other Sixties black-and-white artists, in particular Fred Walker and George Du Maurier.

On assignment for The Daily Graphic, which had hired him on the strength of a few illustrations which had appeared in Good Words, he was cruising in the Mediterranean when he met novelist Thomas Mann.

At the end of the 1890s Hartrick and his wife and stepsister Lily Blatherwick settled in the small Cotswold village of Tresham in Gloucestershire. For ten years she painted, primarily flowers, while he made a living freelancing for various London periodicals.

The Boer War had just begun, and he found himself transforming battle sketches into finished lithographs for the editor of a newly established illustrated magazine, The Sphere.

From the well-stocked library at nearby Alderly House he borrowed books on military history, but at the same time as that he was painting what became a celebrated series of country types.

He illustrated Thomas Hardy’s tales of fashionable country-life and self-sacrifice in an urban slum, “A Changed Man”, published in newspapers and magazines and later as a book in 1913.

From 1895-1907, at which point he and his wife moved back to London from Tresham, he exhibited his landscapes and character studies at the Royal Academy, achieving the distinction of being elected an Associate of the Royal Society of Painters in Watercolours in March 1908, becoming a full member in 1920.

In all he had over 200 works shown at the Royal Watercolour Society and he also exhibited works at the Venice Biennale on three occasions.

He became drawing-master at the London County Council School of Arts and Crafts at Camberwell, but he could afford only a modest house in the suburbs, near Parson’s Green in Fulham. 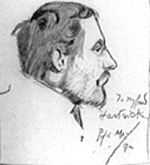 By the outbreak of World War One Hartrick (left) was teaching both day and evening classes at the Central School of Arts and Crafts in Southampton Row.

During Zeppelin airship raids, he and his students sheltered in the London Underground.

During the war he contributed works to the British War Memorials Committee collection of artworks.

Immediately after the war he was commissioned by the London Underground to complete a portfolio of lithographs on ‘War Work’, very like the six entitled ‘Women’s Work’ that he executed for the British government in 1917.

Author of a highly anecdotal autobiography of his half-century in art published in 1936, ‘A Painter’s Pilgrimage through Fifty Years’, at the outbreak of the Second World War he was among the first to offer his services to the War Artists’ Advisory Committee.

In 1940 he was the first artist commissioned to record the work of the Women’s Land Army, the same subject he had covered in World War One.

Prints of his work were sold at the National Gallery during the war and featured in the Britain at War exhibition which opened at the Museum of Modern Art in New York in May 1941.

During the war, he also painted scenes near his former home at Tresham for the Recording Britain Scheme.

He died in his 87th year in London on February 1 1950, and the following year the Arts Council organised a memorial exhibition.