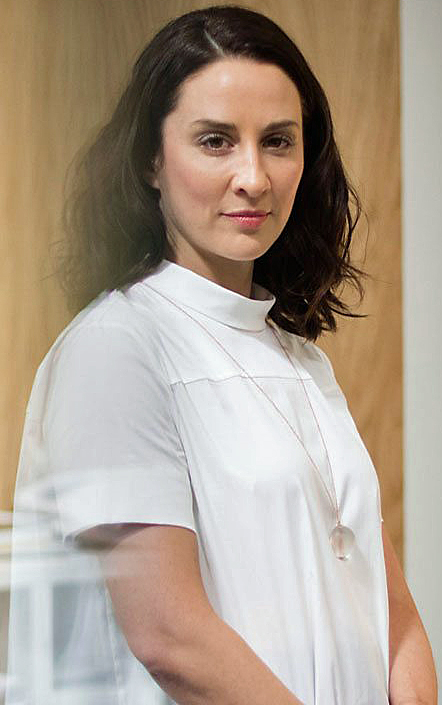 THE TALK of the TV drama steamie in the spring of 2017 was a very talented Helensburgh-born actress.

Morven Christie, who says that she is beginning to wonder if she is becoming the go-to-actor for gutsy parts in top level drama series, was outstanding in the three-part BBC drama ‘The Replacement’.

She played a stylish and successful architect who took maternity leave from a Glasgow practice where she had just been offered promotion — with lots of very recognisable city and west end scenes — but her life was turned upside down by her replacement, played by Vicki McClure.

Morven could not believe her luck when she got the call for the role.

“I thought it’d be a scene in an indie film because that’s all I’d get offered without an audition,” she said.

This followed another tour-de-force in ‘The A Word’, set in the Lake District and dealing with the problems for a family of having a five year-old son with autism.

Morven, who is 35, was born while her parents were living in Helensburgh, but only lived locally for a few months until her family moved to Glasgow.

She grew up in the city, left school just before she turned 16, and spent a few years working at whichever jobs came up.

“I was a ski instructor for a bit at Glasgow Ski Centre and Aviemore, worked in shops, waitressed,” she says.

It took her a while to realise that acting was what she wanted to do. Eventually she began a TV production and journalism degree, and while making a short film for that, the penny dropped — she was on the wrong side of the camera.

She switched to an acting course, then moved to London to study at the Central St Martin’s Drama Centre.

After leaving drama school in 2004, Morven, who is 5ft 3 ins tall with light brown hair and hazel eyes, was soon in demand on stage and screen, playing Jane Bennett in ITV1’s critically-acclaimed ‘Lost in Austen’ and Rose in ‘Oliver Twist’ for the BBC.

Among her stage work were the leading roles of Juliet in ‘Romeo and Juliet’ and Hero in ‘Much Ado About Nothing’ for the Royal Shakespeare Company in 2006-7, in which she received rave reviews for both her portrayals.

Early in 2009 she starred at London’s Old Vic Theatre in the final leg of the Bridge Project, a ten-month tour of Tom Stoppard’s new adaptation of ‘The Cherry Orchard’ and ‘A Winter’s Tale’, directed by Oscar-winner Sam Mendes.

She said: “The things you learn on a project like this are on a completely different level to other experiences. But theatre can be quite hard work and very pressurised.”

Her film debut was in ‘House of 9’ with Dennis Hopper and Susie Amy, the story of nine strangers, with no apparent connection between them, being abducted, drugged, kidnapped and sealed in a house together.

She also appeared in ‘The Flying Scotsman’ with Johnny Lee Miller, which told the story of inspirational Ayrshire cyclist Graham Obree who broke the world one-hour record in 1993 on a bike he designed.

She played the supporting lead role of Watson in the film ‘The Young Victoria’, which told of the turbulent early years in the life of Queen Victoria and starred Emily Blunt.

In October 2009 Morven was in South Africa filming in Alan Bleasdale’s ‘The Sinking of the Laconia’, a highly-rated two-part drama shown on BBC2.

The commander of the German submarine then undertook a daring rescue after he realised the ocean liner had been carrying a large number of civilians and Italian prisoners of war.

But the mission — against the orders of Nazi high command — took a tragic turn when the U-boat was attacked by a US bomber.

The following year she opened in the National Theatre production of Ena Lamont Stewart’s ‘Men Should Weep’, a moving and funny portrayal of impoverished 1930s Glasgow, a raw salute to the human spirit, at the Lyttelton Theatre on London’s South Bank.

It starred among others top Scottish comic actress Karen Dunlop.

Morven can be heard regularly on radio, and in 2011 she was highly praised for her work in the Radio Four afternoon play ‘Whenever I Get Blown Up I Think of You’, broadcast to mark the sixth anniversary of the London bombings.

Guardian critic Elisabeth Mahoney wrote: “Molly Naylor’s play, based on her experience of surviving the Aldgate bomb, was just the thing with which to greet the anniversary: a brave, funny, tough and beautiful piece of writing.

“What she articulates so well — and Morven Christie, as Molly, captured in her performance — is the intensity of moving to a big city for the first time, and the hugeness of every day.

“The bombing, though it changes her life, is simply one part of that, told in the same poetic, observational style with which she recounts more ordinary aspects of city life.

“Her description of the bombing is powerful but full of personality as she recalls trying to break out of the tube carriage and failing. ‘We’re like rubbish superheroes,’ she notes.”

In 2011 she starred in the well-known short film ‘Hollow’, winner of four awards at the Rhodes Island International Film Festival.

It explored the nature of addiction as Morven’s character struggles with her partner to overcome heroin addiction.

The next year she was in the cast of the second and third series of the BBC Two weekly comedy series set against the backdrop of the Olympic Games, ‘Twenty Twelve’, playing the head of legacy at the Games organisers in the spoof documentary.

Morven said: “I’m not a fan of comedy in general, but I love this kind of stuff. It’s more believable than a lot of sitcom stuff.

“We have got used to slightly disingenuous TV, like Friends, which was great for its time but people get bored of that kind of thing after 10 years.

“But in our show, situations were painfully real.”

Films since have included ‘Hunted’, a big budget spy thriller, and an independent Scottish film, ‘Shell’, written and directed by Scott Graham, about a family who run a small petrol station in the Highlands.

In 2015 the National Theatre of Scotland announced that Morven would play the central role of Lise in their production of ‘The Driver’s Seat’, adapted and directed by Laurie Sansom from the novel by Muriel Spark, at the Lyceum in Edinburgh and the Tramway in Glasgow.

‘The A Word’ followed last year, and she also recently appeared in the ITV retro-detective drama ‘Grantchester’ and in Birger Larsen’s award-winning ‘Murder’ on BBC Two.

Currently she is shooting a second series of ‘The A Word’ until early summer, and then she will be free for the first time in two years.

But she will not be resting at her Glasgow home — she is planning finally to direct a short film she has written, behind the camera as she once was.