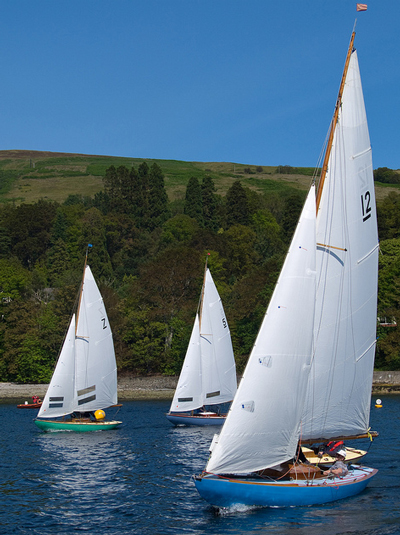 The Gareloch Yacht Club was founded after the First World War to encourage yachting in and around the Loch. Originally this was on a handicap basis.

In the summer of 1923 it was decided that ‘One Design’ racing would be more satisfactory, and they approached McGruers of Clynder to design a yacht suitable for racing on the Gareloch.

Ten were ordered and they cost just under £160 complete, including sails.

While they were under construction, three members of the Royal Forth Yacht Club visited McGruers and were so taken with what they saw that they promptly ordered five further boats to be based at Granton on the Forth.

The main difference was that they had teak flooring in the cockpit, instead of the white pine in the Gareloch boats.

The local Garelochs were delivered in the spring of 1924 and the Forth boats that June, only six weeks after they had been ordered.

A 16th boat, Juno, was built in 1928 by the McGruers for their own family use and is still owned by them to this day.

By 1935 the Dragon class, a more modern design, had become popular on the Clyde and began to replace the Garelochs.

This year also saw the absorption of the Gareloch Yacht Club by the Royal Northern Yacht Club which had moved to Rhu from the original  base in Rothesay.

The last Gareloch Commodore’s burgee hangs in the entrance hall of what is now the Royal Northern and Clyde Yacht  Club at Rhu.

The class increasingly lost favour in the area and boats were dispersed at first to the Forth, and then to the Aldeburgh Yacht Club in Suffolk.

When the Second World War came, only one remained in the Gareloch, six were on the Forth, seven at Aldeburgh, one on the Solway, and one on Loch Lomond.

By 1955 the boats had become even more dispersed, but John Henderson, who had grown up sailing Garelochs — and whose father had not only been both the first and the last Commodore of the Gareloch Yacht Club, but also one of the original owners — started work on his dream of bringing all the Goddesses back to the Gareloch.

By 1956 he had managed to get ten back to the Gareloch, five of them from Alderbergh leaving only one, Iris, still there, one from the Forth and another from Conway.As each one returned it was brought back to a standard specification to ensure real One Design racing  again.

He then managed to get three more from the Forth, and Pandora from Bucklers Hard on the Beaulieu River in the New Forest in Hampshire. By the end of the year only Teal and Iris were still missing.

The following year saw both of these back home, and August 17 1957 was particularly memorable as that was the day that Iris returned from Alderburgh. This was the boat he had sailed in from 1924 to 1936 and it became his again after a 21 year absence.

Gareloch Class racing is still going well today, and they can be seen in the loch on Tuesday evenings and Sunday afternoons, still flying as a class the distinctive Gareloch red burgee with a Rampant Lion on a Yellow Shield. But Dragons are nowhere to be seen.

The Garelochs now have an International Series which has been going since the 1980’s in conjuction with the Howth Yacht Club in Dublin and the Royal North of Ireland Yacht Club at Cultra, Belfast.

There is a 17th yacht, built by Dr V.Tothill in Trinidad in 1928. She was first named Limpie and subsequently became Vim, but her current situation is not known.