ONE of the best cricketers in the history of the Helensburgh club was, in the tradition of the sport in yesteryear, a player, not a gentleman.

So he was known to all as Bolton, not Harry Bolton.

Harry, who was born in Keyworth, Nottinghamshire, in 1873, first played for Keyworth Cricket Club in 1890 and went on to play for them for many years, returning home to do so for much of his career.

He played cricket for High Wycombe in Bucks at the age of 18, taking 76 wickets, before playing four seasons with Clackmannan County at Alloa as a professional from 1893, taking 258 wickets.

Two seasons as professional with Aberdeenshire at Mannofield, taking 162 wickets, and a year with Welsh club Llandudno followed.

He left for several years, but came back and played for the club again between 1921-34 — completing 24 seasons as the professional at Ardencaple. During this second period he scored over 2,200 runs and took over 900 wickets at 6.5 runs each.

A history of the Helensburgh club noted that on February 6 1901 the references of Harry Bolton cricket professional were considered and the committee agreed to make further inquiries about his work. On March 4 he was appointed for the summer at £2 15 shillings per week.

In his first game, against Dennistoun at Ardencaple, he took three wickets and made 32 runs, then hit 113 against Crookston — the first ever century by a Helensburgh player. In a match against Bothwell at home, Helensburgh passed 200 for the first time, with Bolton scoring 97.

His fast bowling was proving very successful and his batting significant. This had a dramatic effect on his team-mates, with many blossoming under his guidance. In 1901 nine matches were won and three lost, and the next year ten won and two lost.

He generally bowled unchanged throughout the opposition’s innings, and in his first five seasons he took 362 of the 695 wickets claimed by burgh bowlers.

In his second spell at the club he began on £4 15 shillings a week, partly paid by Ardencaple Lawn Tennis Club whose courts he maintained, and advised on preparing the wicket, as well as selling soft drinks in the pavilion.

He continued to set records. He took all ten wickets against Milngavie and Bearsden — a feat he had previously achieved for Clackmannan against Heritonians in 1895 — and they were all out for 10.

The president, Provost John F.Duncan, told the 1924 AGM: “No cricket club in Scotland has a more painstaking professional.” But at the same meeting they reduced his wage to £4 10 shillings.

He continued to take a lot of wickets, 77 in 1923 and 85 in 1924 — including a hat-trick against Hillhead High School FP. On August 9 of that year, playing against Weirs at Albert Park, he took his 1,000th wicket for the club and afterwards received a presentation.

Around this time a tribute was paid in the Glasgow Evening Citizen to his achievements on and off the field.

It read: “In the early part of the present century Ardencaple was not the ground it is today. Then the only cut part of the ground was the centre patch where the wickets were pitched, and the rest was something like a hayfield or even a bog.

“Rushes and grasses abounded, and 50 runs by any side was reckoned to be a good score. The improvement has been entirely due to Harry Bolton, who, besides attending to the ground work, found time to coach the Larchfield School boys and also bear the brunt of the attack in club games.

“While not shining as a batsman, yet he has performed pretty well, Bolton is highly esteemed by the members of the Helensburgh club, and he is likely to remain for a considerable time.

“Genial and obliging, it is not to be wondered at that he gets on so well with all the followers of the game.”

In 1934 he reached his 60th year, took 46 wickets to bring his total for the club to 1,660 and his total in Scottish cricket to a record 2,080, and in September ended his long and distinguished association with the club.

When he retired, he had scored over 4,800 runs for the club and dismissed over 1,600 batsmen. He was the oldest playing professional in the game, and one of the most highly respected.

“If it be true that we get the Elysian fields we deserve, I feel sure Harry’s particular corner will bear a close resemblance to the place he loved so well as it was on some sunny afternoon in the old days of May.

“It is from such a scene that one recalls him first, as a figure scything away in the long grass of a 1907 or 1908 outfield — no cutters then — wearing one of our father’s old panama hats, which we had exchanged with him for a nearly defunct cricket ball, its innards already making their way into the world.

“He seemed to us in those early days a somewhat taciturn figure, not given to unbending and not encouraging to small fry. W.M.Milne was our hero, and Harry as a player at that period remains in rather dim outline, a lithe, already balding man, leaping into the air and turning inwards as he bowled his off-spinners.

“It was when he returned to the club in 1921 that one came to know him and to recognise the character and goodwill, besides the capacity for feeling, that lay behind this seeming taciturnity.”

Norman commented that his batting and bowling figures spoke for themselves, but did not tell the whole story.

He continued: “It has been said of Harry Bolton on many occasions that we shall not look upon his like again, and that is probably as true as any statement that takes liberty of the future.

“But it can well be said of him that he was a man of sterling worth, a grand servant to his club and yet one who stood firmly by his own principles.

“And he had his own fixed ideas of right and wrong! Once, when we were visiting a club with an extremely fiery wicket, they produced a fast left-arm bowler of somewhat erratic length, reputed —magic initials! — to have played for the M.C.C.

“Whether he was M.C.C. or not, he certainly took advantage of the conditions, and we had to endure an early version of what was later to be known as body-line bowling.

“In the middle of the onslaught Harry came down the wicket to speak to me. ‘Wait till he comes in, Mr Norman, and I’ll sort him,’ he said. And sort him he did.

“The M.C.C. man was a left-hand bat as well as being a left-arm bowler, and in his first over Harry got one to rear up that took him by surprise and on what may be termed the south-west corner of his anatomy.

“A second ball got him on the other half, and third, rearing perpendicularly, struck him on the funny bone and knocked him as flat as a flounder. ‘Ar,’ said Harry as they carried the unfortunate cricketer to the pavilion, ‘I knew as ‘ow I should sort ‘im!’ It was probably the greatest fluke of the century, but justice had been done.”

The obituary concluded: “There were many instances of a different character that showed his wisdom as a man and a cricketer, his unspoken but deep pleasure when one of his ‘boys’ did well, his sense of humour that always loved the old gag and the oft-repeated chestnut, his craftsmanship, his pride in his job, and his always gentlemanly bearing.

“In that every good man is unique, very true it is that we shall not look upon his like again.” 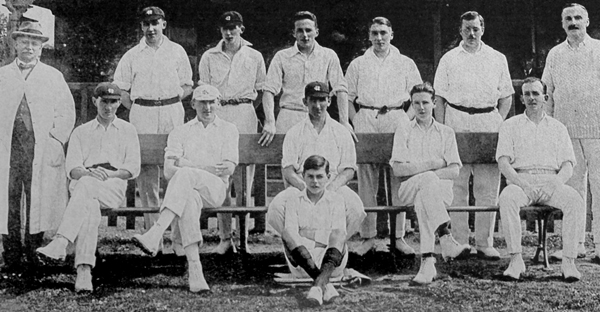