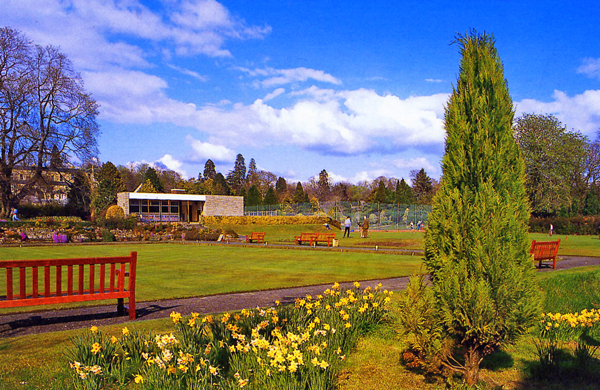 THE early records of Helensburgh’s Hermitage Park Bowling Club have been lost, but it is known how the bowling green 'for the workers' came into being.

The green was formed on what was formerly the mill pond for the Malig Mill, which stood at the rear of the Victoria Hall.

On October 8 1919 Sir Iain Colquhoun of Luss gifted the mill, dam, pond and ground to the south-east to the Town Council, and the mill was demolished around 1922.

A booklet marking 125 years of Helensburgh High Green, which was founded in 1861, recorded that a prolonged local campaign for the Town Council to provide a public bowling green culminated in the opening of the Hermitage Park green on July 9 1926 by Councillor R.R.Herbertson.

The following week’s edition of the Helensburgh and Gareloch Times gave a full and rather quaint account of the event. It read . . .

The Municipal bowling green in Hermitage Park, the practical answer to the hard annual at November Ward meetings “What about a working-man’s bowling green?” was publicly opened on Friday night in presence of a large gathering of townspeople by Councillor R.R.Herbertson, Provost John F.Duncan calling upon Mrs Herbertson to throw the first jack and deliver the first bowl.

Mr Herbertson, addressing the assembly, said as convener of the Parks Department the Town Council had honoured him by asking him to open that green. He could assure them he was extremely pleased to do so.

He thought that was rather an auspicious occasion, because for many years past the question as to whether they should have a Municipal bowling green or not had been a burning one, and it was now finally settled.

He hoped those who had so strenuously advocated the acquisition of the Municipal bowling green would roll up, if not in their thousands, at least in their hundreds, and make it an overwhelming success.

He did not pretend to be an expert bowler, and seeing he was going to play a game against the Provost in a few minutes, he might as well admit that he was an exceedingly bad player.

Nevertheless, he knew a little about the game, which he thought promoted sociability and fostered good fellowship, and for these reasons alone it was worthy of support.

More than that it was an ideal game for ladies, and he hoped the married men when they came up there they would bring their wives with them, that those men who are not married would bring their sisters or, better still, somebody else’s sister (Laughter) for he saw no reason on earth why ladies should not engage in bowling.

Now they had waited so long for that green that he did not propose to detain them longer. He had very much pleasure in declaring the green open, and he hoped it would be a source of health and happiness not only to the ratepayers but to visitors also. (Applause).

It had just occurred to him as Mr Herbertson was speaking that the old ‘tag’ that came up at the Ward meetings in November had now gone, and he wondered what some of those quibbling chaps would do now for a subject with which to heckle Councillors. (Laughter).

There was still another subject. Mr Herbertson had referred to the interest of the Council in the realm of sport, and the only thing left to quibble about in this direction was a Municipal swimming pond. (Hear, hear).

He was just wondering in his mind who they could make convener of the swimming pond — either ex-Bailie Sillars or ex-Bailie Somerville — but he was afraid that before the pond was started they would have some new blood in the Council.

He thought everyone gathered round that night would agree that the present Council had effected great improvements in Helensburgh. (Applause).

They had transformed Hermitage Park and the old mill and its environment into one of the most charming spots, which vied with any town in the whole of Scotland, and in that connection they were under a great debt of gratitude to their very excellent Park Superintendent, Mr Campbell.

Proceeding, the Provost concluded by saying that in Mr Herbertson he considered they had one of the most active conveners, and one of the most whole-hearted, and it was fitting that he should have had the honour of declaring the green open.

He was going to ask his better half, if it was possible for so good a man to have a better half, to throw the first jack and deliver the first bowl. (Applause).

This simple duty performed, Mrs Duncan, addressing Mrs Herbertson, said she had been requested by the Park’s Superintendent to ask her acceptance of a bouquet of flowers as a token of appreciation for the splendid ‘throw’ she had made that night.

A friendly game of an hour’s duration thereafter took place between rinks representing the Provost and Mr Herbertson, the result being a win in favour of Mr Herbertson.