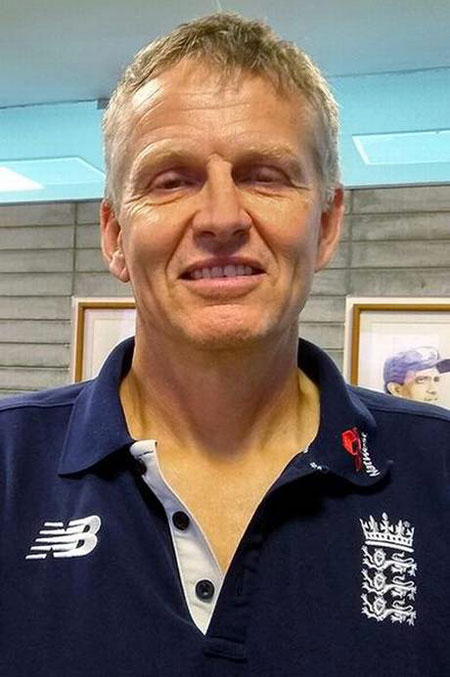 HELENSBURGH was the birthplace of a cricketer who played eleven tests for England and 306 matches in a first class career which lasted 19 years . . . and went on to become a top coach.

Right arm offspin bowler Peter Such took over 1,000 wickets, had a best performance in test matches of six wickets for 67 runs against Australia, and took five wickets in an innings on 49 occasions.

Now aged 56, he was born Peter Mark Such at 27 Cumberland Avenue on June 12 1964 to English parents, a Royal Navy Chief Petty Officer based at Faslane and his wife, a midwife.

He said: “My father served in the surface fleet, mainly frigates and destroyers, in the engine room. We lived in Helensburgh for less than a year, before moving to Edinburgh, where we lived for two years.

“After this my father left the navy and qualified as a teacher at Loughborough University before having a 30 year teaching career. Mum and Dad are both retired and live in South Nottinghamshire, as does my older brother who was born at Long Eaton.”

Peter played for Nottinghamshire, Leicestershire and most notably Essex. Coming in off a much longer approach than most of his slow bowling contemporaries, he relied mostly on patience, accuracy and subtle variations in flight and pace, rather than any mystery deliveries, to snare his victims.

It was his accuracy and natural economy, as well as his ability to bowl long spells and tie up an end — he once bowled 44 overs in a row in a day in a county game — that elevated him to international level, and he made his debut during the 1993 Ashes series on June 3, replacing John Emburey.

He made an immediate impact, achieving his best international figures of six for 67 on his debut, and featured in all but one of the tests that summer. He went on to feature in all three tests against New Zealand the following year.

However, he had to wait five years for his next chance at international level against Australia at Adelaide, and only had the opportunity to play a couple more tests after that, losing his place to Robert Croft or Ashley Giles, both also capable batsmen. His final test started on August 5 1999.

Batting was not Peter’s forte, although he does carry the dubious distinction of grinding out what is now the second-longest duck in Test history, clocking in at 72 minutes of stonewalling in what turned out to be his final test innings. His best test score was 14 not out.

He also made two fifties in county cricket, and it was at Essex where he gained most success — although he is perhaps best remembered for hitting the winning boundary on the second day of a Natwest Trophy semi-final against Glamorgan in 1997 when play had been suspended the day before because of bad light, with Mark Ilott and Robert Croft having an on-field confrontation seen on BBC TV.

Peter was the architect of the Essex Cricket Academy which, in its first three years, produced six county cricketers, including opener Sir Alistair Cook who scored a century in his England test debut and became one of the world's best batsmen.

He was also lead tutor on the England and Wales Cricket Board Level IV elite coaching programme and a specialist coach for the England under 17 and 19 squads.

He left the Essex Academy in 2005 to work with a global outsourcing company, and turned his attention to applying elite sports coaching skills to business environments.

His solid experience in business training and individual coaching made his blend of skills of great value to any organisation wishing to improve their individual and collective performance.

He was the England and Wales Cricket Board national lead spin coach from 2009-19, spending most of his time working with talented youngsters on the England pathway, but coach education also played a key role in his work.

He said: “An important part of my job was to pass on my knowledge to players and coaches alike. We have some exceptional coaches in our county pathways and it was great to be able to support them by giving masterclasses to county age group coaches.”

While he did not coach the England squad, his work was vital in the identification and development of the spin bowling stars of the future.

Peter, who lives on the Essex and Suffolk border, said of his coaching work: “I loved this role. Spin bowling is my passion so it was a perfect role for me. Coaching is one of those things that is as close as you can get to playing.

“I really enjoyed working with spin bowlers trying to help them become the best they can be, and hopefully go on and fulfil their ambitions.”

Looking at the challenges the three formats of the game bring to spin coaches, he said: “The basics of the game will always remain the same, but the most important thing you can do as a spin bowler is to spin the ball as hard as you can.

“That will get you the drop and drift in the air you need to get the break and bounce off the pitch, so no matter what you’re doing you need to spin the ball hard.

“It then comes down to the different sort of skills and attributes that you need to be effective in the three different formats of the game — and in 2020 four.

“But, whatever the format, the basics are the same, so with any young spin bowler you must encourage them to spin the ball hard and then, if they can, put that into a bowling action that is constantly repeatable.”

The fruits of Peter’s hard work were definitely visible in the 2018 Under 19 World Cup when some of England’s new breed of young spinners were on show and the side finished seventh.

He gave up the post in November 2019, and said of his departure: “I’ve loved the journey and consider myself fortunate to have been afforded the opportunity to work with our most talented young bowlers. I’ve enjoyed watching a number of them step up and make positive starts to their International careers.

“A large part of the role has involved working with talented spin bowlers around the county network. I’ve really appreciated the openness and the welcome I’ve received around the counties. It’s been a wonderful journey and I’m looking forward to continuing my passion for spin and coaching.”

Ashley Giles, managing director of England Men’s Cricket, said: “I’d like to thank Peter for his fantastic contribution to the England Performance Programme and for his dedication to developing our best young spin bowlers.

“His thorough approach to training and development has seen our players gaining invaluable experience on pitches around the world under the tuition of some of the best spinners in the game.

"This has helped create an exciting new pool of spinners that will hopefully support the success of the England Men’s team for years to come.”

Among those who progressed through the performance pathway under his guidance were Jack Leach, Zafar Ansari, Dom Bess, Mason Crane and Matt Parkinson, who have all been selected in the England team in recent years.