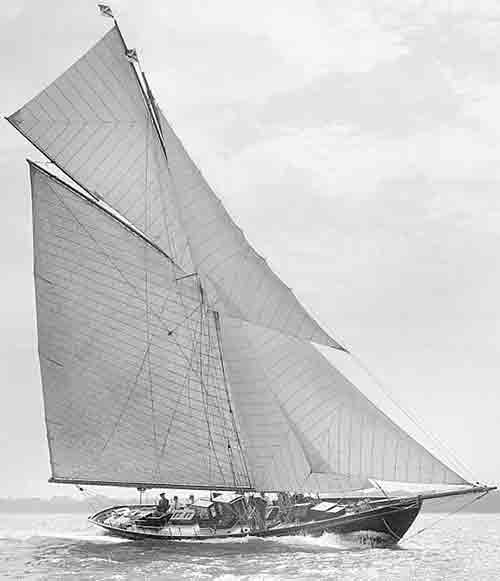 THE outstanding success of Helensburgh man Steven Park as manager of the Team Great Britain sailing team at the 2008 Beijing Games in China kept up a 100 year-old burgh connection with that sport in the Olympics.

As London prepares to be the host city in 2012, it is worth remembering that when the capital hosted the 1908 Games one of the sailing events was held on the Clyde . . . and in the winning 12 metre crew were a Helensburgh man and another from Rhu.

They were Arthur Downes, then 25, who had qualified as a doctor only a fortnight before the Olympic finals and went to practice as a GP in the burgh for over 40 years before his death in 1956, and 24 year-old villager John Buchanan, who later won the 1936 Tarbert Cup in his 8 metre yacht Falcon and died in 1943.

The event was commemorated at the end of August in the Dunoon 12 Metre Challenge.

Yachting on the Clyde took off in the Victorian period, to the point where the Clyde was second only to Cowes on the Isle of Wight in popularity.

After establishing a base at the Royal Marine Hotel in Dunoon, the club became highly successful and in 1887 was ready to launch a challenge for yachting's premier event, the Americas Cup.

But one member had another ambition in mind, and he realised it in 1908 with the help of the two local men.

Thomas Jnr was able to devote himself full-time to his many interests, from sailing to Antarctic exploration. Part of Antarctica is known as Coatsland after an expedition funded by Thomas and his brothers.

Yachting was his first love, and he assembled a crew on the yacht Hera, built in 1908 by R.McAlister, with the intention of challenging in the 12-metres class at the London Olympics.

Early Olympics could be strange affairs, international travel was slow and expensive, and the 1908 event was hit by an Italian financial crisis which saw the Games switched at short notice to London, and by political boycotts which further affected entries.

As a result in yachting there was very little international competition, and in the 7 metre class there was only one entrant.

Two boats contested the 12 metre class, the Hera, and the Merseyside yacht Mouchette, owned by the son of a Scotsman, Charles MacIver.

It seemed silly to send both boats to Cowes, where the other yachting events were held, and so both owners tossed a coin to decide where the event should be held. Glen-Coats won, and so an Olympic event came north for the first and so far only time.

The competition, organised by the Yacht Racing Association, was to be decided over a three-race series, and the event became a national contest, with the Hera crewed by men of the Clyde, and Mouchette by Merseysiders, although they were extremely friendly and sportsmanlike.

On home waters, the crew of the Hera, under the watchful eye of their captain, Glen-Coats, convincingly won the first two heats on August 11 and 12 and took the title, although in the second race the Hera was somewhat fortunate in that Mouchette's start was partially blocked by an anchored steam yacht, Hebe, which gave them an early advantage.

With two victories the third race was cancelled as it was not necessary, the Scottish crew had proved superior, and their triumph was cheered by the crew of the Mouchette, in the true spirit of the Games.

The other members of the gold medal-winning crew were Henry Downes (37), who may have been a relation of Arthur, David Dunlop, James Bunten (33), John Aspin (31), Gerald Tait (41), John Mackenzie (31) and Albert Martin.

The Hera had a long career of sailing after her Olympic triumph, until she disappeared off the coast of Argentina in 1950.

Thomas Glen-Coats succeeded to the Baronetcy of Ferguslie Park on the death of his father in 1922, and, despite marrying at the age of 57, died childless in 1954, with the title dying with him.

The success of the Hera and the Royal Clyde Yacht Club laid the foundations for continued Scottish success in the sport — and for the achievements of Helensburgh men Michael McIntyre, Star class gold medallist in Seoul, Korea, in 1988, and now Steven Park.

The commemorative event was a rerun over the same course in 12 metre yachts under the guidance of the Royal Northern and Clyde Yacht Club.

Scratch crews were made up of Royal Navy and amateur volunteer lovers of the sport. Onshore facilities were provided by the Holy Loch Marina and accommodation at Castle Toward, the family home of Glen-Coats.