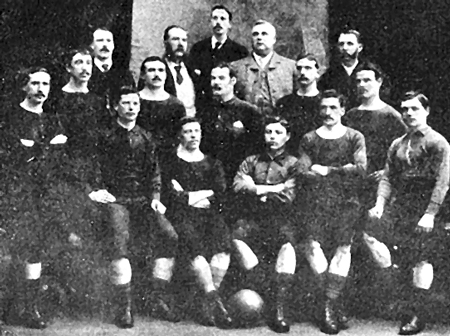 A CARDROSS footballer of yesteryear could lay claim to being a champion of the world.

Born in the village on October 2 1865, Robert 'Bob' Robinson Kelso began his football career with Renton as a defender, and with them he won the Scottish Cup in 1885 and 1888 and played in the unsuccessful 1886 final.

He also won the Champions of the World title in 1888 when Scottish Cup winners Renton defeated English FA Cup winners West Bromwich Albion. The world championship-winning side is pictured (above).

He moved to Newcastle West End in 1888 and then to Preston North End the following year.

With Preston he won the English Football League championship in 1889-90 before moving to Everton in 1891 where he played in the 1893 FA Cup final. He briefly guested for Liverpool in the Lancashire League in 1892.

He returned to Scotland in 1896 to play for Dundee, where he earned selection for the Scottish League representative team, before ending his career with a brief spell at Bedminster Town.

His nephew Tom Kelso (left), who was born in 1892 and also lived in the village, was a successful footballer too, and he played for Third Lanark, Manchester City, Dundee, Rangers and Dumbarton.

A hard-tackling right back, he played for Rangers throughout the 1914-15 season, and the following season for Dumbarton — for whom he briefly returned in season 1918-19.

He gained one cap for Scotland, playing against Wales in a British Championship match at Parkhead in February 1914, which ended 0-0.

Tom, who had a leg amputated at the Vale of Leven Hospital in the spring of 1972, remained a keen Dumbarton supporter until his death in 1974 at the age of 91.

Of his playing days he said: “We really played football then, but things have changed, and the style is completely different today. I much prefer the way we used to play.”