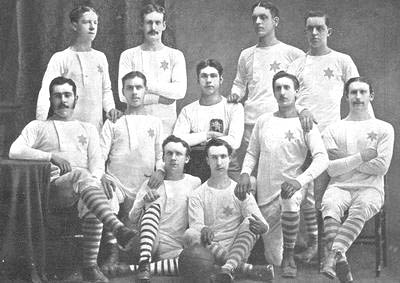 A RHU man was one of the founders of a Scottish sporting institution, Glasgow Rangers Football Club.

Moses McNeil (seated, right), who formed the first Rangers team in the west of Glasgow in 1872 with his brother Peter and two friends, was the son of John and Jean McNeil.

Jean Bain was from Downpatrick in County Down and when she moved to Scotland in search of work she married John McNeil, a gardener in Comrie, Perthshire, and they moved to Rhu when he became gardener at Belmore House, Shandon.

Moses McLay McNeil was born in Rhu on October 29 1855, although his birth certificate gives the spelling of his surname as McNiel. He died on April 9 1938, and was buried at St Modan’s Churchyard at Rosneath.

Moses formed the first Rangers team with brother Peter, who ran a sports shop in Glasgow, and friends Peter Campbell, from Craigellan, Garelochhead, son of a shipping entrepreneur, and William McBeath, after being inspired at the sight of the new sport of football being played at Kelvinbridge.

The team played its first games on Glasgow Green before moving to Govan and Ibrox Park, and in less than a decade he led Rangers to a position of power in Scottish football and within the newly formed Scottish Football Association.

It was Moses who christened the team Rangers, derived from the name of a famous English rugby club.

The founder team members included the Vallance brothers,Tom and Alexander, from Shandon. A third Vallance brother, Andrew, was gardener at Cromalt in East Clyde Street, Helensburgh, latterly for journalist and author Neil Munro — who kept him on and doubled his wages.

For the first 18 months Rangers played friendly games against other Glasgow teams, and they won their first competitive game 2-0, a Scottish Cup tie against a side called Oxford, with Moses one of the scorers. He was also the club’s honorary treasurer for a time.

Rangers official historian David Mason says: "Moses remains one of the most significant characters in the club's history.

“One of oldest trophies in the Ibrox Park trophy room was presented to him in 1886 for winning the half-mile race. He was an accomplished athlete and he lived long enough to see the club he formed become a world-renowned institution."

He is described in the Rangers history books as a dribbling winger who took no nonsense in the tackle and gave as good as he got.

He was also the first of 16 players to have signed for Rangers more than once — he left the club in 1875 to play for Queen’s Park, but returned to his first love, the Light Blues, by the end of the following month.

In 1876 Rangers had their first internationalist, when Moses made his Scotland debut in a 4-0 vi

He played for Rangers in the Scottish Cup finals in 1877 and 1879, on both occasions against the Vale of Leven, but his name disappeared from the Govan club's history books after 1882. His brother Harry (left) also played for the club.

Moses, who never married, worked as a commercial traveller, but after his retirement from the game he was never involved in soccer again.

David Mason says: "It appears that he either fell out of love with football or else passed on the torch he helped light, because he saw the club had a sound future ahead of it."

Moses lived with his sisters Elizabeth and Isabella in a cottage in Clynder. Records show that he died of heart disease at Dumbarton’s Townend Hospital. His death went unnoticed at the time by the press and media and he had nothing to leave in his will.

A tiny death notice in a Glasgow newspaper — the smallest in the paper that day — confirmed his burial at Rosneath, as do the official burial records. His sisters were also buried there, but there is no marker of Moses final resting place in the graveyard.

Peter McNeil died in 1901 at Hawkhead Asylum near Paisley, having been driven insane by business worrries. Tom Vallance died in 1935, but Peter Campbell drowned when his ship, the Saint Columba, went down in the Bay of Biscay during a storm. It was carrying coal from South Wales to Bombay.

William McBeath died penniless in 1917 and is buried in a pauper's grave in Lincoln, after living in a poor house for the last seven years of his life.

■ Members of another Rhu family played significant parts in the history of Rangers.

James Parlane was at Ibrox as an inside forward in the Willie Waddell and Willie Thornton era, between 1945 and 1950, and his son Derek played at Ibrox as a striker for 10 years from 1970.

It is thought that they were the only father and son to have played for the club at that stage. It was Willie Waddell who signed Derek, and he and Willie Thornton visited market gardener Jimmy Parlane’s home in the village to complete the signing of the young Hermitage Academy pupil.

He made his first team debut in the second leg of the semi-final of the 1972/73 European Cup Winners Cup against Bayern Munich at Ibrox and scored the second goal in a 2-0 victory. However he was on the bench when Rangers beat Moscow Dynamo 3-2 in the final in Barcelona.

At Ibrox he won two league championships, three Scottish Cups and two Scottish League Cups and was capped by Scotland 12 times with one under 21 cap. While at school he won Scottish amateur caps.

Derek went south to play for Leeds United, then in 1983 was signed for Manchester City by then manager Billy MacNeill, the former Celtic captain. After stints with Swansea and Rochdale, and also in Belgium and New Zealand, he returned to Scotland in 1987 and finished his senior playing career at Airdrie.

■ HELENSBURGH also has strong connections with the Ibrox club. Former Rangers and Scotland goalkeeper Bobby Brown and former manager and chairman Walter Smith have both lived in the burgh for many years.

A number of players from England and abroad made Helensburgh their home during their time at Rangers, including Terry Butcher, Mark Hateley, Chris Woods, Brian Laudrup, Jonas Thern, Basil Boli, Jorg Albertz and Stefan Klos.

■ MUCH further back, Rangers also played Helensburgh Football Club on two occasions in the late 1800s. Helensburgh drew one game and lost the other. A player who represented both clubs at different times was Scottish international goalkeeper Matthew Dickie (see 'Early Goalkeeping Star' article in this Sport section).

At New Year 1874 Garelochhead were beaten 3-0 by Rangers at Garelochhead, while Helensburgh drew 1-1 with Rangers in September 1875. This game was played at Burnbank, then Rangers home pitch.

There is little doubt that these games came about through the local connection with the McNeil brothers and the Vallance brothers in the first Rangers team.

■ CARDROSS too has a Rangers connection, as villager Tom Kelso played at right back in the 1914-15 season. He also played for Third Lanark, Manchester City, Dundee and Dumbarton, and gained one cap for Scotland in a British Championship match against Wales — a 0-0 draw — played at Parkhead in February 1914.