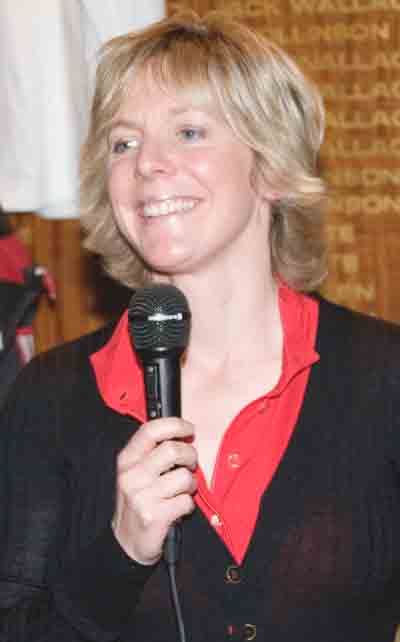 The former Hermitage Academy pupil, whose parents still live in the village and who once took part in Helensburgh's Ne'erday Swim, is one of BBC Sport’s most experienced and versatile broadcasters.

A regular presenter of Grandstand, Sunday Grandstand and Ski Sunday, she is also the face of snooker and athletics coverage and frequently fronts the sports section on BBC News.

During the Luss tournament she has a busy schedule with boat trips, historical tours and celebrity meetings planned — all on camera, of course, to do the beautiful surroundings justice.

An integral part of the BBC’s coverage of all major events over the past 19 years, Hazel presented from Athens in 2004, marking her fifth consecutive Olympic Games.

She has also worked on every Winter Olympics and Commonwealth Games since 1994 and reported from the football World Cup Finals and European Championship finals since 1990.

In golf, she is the anchor for the Women’s Open and reports on the Open, the Ryder Cup and the Solheim Cup. Hazel’s many other credits include Final Score, Football Focus and Wimbledon.

In addition to her role at BBC Sport, Hazel hosted the coverage of the 60th anniversary of the D-Day landings in 2004, the Children In Need appeal for BBC Scotland, and anchored its Millennium Night coverage.

She was the winner of the Royal Television Society Award for Best Regional Presenter/Reporter in 1999.

Hazel is a graduate of the University of St Andrews where she gained an MA Honours degree in Art History.

She has representative honours in golf — and, like her father, is a member of the Cardross club — netball and athletics, and gained a full vest for athletics from Scottish Universities. Currently she is the chairman of the West of Scotland Institute of Sport.

A proud supporter of Dumbarton Football Club for many years, she is a member of the Sons Supporters Trust Ltd. and gladly assisted in testimonial fund raising for kit man the late Dick Jackson and this year for long-serving full back Craig Brittain.

She was also honorary president of the now defunct Dumbarton FC Supporters Association.