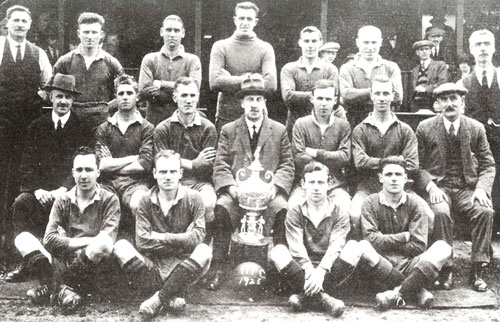 A BRIEF history of Helensburgh Football Club has been put together, mainly from newspaper archives, but also from two people who attended home matches.

Looking through the newspaper archive there are no games recorded for Helensburgh FC between 1886-89. The club was a founder member of the Scottish Football League division three in 1923 and left the League when the third division was disbanded near the end of the 1925/26 season, although they continued to play in other leagues.

What has also become clear is that there were numerous football clubs in Helensburgh as well as various playing areas (see the notes at the end).

A new football club has been formed under the title of Helensburgh Football Club. The Helensburgh Cricket Club has kindly granted the use of its park for practice. At Ardencaple Park on Saturday afternoon, before a good number of spectators, this newly formed team won their first match 6-0.

"The visitors won the toss and the hometeam kicked off. Aided by a strong wind they soon bore down on their opponents stronghold, where, from a judicious centre by the left wing, the ball was put through. The leather was again put in motion, and after some fine passing on the part of the home forwards, and the centre being on the spot he had no difficulty in adding two more points."

The Field of Play has been the most difficult area to identify.

"The pitch was east-west, between the burn and the cricket ground. There was a tall corrugated iron fence at the woods [east] end to stop balls going too far behind the goal. The pavilion 'and some sort of enclosure' was on the north side. Entrance to the ground was effected off the main road and via a track. The pitch was always a quagmire and they reckoned it was worth a two goal start!"

An aerial photograph was taken in 1936. The field in the top left corner was Ardencaple Park where Helensburgh FC played as did the Cricket Club and now the Rugby Club. Right in the middle of the field was what we think is the pavilion for Helensburgh FC.

"A meeting was arranged with the Cricket Club about the use of a piece of marchy land behind the cricket club which was once a football park, which had a terracing and was home to Helensburgh FC."

We also know that Helensburgh Rugby Club have put a lot of time and money into improving the playing area since 1971. They not only had to work on the drainage but it was on an incline which they had to level.

The Helensburgh Advertiser of 30th September 1966 has an grainy aerial photograph, taken in 1936, which appears to show a building where we understand the football pavilion to have been. This may be the only photographic evidence of the the Helensburgh Football Club ground.

Crowd Attendance was generally only talked about in terms of "a good crowd of spectators attended" according to the newspaper archives. Occasionally a match report would mention 100 attended this match, 200 spectators at that match. It would seem from the scarce mentions of gate money that up to 200 may have been the average attendance.

The record attendance, however, was the cup-tie between Helensburgh and Royal Albert at Ardencaple in the first round of the Qualifiying Cup when 2,000 supporters attended. They also had a record gate of 1,500 set at the Scottish FA Cup first round replay against Bo’ness on January 28th, 1925, which finished 0-0. They also played Aberdeen at Pittodrie in front of 14,000.

Season tickets appear to have come into play at the end of 1903. After some crowd trouble among the 200 or so spectators, the committee decided that anyone not possessing a season ticket would not be allowed into their field to watch games.


Beginning of the end

F.W.McMillan, President of Helensburgh FC called for a meeting of the third division teams in Central Halls, Glasgow. Several clubs were financially embarrassed, partly on travel expenses, partly on arrangement of fixtures. It was decided to approach the League Management Committee to request help.

"The affairs of the third division of the Scottish Football League appear to be in a serious condition. The long railway journeys, to away games, have killed this league. Mr F.W.McMillan( Helensburgh FC) called for a meeting of the teams to be held in Glasgow."

"Several clubs are financially embarrassed, partly on travel expenses, partly on bad arrangements of fixtures. They decided to approach the League Management Committee to request help."

Helensburgh FC, like most other teams, had to raise money over and above the gate money. In 1927 their average weekly gate money was £20 and they needed to raise a further £12 weekly on top of that.

With grateful thanks to Helensburgh Library, Paul Smith, Dr Martin Everett (Lomond School), Malcolm Osborne, Donald MacAllister, Jackie Payton, and Bill Wilkie of Helensburgh, for all their help in compiling this history.

There were local other clubs. Perhaps further research at some time will list all these teams, where they played etc.

We have been finding out some more background to the club, which can be viewed here Latest information

It was a surprise when doing this research to find out the extent of football in Helensburgh. We have placed the Helensburgh FC pitch where Helensburgh rugby is now played. Not only that but we also found out that Glasgow Rangers played Hermitage Former Boys at Ardencaple and that Hibs played Helensburgh FC on a pitch that is now Kirkmichael. There is a 13 page pdf download available of some of the material we gathered and it can be found on the home page under Downloads.