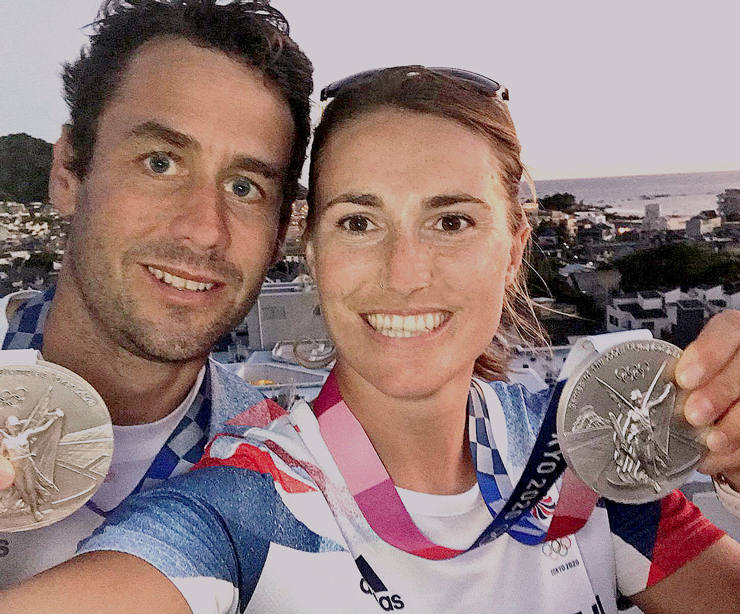 THE SILVER medal Anna Burnet won in the mixed Nacra 17 class at the Tokyo Olympic Games was greeted with delight at the Royal Northern and Clyde Yacht Club at Rhu, and by the whole Helensburgh and District community.

It was the climax to date of the 28 year-old Shandon girl’s remarkable career in sailing which began at the age of five in an Optimist dinghy in the Gareloch.

It was also the latest triumph of a very sporty family, fully supported by parents Colin, who was born and grew up in Shandon, and Louise.

Her oldest sister Naomi (30), who lives in British Columbia in Canada, has completed Ironman Triathlons — a 2.4-mile swim, a 112-mile bicycle ride and 26.22-mile run, raced in that order.

Younger sister Fiona (24) works in London for Parliament in International Relations, plays hockey for Scotland and has over 70 caps. As a youngster at Helensburgh Tennis Club she represented Scotland in the U12 Four Nations Tournament at the age of ten.

Her grandfather, William Burnet, played rugby for Scotland, and her uncle, Sir Peter Blake, was a New Zealand yachtsman who won the 1989–1990 Whitbread Round the World Race.

He also held the Jules Verne Trophy from 1994-7 by setting the around the world sailing record as co-skipper with Robin Knox-Johnson of ENZA New Zealand, and led New Zealand to successive victories in the America’s Cup.

Sir Peter was shot and killed by pirates while monitoring environment change on the Amazon River on December 5 2001 at the age of 53 when she was nine. His widow Pippa is Louise’s sister.

Anna remembers him fondly. “He was away a lot but we followed closely what he was doing and he was a massive inspiration,” she said. “It’s amazing to have that level of inspiration in your family.

“Both my parents are keen sailors and grew up next to the sea, and I definitely inherited their passion for sailing.

“I couldn’t have asked for a better place to grow up and I actually loved my school days at Rhu Primary and Lomond School.

“I loved all sports but spent a lot of time doing tennis and sailing. At about ten I had to choose between the two because training and competitions were every weekend.

“Luckily I picked sailing, but I remember almost being swayed towards tennis because the cold, wet winter training at Cumbrae wasn’t always fun!

“My mum’s career as a professional flautist definitely had an impact on me and my sisters.

“She has a passion that she pursued from a young age and worked extremely hard to be best — so she definitely understands the mentality and always encouraged and pushed for us to pursue our dreams.

“My dad too – his complete passion is sailing, and I’ve always loved that we share that. He’d be happy spending his whole life on a boat!

“My parents gave up a lot of their time driving me down to the south coast from Scotland for training camps and events.” 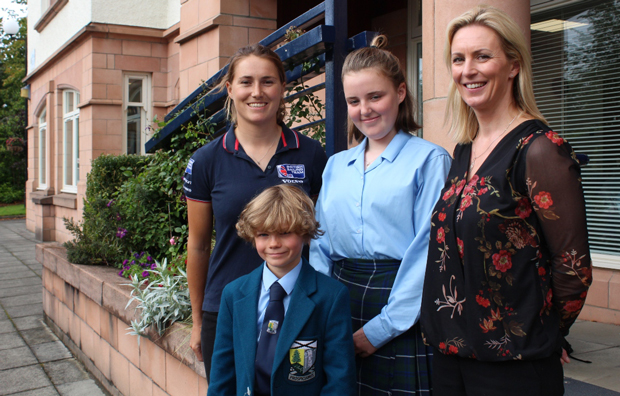 The first major achievement on the water by the then Lomond School pupil (pictured right with headmistress Johanna Urquhart on a visit to the school to speak to pupils) was when she won the female national Optimist title and was selected for the British worlds team in 2006 at the age of 14.

At youth level, she won the 420 nationals with Flora Stuart, before moving to the 470 class and taking silver and bronze at the Junior Worlds in 2012 and 2013.

She continued to race in the class while doing a BSc in Sports Studies at Southampton University.

Now living in Weymouth, Dorset, she met John Gimson, a sailor with big wins in different classes and a burning desire to win an Olympic medal.

He had settled on the Nacra 17 for his Tokyo campaign and trialled various sailors for the crew spot. Communication was key, and with Anna things clicked from the start.

“Getting to sail with John was the game-changer,” she says. “I’d had 10 years of 470 training alongside Hannah Mills and Saskia Clark.

“That was eye-opening for me, seeing the way they trained and what’s really required. The kind of things they were doing, I had no idea you needed to do.

“I wasn’t very technically minded, particularly on the gear side of it. It’s hard to see that stuff until you’ve got someone to really learn from.

“But sailing with John got me to that point. I got lucky to team up with him. We have really complementary strengths. He is a very talented sailor and very technical.

“I think I am good at moving around the boat and handling all the boat speed stuff. When we are on form and in the flow, focussing on our different roles, it really clicks. We are both very calm people, we never shout at each other on the water and we get on really well.

“I have definitely matured a lot in this campaign. When you’re younger you can be more hot-headed, but there is no space for it on a boat. It has to be 100 per cent trust in the other person.

“The Olympic trials were unbelievably tight because only one boat is selected for GB in each of the sailing disciplines. We had a year of trials regattas which was mentally very tough and also exhausting.

“We always said if we could win the British trials and be selected we would have a pretty good chance of winning an Olympic medal, so just kept our heads down and gave it everything.

“I love sailing the Nacra 17, it’s a really fun and dynamic boat and we’ve been lucky to have an amazing training group with the Argentinian, Austrian and Italian teams.

“We push each other hard on the water but those guys have become great friends and there’s always plenty of joking.”

In Tokyo they stayed in accommodation solely with the British sailing team and everything was very locked down because of Covid.

They had to do Covid tests every morning and could not go outside the accommodation apart from getting into a car to go to the sailing venue.

“There was no mixing with other nations or sports but luckily we get on really well with the rest of the British sailing team and we had an amazing time with them!” she said.

“Day One of the Olympic racing was nerve racking — I have never been so nervous in my life! But once we got racing and into the swing of things you don’t have time to think about the nerves or the occasion and it’s basically back to what you know.”

Mum Louise said: “They’ve been a great team together and it’s a massive passion for them both. They are really good friends and you need that partner you click with.”

With fellow Lomond and Royal Northern sailors Charlotte Dobson and Luke Patience coming close but not medalling at Enoshima, the spotlight fell on John and Anna. 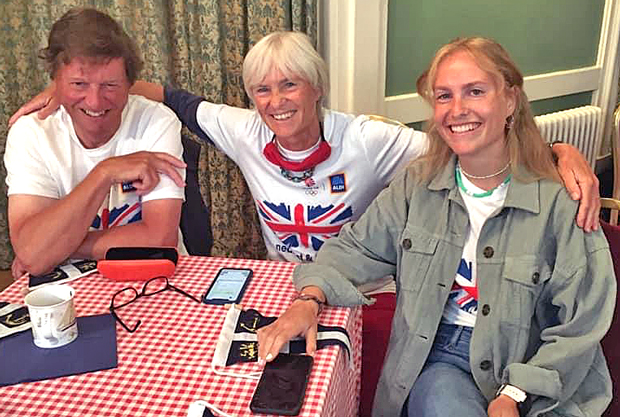 During the medal race, their supporters cheered at the Royal Northern, of which Anna was made an honorary member earlier in the year, while enjoying 58 filled rolls from the Brae Shop — its largest ever single hot food order.

Louise told the PA News Agency: “We would never ever have dreamed of this. We’re completely over the moon, the silver medal is an awesome result.”

The chief executive of sportscotland, Stewart Harris, said: “Scotland has a proud tradition of successful sailors on Team GB and it’s terrific to see Anna Burnet join that illustrious list.

“To be selected to compete at an Olympic Games is a huge achievement, but to win a silver medal is very special.”

The Provost of Argyll and Bute, Helensburgh and Lomond councillor David Kinniburgh, said: “Congratulations on her outstanding silver medal success.

“Anna is an incredibly talented sailor who followed her dreams and, through sheer hard work and determination, has gone on to win one of the greatest honours in the international sporting world.”

As a tribute to Anna’s medal success, sister Fiona (pictured right at the Yacht Club with parents Colin and Louise), who won Euro Hockey Championship II gold with the Scotland women’s hockey team in 2019, and the RNCYC’s vice-commodore, Linda Pender, wrapped the postbox in Shandon in silver foil.

This echoed a gesture made nine years ago after Luke Patience partnered Stuart Bithell to a silver medal at the London Olympics. 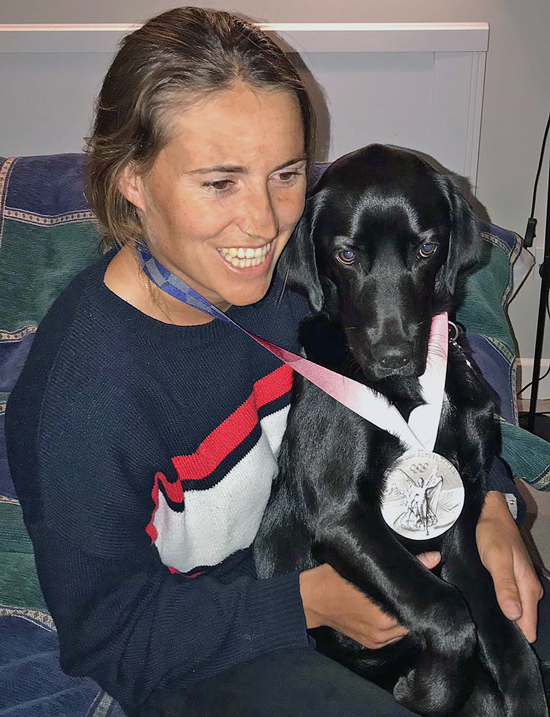 Looking to the future Anna (pictured left with the family pet, a Springador called Mac) said: “I still love to do as much sport as I can, but the last few years have been so full on with sailing it’s usually impossible to find the time or energy to do anything else!

“I do quite a lot of training on a road bike, which is mostly for fitness but I also really enjoy exploring by bike as it’s a good way to see the places we travel to.

“After Tokyo I managed to get home for four days to see my family and a few friends, but that definitely wasn’t long enough and I can’t wait to get back for a proper break.

“There are only three years until the Paris Olympics and that is going to fly by, so the next few months are a balance of getting the 2024 campaign on track and making sure we’re rested and ready to take it on.”

In September Anna and John added to their Tokyo Olympics silver medals by being crowned European champions in the Nacra 17 class in Greece.

They won European Championship gold in the discipline, finishing more than 30 points ahead of their nearest challengers. This followed the world title the duo claimed in Geelong, Australia, last year.

Whilst most other Olympic competitors decided to take a break out of the boat following the games, they opted for racing experience and secured the Euro title with a commanding cushion in Thessaloniki.