AN AMERICAN golf club holds an annual club tournament called ‘The Battle of Glen Fruin’ — and now it plans to create its own monument to the 1603 battle.

John Vernasco, from Chicago, Illinois, contacted Helensburgh Heritage Trust to find out the dimensions of the Trust monument at the west end of the glen to those who died in clash between the Colquhouns and the MacGregors.

His club is called Merit Club, and it is situated at Libertyville, Illinois, 45 miles north of Chicago. Fellow member Mark Jensen created the event 15 years ago after reading about the battle.

John explained: “We split up the club into two teams based on the two clans, Clan Colquhoun and Clan Gregor. It’s the premier event of the year for our golf club.”

On the tenth anniversary of the event in 2015, a party of 48 members of the club travelled to play it over the Loch Lomond course at Luss.

Mark said: “One of our traditions is The March of the Pipers up our 18th fairway on the evening of the gala opening reception dinner.

“In 2015 we were fortunate enough to have enlisted the services of the Caledonian Cowboy Collective, led by Mr Johnny Gaud. Johnny and his colleagues were outstanding, and Johnny served as our Master of Ceremonies.

“The trip was truly amazing and, for a group of gentlemen, it is still spoken of reverently as the most amazing experience of their lives.

“This year we are having Johnny and twelve of his pipers and drummers making the trip to the states for the 2020 tournament.” 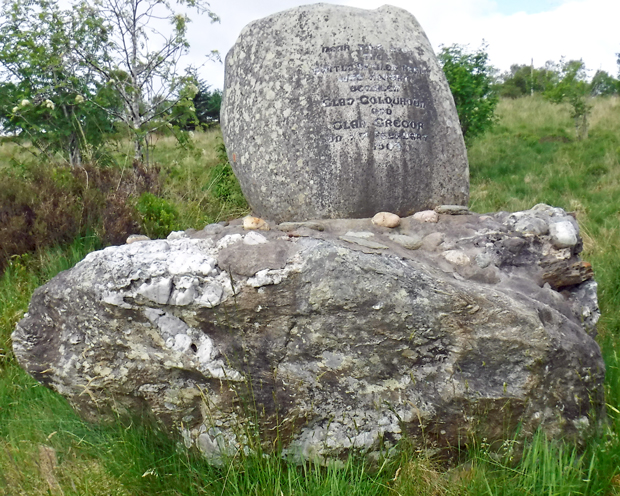 Currently the club is working on building a replica of the Fruin monument, and they hope to host a dedication during this year’s event in early October.

John is working with landscape architects to build the monument with rocks and stones from the Chicago area, and wants it to be of a similar size.

The Trust memorial was erected in 1968 at the west end of the glen, looking east over the area where the famous battle took place on February 7 1603, and was refurbished and an information board erected in recent years.

It was actually built by two English soldiers after local artist Gregor Ian Smith, who lived in the glen and had campaigned for several years for the memorial, sought the help of the Army Training Camp at Garelochhead.

On top of a huge boulder brought there by glacial action, they placed a smooth-faced granite boulder from the bed of the River Fruin. A local stonemason created an appropriate inscription.

In fairness to the raiding clan — the MacGregors — James Kirkpatrick, a timber merchant, decided that the cairn must include stones from their territory. He travelled to Balquhidder in Perthshire and brought them back to be cemented in place.

The boulder is 32 inches high at the front and 19 inches at the back, the diameter at the top is 25 inches, and its circumference at the base is 79 inches.

The base projects about 24 inches from the boulder, but at its smallest it projects only 12 inches. It is made of a variety of stones of various shapes and sizes, some of which are white quartz.

The information board beside the monument tells the story of the battle . . .

It is difficult to get historians to agree what the facts were about the Battle of Glen Fruin.

However they will agree that a battle took place there on the 7th February 1603 between the Colquhouns and the MacGregors, that the number of Colquhoun dead was very much greater than MacGregor dead, and that the MacGregors were subsequently severely punished for their actions.

The MacGregors were already in trouble with the Scottish state, and three months before the battle they had launched another raid on Colquhoun lands.

As a result of this attack it was decided that Colquhoun widows should take the bloodstained shirts of their dead husbands to King James VI as a protest. He in turn granted the Colquhouns the right to pursue the MacGregors.

An alternative tale is that two MacGregors travelling through Colquhoun lands were refused hospitality, and so killed and ate a sheep. For this act they were caught and hanged — which gave the Clan MacGregor the desire for revenge. However many historians dispute that this ever happened. Whatever the truth, the stage was set for the Battle.

It is said that the MacGregors and their allies arrived at the top end of Glen Fruin first, and they split their forces in two and hid.

Instead of following the Fruin upstream, the Colquhouns and their allies came up Glen Luss and then through Auchengeich Glen, where the MacGregors launched a surprise downhill attack on them.

The Colquhouns turned back and were then ambushed by the second half of the MacGregor forces. A fairly commonly accepted figure is that 140 of the Colquhouns and their allies were killed, although some accounts have put the number as high as 200.

On the other hand most traditional accounts have said that only two MacGregors were killed, which seems an unrealistically low figure.

Not content with having routed the Colquhouns, the MacGregors then carried off or destroyed the “hail plenishing, guids, and gear of the . . . land of Luss”.

The Colquhouns again went hot foot to King James VI. Just 17 days after the Battle, the King and the Privy Council settled the future of the MacGregors.

The decision was that “that unhappie and detestable race be extirpat and ruttit out, and never suffered to have rest or remaining within this country hierafter”.

The very act of using the name MacGregor was “altoggidder abolisheed” on pain of death.

It was also perfectly legal to hunt down the MacGregors like animals and indeed bloodhounds were used against them on occasions.

These measures remained in force until 1775, albeit with a 30-year gap in the late 17th century during the reign of King Charles II whose restoration the MacGregors had supported.

So, although the MacGregors had won the battle of Glen Fruin, they most certainly suffered as a result of having gained this victory. 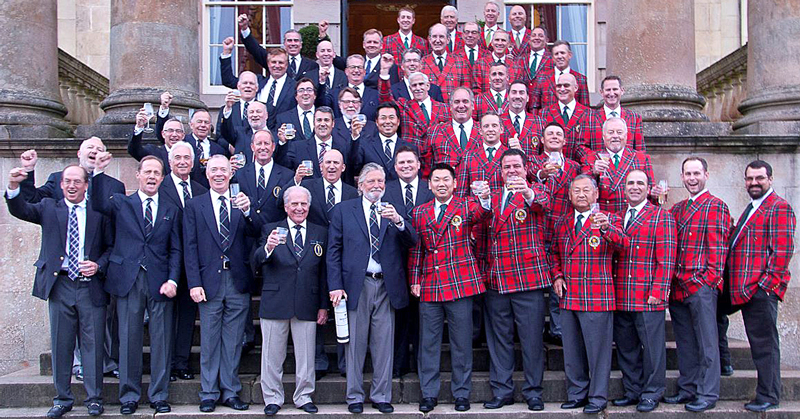 The Merit Club teams at Rossdhu in 2015. The Colquhouns (Mark Jensen front fifth from left) are in blue blazers.