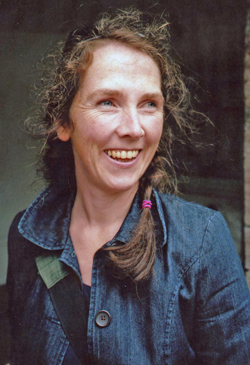 During her years in the burgh Charlotte, who recently married local reference librarian Mike Davis, became very well known, both in the Charles Rennie Mackintosh mansion itself and through speaking about it to local organisations.

As so many local people have visited Hill House, and because Dumfries House has been very much in the news, partly because of a campaign led by HRH The Prince of Wales to save it for the nation, Charlotte has written about her respective roles in the two properties . . .

My first few weeks as Curator at Dumfries House in East Ayrshire were shrouded in a mystery for one of my new colleagues.

Whenever a visitor from Helensburgh — and there have been quite a few — browsed through the shop at the end of the tour and enquired after ‘Charlotte from The Hill House’ at the till, my colleague behind the till tried hard to disguise her growing astonishment.

One day, when she couldn’t contain this any longer, she asked ‘what exactly did Charlotte do at the quarry?’ . . . the answer to which was a completely puzzled expression on the face of the enquirer.

The mystery was eventually resolved and ended in great hilarity and laughter. The only ‘Hill House’ my new colleague knew of was a quarry so-named not very far from Dumfries House.

I am glad to say that working for the National Trust for Scotland at one of their flagship properties, The Hill House in Helensburgh, has been far from anything you would be asked to do in a quarry!

The role of property manager at The Hill House working for the National Trust for Scotland is one of those unique jobs which can feel like living a dream.

Unlike most other work places, I lived on site, quite literally a stone’s throw away from the office, in the small gardener’s cottage, visible from the main street and aligned with the boundary wall of the garden.

Mackintosh’s ambitious original plans for this cottage had never been fully realised, but the property was extended in 1928 by the local architect Robert Wemyss to comprise two bedrooms, a kitchen, a living room, a bathroom a 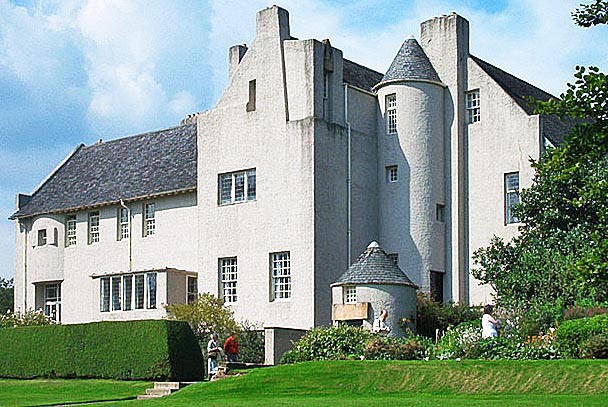 nd a huge garage – my home for the last six years.

I think it is true to say that I have thoroughly enjoyed this position, both, on a professional and a personal level.

The six years in Helensburgh have been an immensely rich and rewarding time in my life, with Charles Rennie Mackintosh, naturally, often taking centre stage.

It is a privilege to have been able to get to know a building to such a degree as I have been able to, in particular when this building is an internationally acknowledged architectural masterpiece and receives expressions of appreciation, even love at times, from a wide range of people from all over the globe.

I have been able to see The Hill House practically at every time of day, in every mood,  light and season. It has never become a place which I felt did not touch me any longer, quite the contrary.

Up until the last few weeks of my tenancy there, I could see new things, new aspects of Mackintosh’s design which would add to my understanding of the complexities of this house.

On the other hand, there were the family connections, both the Blackies and the Lawsons, which, for me, represented the vital spark and, in many ways, the key to the soul of this astonishing home.

Like most domestic projects, the starting point for the design of The Hill House were the very specific ideas of an individual who was looking for a congenial architect to give shape to their vision.

The match could not have been more perfect: the dialogue between the client Walter Blackie and Charles Rennie Mackintosh — which, to an not inconsiderable degree also extended to their respective wives — was constructive, inspirational and dynamic.

Fondly remembering the evolution of his house in his memoirs in 1943, Walter Blackie testified to Mackintosh’s attention to detail, both of a practical and aesthetic nature, and their long-lasting relationship which extended far beyond the completion of The Hill House.

It is in these notes that the house, for me, becomes completely real. Although drawing on the highest level of artistic invention and aesthetic sensitivity, Mackintosh did not produce a flight of fancy. Instead, he created a home which answered to the very practical requirements of very real people.

His imagination drew inspiration from, and took seriously, those who were going to live there and resulted in a work of architecture that is expressive of the deep consideration which has been given to the human need for comfort, practicality and beauty.

The Hill House is a wonderful jewel in Helensburgh’s crown, supported by enthusiastic and committed staff and volunteers.  It has also been heartening to see how the community in Helensburgh relates to it with a sense of ownership and pride.

The springfest for example, Christmas and the lively programme of exhibitions and event at The Hill House have been catalysts for local involvement and will continue to be so.

I have always felt that, unless the house is adopted by the local people, it would live in a kind of vacuum which will not do justice to its down-to-earth domestic dimension.

The visitor profile at the Hill House has become increasingly broad and varied over recent years. It ranged from people for whom a visit formed the climactic experience on their Mackintosh pilgrimage, to those who just loved ‘Rennie’ Mackintosh and left resolved to redecorate their homes ‘in the style of . . .’.

Others, not really tuned into the pinks and purples, would usually find themselves surprisingly engaged. Together with The Hill House staff and volunteers I have, on many occasions, witnessed ‘conversions’ from the sceptic to, if not the awe-inspired, at least the appreciator.

The house has a remarkable power. Whether it is to people’s taste or not, they usually feel moved by its magical atmosphere, or as a volunteer working at The Hill House once put it, ‘spiritually realigned’.

Saying goodbye was very emotional and I find myself going through waves of digesting my departure — the Hill House and its staff appear in my dreams!).

In art historical terms, my new position at Dumfries House has propelled me back into the 18th century and the collections I am now dealing with are on a very different scale in terms of the diversity and quantity.

Although no longer in charge of the whole operation, my remit, which combines visitor services, collection care and the development of interpretation and presentation of the house, is at least as big.

It is delightful to be surrounded by these well-crafted pieces of 18th century furniture and to have a job which largely revolves around developing an understanding of the building, its contents and its various occupants, and finding ways of interpreting and communicating these to a broad range of visitors.

I enjoy working with a dedicated team of seasonal guides and volunteers over and above the small team representing the Great Steward of Scotland’s Dumfries House Trust — a bit of a mouthful when you answer the phone.

We are very much at the beginning of a longer journey and I feel very grateful and privileged to be able to make a contribution toward the developments at this early stage.

If there is one flaw, it is only noteworthy for its entertaining dimension, and that is that my commute to work has increased considerably.

The walk from the gardener’s cottage to The Hill House used to take about half a minute. It now takes me a total of four minutes to manage the way from our house to Dumfries House.

I suppose, the longer travel time simply accounts for the larger distances on a country estate and not for the more relaxed gait of someone who is no longer in sole charge!

■ The Hill House, built in 1902-03 to designs by Mackintosh (1868 – 1928), is an internationally recognised masterpiece of domestic architecture, which is run by the National Trust for Scotland. It combines traditional Scottish architecture with a boldly inventive approach resulting in a very modern looking building.

Thanks to the decisive last minute intervention by Prince Charles, who led a consortium of Trusts, the house, its contents and the estate were saved for the nation in July 2007. It is now run by the Great Steward of Scotland’s Dumfries House Trust, which prepared the house for its public opening on June 6 this year.

The Hill House at 8 Upper Colquhoun Street is open daily from April 1 to October 31, between 1.30 and 5.30 pm. Dumfries House is open from Thursday to Monday between 10 and 5 for guided tours only. Tickets include transfer by minibus and refreshments, and there is a dedicated booking line on 01290-551111.