This article, the product of an interview with Hilda Whitelaw Purvis, was written by Helensburgh journalist Fiona Howard for inclusion in a special Civic Week supplement in the Helensburgh Advertiser on May 9 1975 to mark the passing of the Town Council in the reform of local government in Scotland.

HELENSBURGH at the start of the 20th century was an elegant place where life was simple and leisurely.

It was a mecca for artists, a retreat for Glasgow merchants, and a haven for folk looking for peace.

When the 19th century became the 20th, Helensburgh woman Mrs Hilda Whitelaw Purvis was just five years-old. Born in The Grange, Suffolk Street, the daughter of James Whitelaw Hamilton, artist and member of the famous Glasgow Boys, Mrs Purvis grew up at a time when the whole world was growing up, and she has seen many changes in her native town.

However Mrs Purvis, now living at Dunbeg, James Street, still remembers vividly life before the internal combustion engine caught on, and she firmly believes that Helensburgh then was a far better place than Helensburgh in 1975.

Life in those halcyon days, she said, was very pleasant, very leisurely and rather social. She added: “I much prefer the old Helensburgh. It has been ruined now. After all there is no countryside left really for walking in.”

When she was a child there was no Colgrain, only one or two houses above the West Highland Railway line and, to the west, nothing beyond the playing fields at Ardencaple. Woodend Farm was completely isolated. 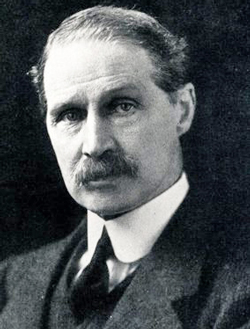 The streets were virtually devoid of traffic, and what little there was was horse-drawn . . . until Andrew Bonar Law (right), a Helensburgh man who later became Prime Minister, brought the first car into the town.

Bonar Law lived in Kintillo, Suffolk Street, and Mrs Purvis said: “I can well remember going for my first drive in a motor car. It was Bonar Law’s car, and we went to Whistlefield.

“It took about an hour to get there and the car wouldn’t go up the hill. I can remember being pretty frightened. It was an open car, and I was certainly a child then, so it must have been in the early 1900s.”

Bonar Law was not the only great personality which Helensburgh nursed. John Logie Baird, the inventor of television, was born and brought up in the burgh. He lived in West Argyle Street, and went to Larchfield School with Mrs Purvis’s brother.

“I knew John Logie Baird very well indeed,” she said. “He was very shy and retiring, and rather delicate. His father was the minister at St Bride’s Church, which was my parents’ church, so we were all friends.

“He and Jack Buchanan, later to become the musical comedy star, rigged up a sort of telephone system across Argyle Street. There is a story that the wire used to knock cab drivers’ hats off but I am not sure about the truth of that. It is certainly very possible.”

Another notable personality was A.N.Paterson, the architect who designed the war memorial in Hermitage Park and also parts of the Municipal Buildings. “He also designed Clyde Street School, and he lived in the Long Croft — which he also designed — in Rossdhu Drive,” Mrs Purvis said.

Mr Paterson’s war memorial was based in the stone floor of the stables of the now demolished Hermitage House in Hermitage Park, which during the First World War became a convalescent hospital for wounded soldiers. 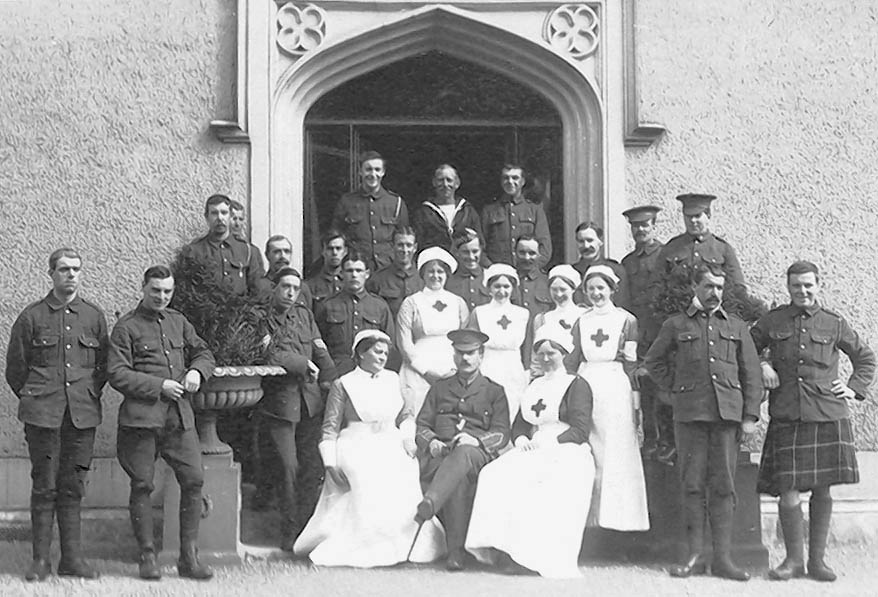 “I worked at the Hermitage Hospital,” said Mrs Purvis. “I did mostly cooking, and that was where I learnt to cook.

“A hut placed in the grounds in the war years was put to good use. It was used as a crèche for working wives to leave their children, a bit like a child welfare unit.

“It was run like a day nursery and I believe was very advanced and a great boon for the mothers.

“I used to go there to help, and weighed the babies and poured tea for the mothers. I am still giving some of these mothers tea in my work with the old people’s welfare committee! We have quite a laugh about it.”

Entertainment in Helensburgh was derived from tennis at Helensburgh Tennis Club, tea parties, the many dances in the Victoria Hall, and music.

“There were an awful lot of dances here, mostly in the Victoria Hall,” she said. “There was a series of club dances every winter and there were lots of big charity balls in those days, which were very often fancy dress and were great fun.”

It was at one of those charity balls that Mrs Purvis met the man she was to marry. She was wearing a beautiful pink dress which belonged to her grandmother — and the artist Sir William Russell Flint, another of the Glasgow Boys, painted a water colour of her wearing it. The painting still hangs above her fireplace.

The main charity ball every year was usually run by the Board of Management for the Victoria Infirmary, and the tickets cost between 10 and 12 shillings.

The musical entertainment which was not created at home was derived from a series of subscription concerts in the Victoria Hall run by a group of music enthusiasts.

“There were four a season,” Mrs Purvis said, “and we had all sorts of celebrities here. Once part of the Scottish Orchestra came. There was chamber music, classical music, pianists, violinists and singers.”

But Helensburgh at that time had its own great musical personality, Edgar Barret, who lived in Millig Street and taught music. He taught Mrs Purvis to play the piano, was the organist at St Bride’s Church, and later taught at St Bride’s School.

The most popular piece of music he wrote was the Coronach, a piece generally played at funerals. “That was more or less evolved in our house,” said Mrs Purvis. “He would come to us between church services and just play away. The piece seems to have been virtually lost now, but it was really beautiful.”

Other entertainments were the dramatic society, swimming at Shandon Hydro, and of course steamer trips.

“One great thing was going for sails on the steamers,” she said. “One very lovely sail was up the Gareloch on a sunny afternoon and a nice little pastime it was. It was very cheap and very pleasant.

As well as making the most of her leisure time, Mrs Purvis very much enjoyed her schooldays as a pupil at the Girls School Company school, St Bride’s (right).

She said: “Originally St Bride’s was in Kinnear House for a few years and then it moved to the present building. The various houses used for boarding were bought gradually. The uniform was blue and red at the beginning, but it was later changed to green.”

Mrs Purvis began school just after the present building in Stafford Street came into use.

“I was at the first prizegiving in that building,” she recalled. “The headmistress then was Miss Renton, who was very strict and demanded high standards in everything.”

She was so impressed with the school that her own daughter went there, and her grandchildren too. Her mother also went to a Girls School Company school, Park in Glasgow.

Mrs Purvis went to India to be married and spent many years there. She returned to the burgh when her husband Murray, who was in the Indian Medical Service, retired and came home to practice in Helensburgh.

“The town had altered a tremendous amount by then,” she said. “It had completely changed, and has never been the same again.”