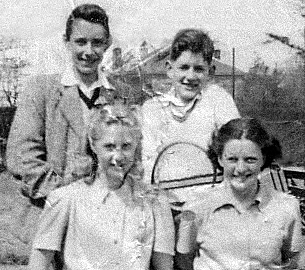 IN EARLY 1946, shortly before my tenth birthday and through no effort on my part, I became one of the first junior members of Helensburgh’s Craighelen Tennis Club.

When my father announced my membership he said that it was a prestigious club and, while I was not sure what he thought that meant, I was pretty certain that the club members would be snobs. It turned out that there were a few, but very few.

Given that I had never played tennis, my membership came as a complete surprise, especially since I was very active and thoroughly enjoyed the sports that I did play; football and grass hockey in the winter months and cricket in the summer.

I even had hopes that some day I would play for the school teams, and while I did make the football team and the unsanctioned hockey team, a place on the cricket team eluded me, except for a one month period in 1951 when I became the team’s twelfth man, in my case a seldom used substitute.

Ironically, I was certain that I could have made the starting eleven if I had been willing to give up Saturday tennis matches.

Although the club was essentially a mystery to me, I knew, or thought I knew, that it was a haunt for the socially elite and about the only social establishment in our upper-class bedroom town that had a parking area.

Being just after the war private cars were not common in Scotland, but that fact was lost on many ofthe members.

In March 1952 I, reluctantly, with my family, emigrated to Canada but for the five years that I was a member it was never made clear to me why the club changed years of tradition and enrolled junior members.

I did however accept the suggestion that the decision had been made in The Station Bar, my grandfather’s pub, where my father met with the then president of club.

While the source was probably not reliable, the word was that they were not entirely sober. Reasons aside I was indeed a member, as was another chap, a good friend and next-door neighbour.

On the first day of the season we arrived at the clubhouse bright and early and we were greeted coolly but cordially by the club secretary who introduced us to two other juniors.

That was confusing since I had not been told that there were others or that they were girls; an unexpected and initially unwelcome development.

The young ladies were day pupils at St Bride's, an exclusive local private school. One was tall, pretty, blond and a stranger, the other, shorter with dark hair, had however been known to me for most of my ten years.

By chance we had been born about the same time and our parents were acquainted. She had also attended Hermitage School before transferring to St Bride's. We did not really like each other.

That first morning we were, as directed, dressed correctly, totally in white; shorts, shirts, socks and shoes. My friend came equipped with a well-worn but serviceable tennis racket that belonged to his father, while I had a brand-new racket and wished that I simply had one like his.

We did not bring tennis balls having been told that the club would supply them.

Without consultation my mother had visited a Glasgow shop and bought me a racket, probably the only brand that came with a user’s manual; not one that could be ignored or read and set aside but one that was forever present.

Incredibly the racket was printed with messages and hints on how to play the game — the most ludicrous being the declarations on each side, just where the handle joined the face, statements that annoyed me for years until the racket was mercifully replaced.

It did not make the cut when I had to select a few personal items that were shipped ahead prior to our move to Vancouver. One side read Forehand Face and the other, logically, read Backhand Face.

I knew of no other player who had to be concerned that he or she might accidentally hit a ball with the wrong side of their racket, and I could not imagine what might be the penalty for misuse.

It did not get better, although the other instructions were less intrusive, could almost be ignored and some of them did in time wear off.

The upper side of the shaft bore several messages: Eyes on the Ball; Concentrate; Follow Through; Stand on the Balls of Your Feet; etc. I no longer recall the messages on the lower side since they did not intrude if I was careful to hit the ball with the designated face and did not become left-handed, an unlikely choice since in 1946 that was barely permitted and certainly never encouraged.

The final insults were on the leather-bound handle where dotted lines indicated the approved forehand and backhand grips, only of course for right-handed players.

The tennis club employed a grounds-keeper who grudgingly accepted the additional duties of coaching the newly minted members. Strangely, since he coached me for close to five years, I do not remember his name nor am I sure that I ever knew it.

We called him ‘Sir’ and as I recall the senior members called him ‘Dutchy’. While I was certain that he did not appreciate his new responsibilities, I did come to value his coaching talents.

Very early in our relationship he or the club executive decided that we should assist him with some of his duties, and we performed much of the labour that kept two red clay courts in playable condition. There were also three grass courts but we were rarely permitted to play on them.

Under Dutchy’s ever-watchful eye we swept the courts, raked the courts, rolled and watered the courts. In time, when he was convinced that we could walk in a straight line, we were permitted to apply fresh lines to the courts. I am not convinced that he just wanted us to lessen his workload; I suspect that initially he hoped, and perhaps prayed, that a regular dose of hard labour would cause us to simply go away.

Although I had no standard to judge him by, I believe that he was a good coach. He was never a friendly coach, seldom an encouraging or pleased coach, but technically he seemed to be a good coach. He turned me into a confident tennis player who by the time I was thirteen was at ease playing with and against the senior members, and I could beat many of them.

I do remember his somewhat warped view of the game, a view that I easily adopted. It was beaten into us at a time when we barely knew how to hold our rackets; except for me, I of course had my ever-present user’s manual.

His creed was: “You probably think that tennis is a game of hitting the ball forward and back. I am here to tell you it is not. When you hit the ball forward you do not want to see it again, you should pray that it never comes back.”

All my tennis-playing life I mentally recited his words as I stepped on to a court.

He had teaching techniques that were either designed to improve our game or, like the maintenance chores, make us wish that we were somewhere else. One simple ploy was to have us play one against three, with the one playing into the singles court while protecting the doubles court. We very quickly learned that we could not play tennis by standing still.

In another exercise he would hang a used tennis ball above our heads, just above the point where a ball should be tossed if we were to serve properly. We were required to toss balls endlessly until they just barely hit the hanging ball.

A third exercise started out as torture and became great fun. In the late 1940s, tennis balls were not packed in vacuum tins — they came six to a cardboard box. Our coach saved these boxes and used them to develop remarkably accurate and unintentionally powerful serves. 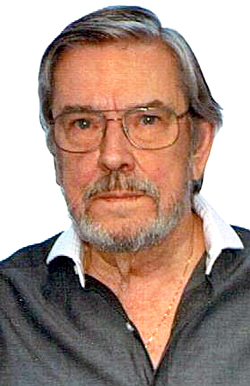 He would stand them on end inside the service courts and part way along both sides of the centre line and the inner tram lines. We had to serve balls until the boxes had been knocked over. He did not care how long it took, or for that matter how dark it became; often summer rain was our only saviour. Our accuracy came from learning to hit the boxes, and the power from trying to destroy them.

Strangely a game that I never thought of playing became a minor obsession. During the school term I played every good weekend and in summer it was not unusual for me to play seven days a week. In the winter I played indoors, as often as possible, at Shandon Hydro.

Interestingly one could always tell those who played at the Hydro. The hotel dusted the concrete playing surface with a green powder that adhered to white shoes.

A final note: during the time of my membership the club sat adjacent to a nursery of some kind, and the glass greenhouses and our tennis balls did not get along.

My recollection is that the owner would not let us retrieve errant balls even if they had not broken anything, nor would he toss them back. He did however turn up at the clubhouse on a somewhat regular basis with a bushel basket full of balls. I assume that there was a compensation negotiation with the club executive.

In April 2013 I dropped into the club. Although I had driven past on my many visits to Helensburgh, that was the first time in 61 years that I had gone in. The five courts are still in place, no longer clay and grass but some composite surface. There were lights for evening play.

The property appeared to be the same size but the small 1946 clubhouse had grown to take up almost all available space and had added a second floor. Mercifully the nursery is gone, but the flats that have replaced it must still be receiving the errant tennis balls.

Iain G.Campbell was born in Helensburgh in April 1936 and from age two lived in Ardencaple Quadrant. He attended Hermitage School until his family emigrated to Vancouver, Canada, in 1952. There he spent his working life in manufacturing and logistics management with three multinational companies.

He married twice and has three children from his first marriage. His hobbies include traveling — he has visited 40 countries — cooking and writing. He retired twenty years ago and lives less than a mile from the United States border in the Vancouver suburb of South Surrey. His paternal grandfather owned The Station Bar on Princes Street until his retirement in 1951.