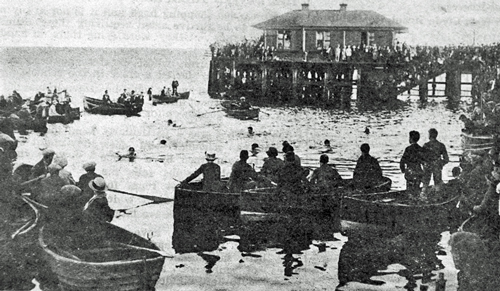 OLD photographs of Helensburgh Swimming Pool bring the memories flooding back of swimming before and after the arrival of the outdoor pool.

I recall how central a part the pool and club played in the lives of many local children.

The summer holidays meant a season ticket for the pool and the aim was to spend every waking minute there, come rain and shine.

In fact, we argued that the water was warmer when it rained. This was true devotion in an open air pool.

The chute at the shallow end was the first great daredevil hurdle to conquer in order to qualify to be allowed 'up the deep end' and sample the delights of the springboard, then to the diving dale — the ultimate goal of every wanna-be competitor for the galas.

There was a play area and sunbathing areas, something for everyone, including a place tor youngsters to meet. Vandalism was a poor second to the fun of the pool.

Swimming was always popular in the town. I had heard tales from my father that the Clyde at the end of the pier was the pool for him and his pals; of races from the old 'Empress’ and to Rosneath Point.

And of a one-legged swimmer and others who swam with lighted candles. I was sure he was pulling my leg until I found out years later the stories were true.

The ladies swam at Drumfork side at the side of the old pier there. Mixed bathing was not allowed!

The long-distance Championship of Scotland was held on Saturday August 17 1912.

The race was indeed from the old ship, 'the wall of wood’, to Helensburgh. Three members from the Helensburgh club entered, but the winner was William Kirkwood of Paisley in only 50 minutes.

At the second gala of the season on July 2 1914 ‘trick and ornamental swimming was performed by David Hutcheson, the one-legged swimmer from the Govan Y.M.C.A. Club.

Another attraction was the swimmers in night attire holding a lighted candle while attempting to swim a distance.

The club was closed for the duration of the First World War, but in 1919 Helensburgh returned to win the County Championship at the Dumbartonshire Clubs Gala at the Brock Baths in Dumbarton in fine style. The team was A.McCulloch, A.Thomson, W.Bryden and G.Lyall.

In 1920 the Model Yacht Club was, sadly, disbanded. The members gave the Aukland Medal to the club and it became the coveted award for the winner of the Junior Diving Competition.

In 1921 the captain of the club, A.McCulloch, brought honour to the club by being awarded a Royal Humane Certificate for bravery in rescuing a sailor who had fallen from the pier on July 12 1920.

By 1925 there was still no pool, but the Town Council at last gave the club permission to use the Waiting Room at the head of the pier and to bathe for one hour one night a week after the last steamer had left.

Shandon Hydro had a pool and the club would dearly have loved to have had winter swimming there, but the price was not right.

Club officials continued to fight for a swimming pool but in vain. The ladies section was still separate.

In 1927 the club continued to grow with a big increase in junior members, so much so that subscriptions were reduced from 3/6 to 2/6 for seniors and one shilling for juniors. 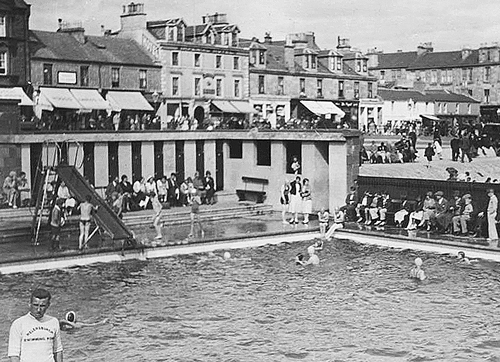 At last a generous businessman in the town, Provost Andrew Buchanan, gifted the open-air swimming pool in 1928.

At last in 1929 the male and female sections of the club were amalgamated and ladies joined the club, including two long-distance swimmers — Miss Betty Wilson (Mrs Trail) and Miss E.Warden (Mrs Mercer).

These two ladies became the role models for the aspiring swimmers and were to play a vital part in the success of the club for many years.

Winter did not deter the stalwarts of the Dumbartonshire clubs of yesteryear, who travelled to the Brock Baths in Dumbarton for training.

On December 19 1919 a gala was held in which six teams competed, with Helensburgh the worthy winner.

The pool opened on the first Saturday in May. On the previous Friday evening we stood outside the Burgh Chamberlain's Office waiting to buy our Season Ticket for the forthcoming season.

The cost was juniors five shillings, seniors 7/6, later 15 shillings. This ticket entitled us to all-day and early evening swimming or spectating. Galas and late night events were extra.

Monthly galas were held on a Saturday from May to September. These were important events, greatly supported by members and townspeople. Visiting teams brought their supporters and rivalry was intense. 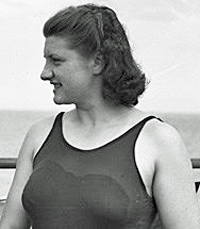 Many clubs had celebrities which was a great crowd puller. For example, the Wardrop twins who were international swimmers. Bobby Macgregor and his sister Betty and Nancy Riach (right) were favourites here.

Nancy was a very strong swimmer. She died of polio at only eighteen years-old, she was greatly mourned, and she was a very nice person to swim against.

Water polo was a very popular part of the programme. I remember many of the ‘stars' everyone loved to see. They were such fun and obviously enjoyed what was a very energetic performance.

Fancy dress swimming was another 'must', as was the graceful diving of the competitors.

If the weather held for seven consecutive days the Pool was opened from 10pm until midnight for floodlit swimming. This was a great occasion, and a magical one for youngsters. The combination of coloured fairy lights encircling the pool, the floodlights highlighting areas with darkness all arounrd was something to remernber.

On August 3 or 4 depending on the tide and wind, the Craigendoran to Helensburgh swim took place. Each swimmer was accompanied by a rowing boat whose three-man crew included a lifesaver. On reaching the finish Mrs Crockett was waiting, with the hot soup ready in the hut at the end of the pier.

October brought the excitement of one of the winter events of the year. The Swimming Club Party in the Pillar Hall of the Victoria Hall was a must. The highlight was the Prizegiving, the lucky winners receiving cups and/or book tokens.

It would not have been New Year’s Day without the Ne'erday Swim off the end of the pier, when it seemed as if the whole population turned out to cheer on the stalwarts, many of whom had turned out year after year to celebrate the nascent year, and meet their friends. The cry of ‘Happy New Year' was part of the occasion. 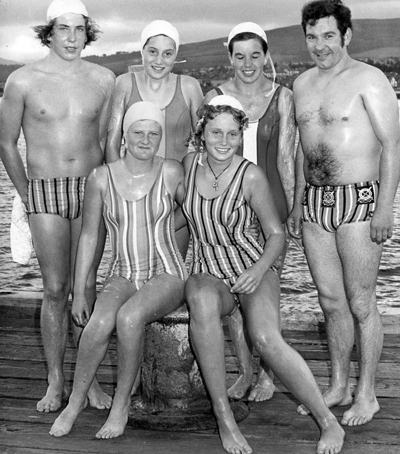 Willie Robertson designed the certificate and club badge. Stewart Rue added the words 'Many are Cauld but Few are Frozen' on the certificates. Wings were on the badges for blazers and swimming costumes. Angus Trail was club president.

Mr Rue, Senior, who was our neighbour, gave me swimming lessons on the kitchen table, when I was three years-old. This was followed by dry-land lessons on Friday evenings at the club, before being allowed into the water.

Mrs Mercer gave private lessons in the mornings. She used a belt suspended from a pole to help learners with their first lesson in the water.

Jimmy McDonagh and Wattie Marsland were the Club Handicappers.

These people and many more gave of their time to give the young people of Helensburgh something they enjoyed together and for which they are ever grateful. Nor do we forget the generosity of Bailie Buchanan who gifted the Pool to the town.