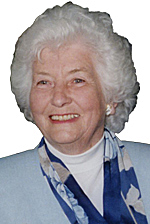 I DEARLY loved both my Grannies, although they had very different natures.

I once described them by saying that I had a cup of tea and a teabread with my Helensburgh granny and afternoon tea with my Kirkcudbrightshire one.

I visited my local Gran often. She was my friend to whom I poured out my grievances. Her solution to everything was to sit at the window in the sitting-room and discuss the problem.

A tiny table was set for our cup of tea and placed between two chairs.

While the kettle boiled I ran to Beauman’s the bakers for four teabread, one Paris bun, one raspberry turnover, a Chelsea bun and my choice of the day.

(The first time I was sent I insisted on taking a loaf, luckily granny saw the funny side of things and I ran back for our treat.)

It was usually just the two of us but occasionally Mr Leary, the Town Missionary, would call. I enjoyed those visits as I listened to the talk of the work he was involved in.

I had never seen a black baby but I loved the stories and the printed pamphlets that Mr Leary showed me. I was sad about the poor children but they were not so interesting to me. I saw them about the town.

I knew the little drawer where my Gran kept the coin collection, including some of it for the black babies, would soon be opened and I would be allowed to present him, very importantly, with her offering. I was very young at the time.

Mr John Leary lived locally at Richmond House, 33 William Street, but I seem to remember that he also had a flat at 39 Sinclair Street above Gibbs the grocer. Mr R.Leary lived at the Salvation Army Officers’ Quarters at 27 West Princes Street.

There were quite a few large Christian charities in the town then.

The band played around the town. I loved to watch the performances. I thought the ladies bonnets, tied with big bows were lovely, much nicer than my Sunday hat.

We had lots of music around. The Colquhoun Pipe Band and later the Jubilee Pipe Band practiced on the grass on the esplanade when the weather was clement. They also marched around the town which most people enjoyed. A group of children always appeared from nowhere to march behind the musicians.

We had Brass Band performances also, but I don’t know if the musicians were local.

The Band of Hope held their meeting across the road from the Salvation Army Hall in the Temperance Hall at 24 West Princes Street. There we were taught the dangers of drink and prompted to sign The Pledge. Considering the ages of the children, I doubt if it meant anything to them, it certainly did not to me, I did not know what all the fuss was about, and anyway we had heard it all before at Sunday School and had not had to sign anything.

A lot of children attended. We had games and entertainment. The children were encouraged to take part. For example, we had singers and some poetry readings. We were handed a bag with a bun and an orange in it. I don’t know why I was offended by this, but I was. I did not enjoy my visit so did not go back.

How simple our pleasures were then. I loved school where I met other children and afterwards looked forward to Children’s Hour on the radio. Later in the evening there were lots of board games that I pleaded with my sister’s friends to indulge in. Best of all there were books and comics so I was never lonely.

We swapped the comics when I was older. I enjoyed the Rover from boys who were our neighbours. They did not fancy The Girls’ Chrystal but luckily I had Film Fun to barter.

My first adventure with Granny was the day she took me to Rosneath Castle for a picnic and to see the huge trees, Adam and Eve, which were over a hundred years old.

It had been quite an occasion packing the food. I suppose it would be the usual sandwiches and fruit but it was nectar to me that day.

I still remember the feeling of self-importance as I marched down the pier, wearing my new summer frock and sandals, swinging my own picnic-bag.

Granny carried the wicker picnic basket which I thought was state of the art. It had a tiny heater with a little kettle which fitted on top. Tea never tasted so good. All that was needed for our picnic was in that basket.

I was very excited about our sail over the Gareloch to Rosneath in a motor-boat, that is until I saw the steps I would have to tackle to reach the vessel. The boat was berthed at the east side of the pier. I was used to boarding a steamer at the front and on the level with the Pier House and on a gangplank.

The steps were black and slippery-looking with green edges. To the right was a forest of sinister looking black piles of the pier with water splashing on to the steps. On the left were lots of rowing boats bucking like wild horses to be free.

We were in fact experiencing the wash of the steamer which had just left.

However, I was with Grannie and she would keep me safe.

I had the help of a seaman to jump on board, but what about Grannie with the basket and her long skirt and could she jump?

Of course, there was no problem, with the help of two seamen Grannie boarded with her usual grace and all was well with my world.

It was such a thrill to be sailing at such speed with all the sounds, sights and smells of the sea and boat.

There was a lot of the ruined Palace still to be seen. We sat on a crumbling wall and Granny spoke of the beautiful building before the fire destroyed it, also of the owners the Duke and Duchess of Argyll, the Royalty of the day. She remembered the visits of Queen Victoria to the Palace to visit her daughter the Princess Louise, the Duke’s wife.

The Queen’s yacht was moored in Campsail Bay which had been quite a sight for the enjoyment of the locals.

I was thrilled to think that we had Royalty living so near.

One of my greatest disappointments was when I was shown a picture of the princess. I never thought of an old lady being a princess.

Picnic over, now to visit the ancient trees.

I looked and looked but could not see the huge trees anywhere. Granny pointed to two white tree trunks with railings around them.

It was so difficult to keep the tears at bay. I was so disappointed but did not want to let Granny see that I just wanted to cry for the lovely trees I had envisaged, trees suitable for a princess to own.

However, she must have guessed, because there were many more stories to be told that day, of the Royals of her day, to keep the vivid imagination of her grand-daughter occupied.

It had been a magical day, the first with just the two of us.

I never heard my Gran complain or be impatient. She was always seemed so serene with a smile for everyone, in spite of her having great sadness in her life, as I learned much later.

Granny had four sons who were in the trenches in France at the same time. Two of them were seriously wounded.

I learned a lot from that lovely lady who was my Granny, who had time for a little girl with an insatiable appetite for stories.