TIME certainly flies when you are having fun . . . and for me the past half-century has been lots of fun.

It was on Monday August 31 1965 that I first arrived in the then Helensburgh Advertiser office at 17-19 East King Street to replace Tom Gallacher — later one of Scotland’s leading playwrights — as the reporter for owner and editor Craig M.Jeffrey.

Ever since then I have been involved with the Advertiser in one way or another, most recently in writing the Eye on Millig page. Five decades seem no time at all.

My apologies that this article is unashamedly personal and nostalgic, and I could never have envisaged that I would be writing it when I first went through the front door of what was then a hot metal print shop.

I am not sure how confident Craig was about appointing me, but I had been working for the previous 15 months for the much more traditional and longstanding Helensburgh and Gareloch Times, published by Macneur and Bryden Ltd. in East Princes Street.

I had met Tom every working day at the then Helensburgh Police Station in Sinclair Street for the daily question and answer session with the Bar Officer about the happenings of the previous 24 hours.

Tom had a gas meter reader’s folder which I much admired, and I had the traditional reporter’s notebook. We also met at meetings of the Town Council, Cove and Kilcreggan Town Council, the District Council, and the Helensburgh Education Sub-Committee.

We became good friends, and I assume it was at Tom’s recommendation that I was appointed to the much livelier Advertiser, a move which I viewed as likely to broaden my experience. It did.

I must have done something right, as in ten days I was given my first pay rise — excellent psychology when employing a young lad.

That could have been something to do with my first day, when I was called to Rosneath where four men working in a 20ft deep trench laying pipes were trapped when part of the banking gave way.

The operator of a mechanical digger and a colleague rushed to help free the men as sand poured down on them. One of the pipelayers and one of the helpers were encased up to their thighs —but the other man disappeared completely.

A protracted and successful rescue operation followed, and I interviewed rescuers and passers-by. Fortunately none of the trapped men were seriously injured.

Other stories I worked on that first week included a solicitor smashing a sports car into a Loch Lomondside rock face. It rebounded across the road and through a wall, then nosedived eight feet down into the loch. The driver and his wife stepped out unhurt into two feet of water.

Rhu Amateurs football team were on their way to play Mosspark when the Dormobile they were travelling in was involved in a three vehicle pile-up at Dumbuck. The match was cancelled, and the players went to watch Dumbarton play Alloa at the historic Boghead ground.

From Dumbarton Sheriff Court came the story of a drunk 22 year-old Helensburgh man who broke into a burgh house, was confronted by the lady of the house, and told her “Don’t worry, I won’t hurt you.”

At this moment the lady’s Alsatian dog bounded down the stairs, looked at the man — and sat down.

All ended well, however, when the lady locked her unwelcome visitor in the toilet and called the police. The man escaped through the window, but was caught and in due course jailed for three months.

That same week but on different days four ‘bombs’ were washed up on the shore between Craigendoran and Cardross. A Royal Navy Bomb and Mine Disposal Unit exploded one of them near the village.

The other three turned out to be 3ft long used smoke generators, and they were taken away. Only Craig Jeffrey could write the headline “3 Phuts and One Bang!” 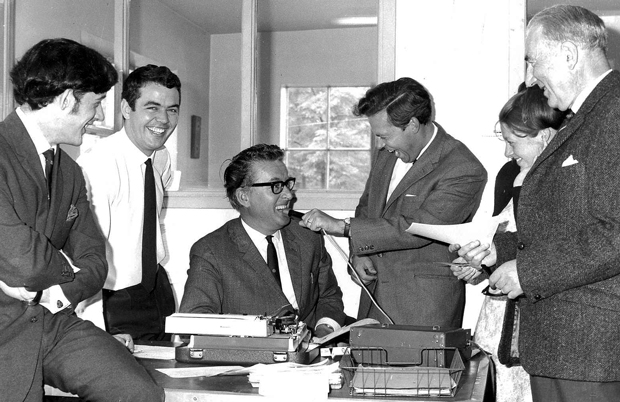 Not every week produced such interesting stories as these ones, but the Advertiser had a reputation in the industry as a ‘newsy’ paper and it offered invaluable experience for whatever direction my career might take.

In the event, and after watching national newspaper reporters at work on stories which often did not reach print, I decided that weekly papers were for me as almost everything written would be published.

A previous Advertiser reporter went on to be features editor of the Scottish Sunday Express, and when he left he had a double wardrobe full of unpublished articles.

Working on a local paper meant — in those days at least — that you got to know prominent members of the local community in all fields, and built up relationships based on honesty and trust.

I marvel how today’s Advertiser reporting staff, based as they are in Clydebank, can establish such local relationships. But they do, and they are doing a very good job in covering the town and district’s news and sport.

A career which had begun as a part-time junior reporter on the Helensburgh and Gareloch Times led on to the editorship of the Advertiser and later the Dumbarton and Vale of Leven Reporter. I ended up as editorial director of fourteen weekly newspapers circulating in Dunbartonshire, Renfrewshire and Ayrshire.

Journalism remains a great career which introduces young reporters to the rich, the famous and the brave, not to mention the odd crook, charlatan and imposter.

The pay may not be great, but the experience is fantastic.

Most important of all is to build up trust and remember that the millionaire and the road sweeper both pay the same 85p for their Advertiser — and should be accorded equal access and respect.

‘Here’s to the next 50 years’ might be pushing it a little, but my keyboard will still be occupied on Eye on Millig and editing several websites for a while longer, please!

The top picture shows local press representatives on a visit to the then Clyde Submarine Base at Faslane, including Terry Duncan, Bill Heaney, Angela Sandeman, Commodore Peter LaNiece, Gerry Fitzgerald, and on the right a youthful Donald Fullarton.