The General visited Helensburgh to speak at a meeting in the Victoria Hall, and local historian and Helensburgh Heritage Trust director Alistair McIntyre unearthed a report of the event in the Helensburgh and Gareloch Times of November 2 1910.

Alistair said: “The pictures provide a reminder of General Booth’s visit to the town, which took place over Tuesday and Wednesday 26th and 27th October 1910. He arrived by train, being welcomed at Helensburgh Central Station by a delegation which included David S.Maclachlan, Provost of Helensburgh.”

Mr Maclachlan, who ran a bakery and restaurant business which existed in the town for many years and was later run by his descendants, was Provost from 1908-11.

The bowler-hatted gentleman who appears in both pictures is the Lord Lieutenant of Dunbartonshire, Lord Inverclyde.

The highlight of the visit was the address by General Booth, which took place at the Victoria Halls later on the first day.

Lord Inverclyde chaired the meeting, in the company of Lady Inverclyde, and along with the Provost and his wife, invited guests included the Sheriff of the County, County, Town and Parish Councillors, Justices of the Peace, members of the School Board, and members of the Clergy. 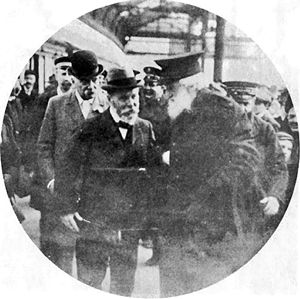 “The Halls were packed with members of the public, and hundreds had to be turned away,” Alastair said. “The General, who was 81 at the time and died two years later, spoke about the work of the Salvation Army which he had founded, along with his wife, some 45 years earlier.

“Following his address, which lasted for one and a half hours, a vote of thanks was proposed by Sheriff Blair. The General stayed overnight in the town as the guest of Mr and Mrs William Kidston at their seafront mansion, Ferniegair.”

General Booth left the next morning by boat from Helensburgh pier and crossed to Port Glasgow, so the picture at the pier was actually his departure, with the one station taken on his arrival.

The General visited Armadale in West Lothian in 1902, and gave lectures in Helensburgh and Aberdeen in 1910, so was in Scotland at least twice.

Ex-Provost Billy Petrie and his late wife Jean had a long association with the Salvation Army, as indeed has Helensburgh, as there used to be Army premises in East King Street near the Baptist Church and the town was something of a stronghold for them.

Some 33 years ago they took a plaque from Colonel Dennis Hunter, the territorial commander in Scotland, and presented it to the Santa Anna members in California.

“It was at the time of the Salvation Army centenary,” the ex-Provost recalled, “and the plaque from Colonel Hunter was warmly received by the corps in Santa Anna which had several members who had emigrated from the Glasgow area.”