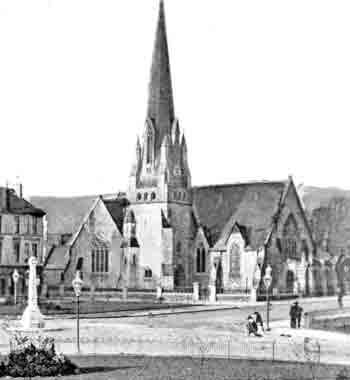 In the September edition of the church magazine Ruach, former Session Clerk Sandy Kerr — a director of Helensburgh Heritage Trust — reminisced about the 1981 union.

He wrote: My abiding memory of the Union of Old and St Andrew’s with St. Bride’s church is that of the “Whigmaleeries” — the celebratory concert that took place on January 28 1982 having been postponed from November 20/21 of the previous year.

Every organisation was challenged to produce an item for the programme so there was a wide spread of entertainment on offer.

The evening was great fun and it was good to hear so much innocent laughter and enjoyment. Amongst the many acts, I recall the Kirk Session, dressed in Pacific holiday gear, singing a calypso and the youngsters from the Bible Class imitating the newsdesk in ‘The Two Ronnies’. Donald Asher was the indomitable compère and his great sense of humour provided the linkage between acts.

However the undoubted highlight of the show was provided by the Minister, the Rev. David Reid, and his wife Isobel. They had composed a song about the marriage of Auld Andrew (Old and St Andrew’s) and his bride (St Bride’s), sung to the Flanders and Swann tune ‘The Honeysuckle and the Bindweed’.

They sang and acted with great gusto and the song had the audience convulsed with laughter throughout . . .

We sing you a love song, but that isn’t new

For singing of love is what most singers do,

But this time it’s different, I’m sure you’ll agree,

For we sing the love story of you and of me.

We won’t be too bashful; we’ll tell you it all

For this lovely story is bound to enthral:

It all happened here by the banks of the Clyde

And she is my Bride.

But July and August we smiled and held hands.

Our romance has blossomed and now we are here

Both handsome Old Andrew and you Bride, my dear.

We’re distant relations (or so they declare) –

We both trace descent from the Church in the Square.

I’m sure that is true, for I just fill with pride

When I look at Old Andrew and I look at my Bride.

And now we are married! A Union proclaimed!

And so from that moment our family is named

The West Kirk – which shows that a knot has been tied

Between you dear, Old Andrew And you dear, my Bride.

I guess most of us lived through the actual union oblivious to the work going on in the background. It was a union being sought by one church with another, so we were spared most of the prickliness that can arise when unions are being forced.

However, there was a key element in the approach taken that is well worth remembering. David Reid insisted that the people involved in all aspects of church life meet with their opposite numbers to discuss how things might operate after the union.

All of this took place before the final decision to unite was taken and, whilst there were differences of approach, agreement was reached and this greatly eased the eventual decision-making.

With hindsight, this was a very smooth transition from two congregations to one. Without doubt that is due to the fact that all relevant parties were consulted and key people from both congregations were enabled to play a continuing role in the life of the new congregation.

The actual service of union took place on Wednesday September 9 1981 and was conducted by Rev. Andrew Mitchell, then Presbytery Clerk. It was largely formal and involved the induction of David Reid as first minister of the new Charge, and he was given the right hand of fellowship by a large contingent from presbytery.

At the ensuing service, the first of the West Kirk, this hand of fellowship was passed on by the minister sha king hands with a group of children, who then gave the hand of fellowship to the whole congregation. It was a moving gesture which I have long remembered.