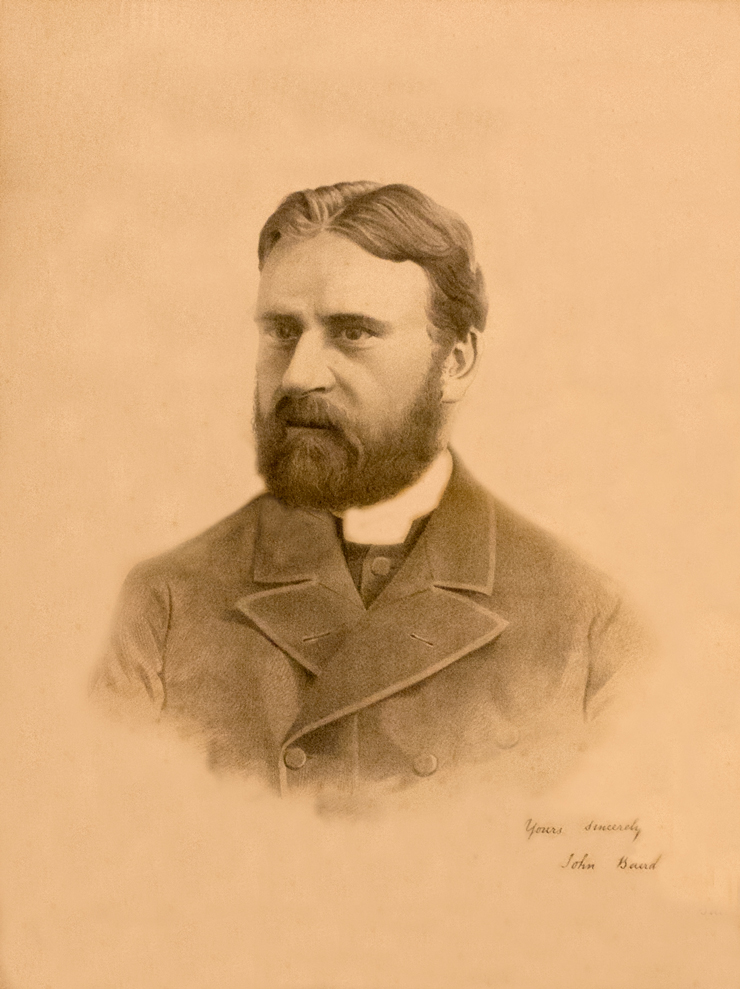 THE NINE decades of the life of the Rev John Baird — father of TV inventor John Logie Baird — encompassed much of Helensburgh’s early religious history.

A signed engraving which is part of Argyll and Bute Council’s Libraries Collection shows a fine looking man of great character, which helps to explain his considerable following over many years.

Sadly the engraving has deteriorated markedly, but the wonders of Photoshop allowed restoration of an image to show how it originally looked (right).

When he died in 1932 at the age of 90 the Helensburgh and Gareloch Times reported: “Mr Baird was a notable link with the early ecclesiastical life of Helensburgh.”

A fascinating obituary told the story of his life and the formation of the West Established Church, later, St Bride’s Church, which closed for worship in 1981 and was demolished in 1990.

In 1867 it was felt that there was a need for an increased supply of divine ordinances for strangers coming to Helensburgh in the summer months. To meet this demand a wooden hut was erected in William Street and fitted out as a preaching station.

From four candidates Mr Baird, who had just graduated Bachelor of Divinity, was selected to conduct the services.

He proved so popular in his first year that increasing attendances required more accommodation — so an Iron Church was erected on a piece of ground facing William Street and formally opened that year.

Mr Baird was ordained to this church by the Presbytery of Dumbarton.

The obituary stated: “About this time, the subject of instrumental music being ventilated among the congregation, an agitation in favour of a harmonium was successfully carried out, although the scheme met with some opposition alike from the congregation and the Presbytery.”

However in 1875 it was felt that there should be a stone church, and the managers secured the land on which St Bride’s was to stand.

The new building cost around £7,000, and was opened for public worship on March 10 1878, soon afterwards being given the status of a parish church. The iron church became a Boy Scout Hall and was used for many years.

Farmer’s son the Rev John Baird, MA, BD, was born in Glasgow in 1842 and studied at Glasgow University from 1860, where he gained an MA in 1862, followed by BD five years later.

He earned many class distinctions and gained the highest testimonials from the professors under whom he studied.

“He preached many a sermon of profound and original thinking and oftimes of earnest and very eloquent expression,” the obituary stated.

“He drew around him many men of experience, culture and education.

“We have heard him describe his early days in Helensburgh as the ‘Wooden Age’, which was followed by the ‘Iron Age’ and then the ‘Stone Period’.

“Mr Baird’s duties in the early part of his career particularly must have been very arduous.

“To maintain a reputation, early established of originality in preaching; to face the responsibilities brought about by a much enlarged and increasing congregation, harassed as he must have been with the many distractions which a new church with a big burden of debt brings with it.

“After a period of six years, however, he had the satisfaction of being in the happy position of possessing a handsome church free of debt and a generous and devoted congregation.”

He married a wealthy shipbuilder’s daughter, Jessie Inglis, who, the writer said, was held in much esteem by the entire congregation. She possessed an amiability of disposition and grace of manner which endeared her to everyone.

She was devoted to the church and laboured constantly for it until her death.

Mr Baird was much esteemed by his brother clergymen in the town and district, with whom it is said he worked most harmoniously.

For several years he acted as chaplain to the local Artillery Corps, who at stated periods attended divine service in his church.

Over a lengthy period Mr Baird took a very practical interest in the various religious and philanthropic organisations in the town.

He was blessed with a remarkable fund of humour and possessed an apparently endless repertoire of good stories.

“He could have compiled a wonderful volume of reminiscences if he had cared,” the obituary writer suggested.

For over thirty years no important function in the town was complete without the presence of Mr Baird.

The paper stated: “We remember him when the Church of Scotland Lectures flourished in our midst, and how popular he was as a chairman or as a proposer of a vote of thanks.

“None could excel him for pawky, original humour, combined with a certain solemnity of manner which never failed to ‘bring the house down’ with a fusillade of laughter.”

After 42 years of service to his beloved congregation his health began to suffer and he requested that a colleague and successor be appointed.

The Rev W.J.S.Miller BD was appointed and took over his duties in June 1909, and Mr Baird retired from the ministry nine years later.

The obituary added: “In the eventide of his days Mr Baird took an intelligent interest in the progress of his church and in the town, and was often to be seen enjoying a stroll on the esplanade.”

He died on September 14 1932 at his West Argyle Street home, The Lodge, and was survived by two sons and two daughters.

The obituary noted that his younger son John was the distinguished inventor of television, and his elder daughter Annie rendered splendid services as a nurse in the Great War and devoted herself to her father in his declining years.

The funeral took place to Helensburgh Cemetery and was attended by a large number of mourners, representative of every section of the community in which the deceased was loved and respected. 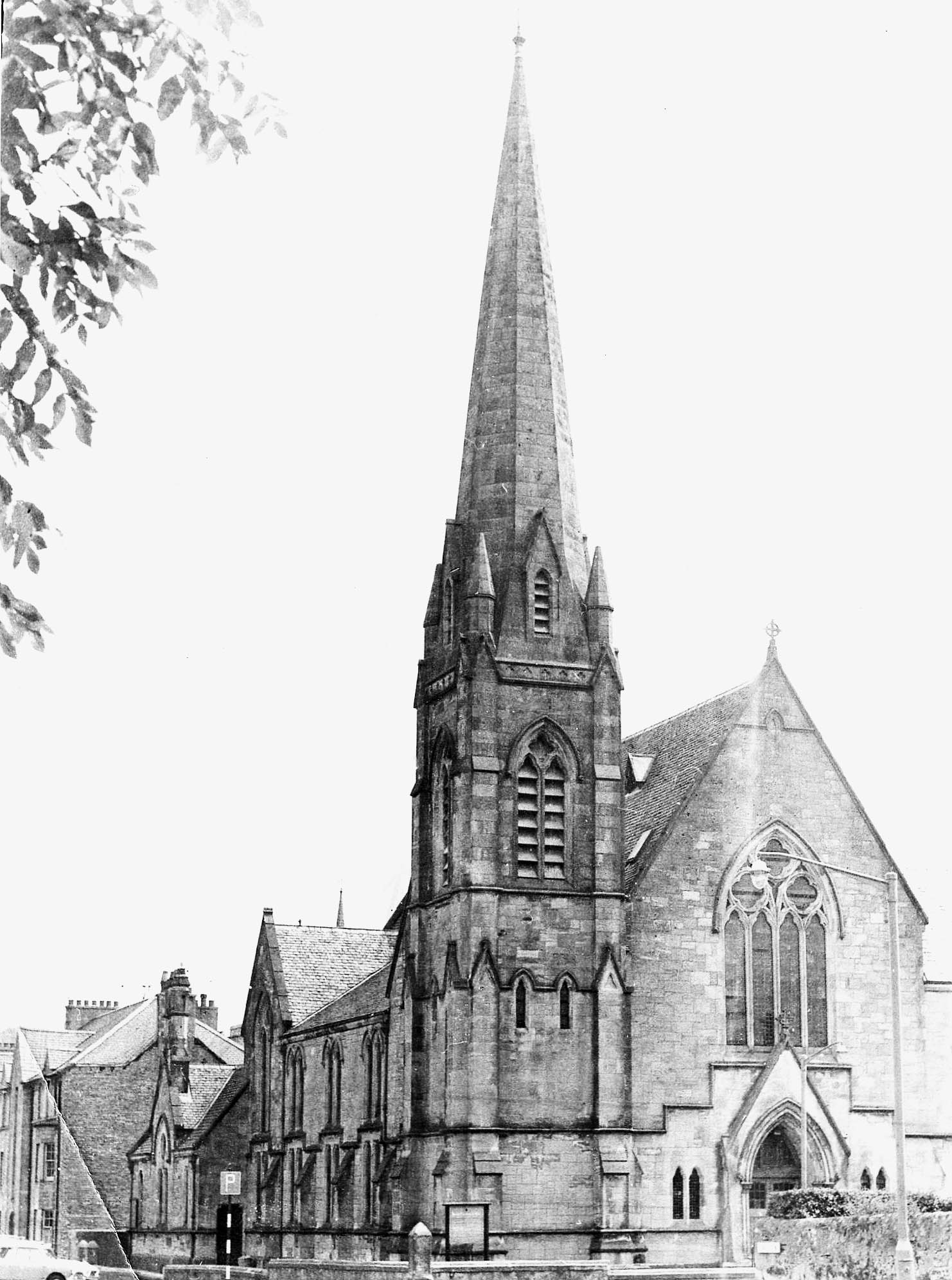 A service was held in the Church of St Bride (left) immediately before the funeral. Nearly all the ministers in Helensburgh were present at the service and at the funeral.

The obituary ended: “The remains of the fine old minister were laid to rest in Helensburgh Cemetery. The principal mourners were Mr John L.Baird and his sisters, and Messrs Snodgrass, Reid, Allan, Inglis and Gibson.”

A memorial window was erected in St Bride's Church, and when the church was demolished it was saved by Helensburgh Heritage Trust. It can now be seen mounted on the wall of Helensburgh Library on West King Street.

He was brought up at his father’s farm, Sunny Brae, in the Camelon area just outside Falkirk. The single storey stone farm building still survives.

Among his many activities in the town he formed a Literary Society, of which the future Prime Minister, Andrew Bonar Law, was once a member.

He wrote a 126-page book of religious commentary which was published in 1926, entitled ‘The spiritual unfolding of Bishop H.C.G.Moule, D.D.’ and described as ‘an exposition by John Baird’.

It was published in 1926 by Oliphants of London and Edinburgh, and is in the copyright libraries at the National Library of Scotland and Cambridge University.The author was aged 84.

The two men actually met in 1888 when Moule, Principal of Ridley Hall, Cambridge, and later Bishop of Durham Moule, visited a country house in Scotland, and a Bible reading was arranged to which all the neighbourhood clergy were invited.