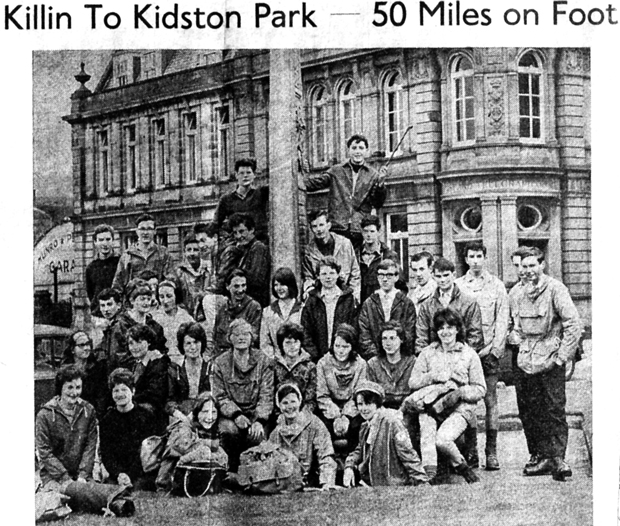 FIFTY years ago in May 1964, the then Helensburgh Youth Council organised a fifty mile walk, and this year, May 2014, the golden jubilee was celebrated — with a shorter walk.

The original event was held as part of and in aid of Christian Aid Week, and was from Killin, a village at the western head of Loch Tay which was then in Perthshire and is now in the local authority area of Stirling.

The fifty mile walk was in response to a challenge set by President John Kennedy, which the American public took as a personal request from their leader. The President’s brother Robert actually did the walk in leather shoes, partly through slush and snow.

The target was to complete it in 20 hours or less, and in the first thirty days of the challenge bronze medals were presented to any completing it in less than 12 hours.

It did not take long for the challenge to spread to Europe, especially Britain and Holland. The biggest was in the inappropriately-named southern Dutch city of Sittard, where 7,090 took part in 1989.

So at 8am on a May Saturday half a dozen cars set off from Colquhoun Square, taking the 35 entrants to Killin for a 10.15am start. Two cars followed the walkers, carrying their gear, food, fruit and drink. For the first 30 miles there were checkpoints every 10-13 miles, then every 5-6 miles.

The walkers, sweltering on a scorching day, would stop, rest, eat and drink. The plan was to stick together the whole way back to the burgh. They achieved this as far as Ardlui on Loch Lomondside, but then they began to string out. Those who dropped out were driven home by car.

Others stopped for a rest and then began again. One or two accepted lifts for some of the way, while some of the stronger walkers held back to help those who were struggling.

At Glen Douglas cars arrived from Helensburgh to meet them. At midnight those still walking had blisters and were tired — but were still very determined.

At exactly 1.25am, 15 hours 5 minutes after they started, the first two completed the walk along Garelochside and arrived at the finish at Kidston Park.

After them came the other twelve who managed the full walk, and two more who had lifts earlier in the journey. It was 5.30am when the last group arrived at Kidston.

Throughout the walk a card record was kept of everybody to make sure that they were all accounted for at the end.

Planning to celebrate the anniversary — though not on the same scale — began in November 2013.

Jock Troup, who now lives in Peterculter near Aberdeen, said: “I came across the old local press cuttings about the walk, and reckoned it would be good if those who are still around, and interested, could meet up in May 2014, as near to the original date and hopefully during Christian Aid Week.

“I spoke to Douglas Sammon, and both he and Harry Jackson were supportive. We were all involved in the original Christian Aid committee, and Douglas and Harry were also Rugby Club founder members."

The plans came to fruition, and on Saturday May 24 twelve of the original participants met for a reunion and a five mile walk around the burgh. In the process they talked about old times, and raised £335 for this year's Christian Aid Appeal.