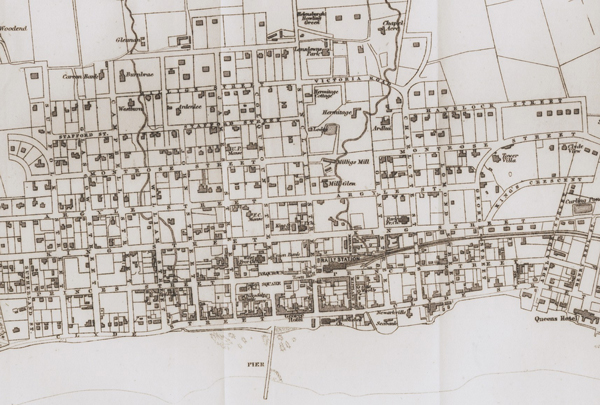 A REPORT compiled for Helensburgh Town Council on the state of the streets in the town 1845 gives a fascinating insight to the early days.

Report as to Condition of Streets of Helensburgh, 1845

Helensburgh 25th June 1845
According to appointment we have this day made a survey of the streets and report as follows:-
Clyde Street east end. The low end of Adelaide Street, in a very filthy state, Mr Laird has fenced in the one half of it and keeps his watch-dog chained near the center of it.
Mrs Bruce has no foot path along her property faceing the street, it is in a very bad state with filth and rubbish.
Muirheads property faceing Clyde Street is railed in, a great encroachment upon public street, and no foot path.
The other two properties adjoining to the west have no foot path, and all the properties on the north side of Clyde Street, to the east of Adelaide Street, have a considerable part of Clyde Street enclosed as part of their Feus, and no foot path along their properties.
Menzies Property, foot path to Clyde Street much grown with nettles &c. and no paths to back streets.
Low end of Maitland Street, from Toll road to Water side, in a very bad state with nettles and rubbish, no foot paths.
Mrs McNicols Property, fronting Clyde Street, crib stones and water course quite broke up, the water lyeing stagnant, foot path in very bad state.
Low end of Sinclair Street, from Clyde Street to water side, covered with wood and dunghills.
Wood belongs to Mr Buchanan Wright, and dunghills to Mr Js. Colquhoun.
John Street, in a very bad state, has never been formed, no water courses, or foot paths, the water from the upper end runs right across Princes Street. The Fewers are Mr Morris, Mr Cochrane, McArthur, Dr McFarlane, Dr Grahame, Mr Nairn, Mr Peaston, McAuslane, Mills.
King Street is quite unpassable, from west burn to Luss road.
Princes Street, Mr Morris fence dyke quite broken down and foot path in bad repair. Robert Cochranes foot path very uneven and out of repair, Mr McArthurs foot path do do, Mr Peastons do do.
Allan McLean, no sywer or water course along footpath Miss Henderson do do.
Street opposite this property in bad order.  Mrs McFarlane, very bad fence to Princes Street, foot path to be dressed off, Has no foot path to James Street.
James Street, upper end in a very bad state the drain in centre of street being quite destroyed by the people openning it, to get at the small burn which it conveys down.
The foot paths are very bad in the upper end of street, and those in lower end will require to be dressed and levelled, likewise round the Independent Chapel ground, and the properties of Messrs Watson, & Forrester.
Princes Street, to east of James Street, water lyeing stagnant, no sywer or open cut along the foot path to take it away.
Colquhoun Square, in very bad order no path formed round it, is made a receptacle for stones, lime, dung, &c &c in its present state is more a nuisance than an ornament.
Sinclair Street.  Mr McLauchlans foot path opposite Bake house, very low and dirty.
Mr Frazers foot path in bad order.
Mr Buchanans property has no foot path to Princes Street, there is no open cut to take the water off along the south side of Princes St to Maitland St, and the water lyes quit stagnant at that vacant Feu, south east corner of the square.
Mrs McNicols water drain corner of Sinclair Street in very bad order.
Corner of Princes Street and Maitland Street Willm Bain, foot path to be dressed.
Dr McFarlanes foot path in Maitland Street quite blocked up with rubbish, quite unpassable.
Grant Street in very bad order, hollow in centre, no foot path on west side.
Donald McAllum, has shrubbery planted round his house where a foot path should be, and has no foot path formed round his property.
John Sutherland has his hedge planted too near the street [Princes Street], and has a stob and rafter fence put up where the foot path should be, about three feet outside the line of his Feu.
Wallace Street hollow in center, no foot path on west side, Fewers, Js. Hunter, Dd. Bain, & Js. McMurray.
Lomond Street, Robt. Bisset has no foot path formed to this street, and stagnant water lying in Princes Street, no water course to take it away.
The Feuars at upper end of Lomond Street have inclosed and planted about one third of the street on either side, a most awkward looking thing.
Stevensons property has no foot path to Princes Street and street very bad.
Robt. Service has made a good foot path but the street is in a very bad state.
Corner of Princes Street and Georges St Miss Colquhoun has no path formed, the street is very bad having no drain or water course
Mrs John Weir has a Boiler and Dungstead where a foot path should be, to Georges Street, likewise a pigsty close to the street, on the unfeued ground to the north of her property.
No foot path on west side of Princes Street, to the east of Georges Street, and the street in very bad order with Whins etc growing on it. Feuars, Mr G.Young and Miss Mirrelees.
Glenfinlas Street, very unevenly, has never been formed, greater part of it has no foot paths, Fewers, unknown, Menzies, unknown, McGilvery, Mrs Ewing and Miss Dixon.
Mrs Ewing has a stob and rafter fence on the foot path to Princes Street, the hedge inside is now a good fence.
Adelaide Street, the Feuars on east side have fenced in about one half of the street, and planted trees thereon
[signed]
James Breingan
David Melville
Peter Walker
David Waddell