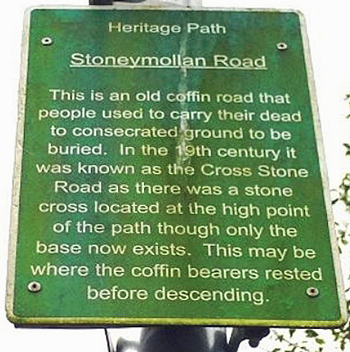 COFFIN ROADS pass through Helensburgh and District, but there is debate about which old tracks qualify for that macabre name.

The Stoneymollan coffin road runs from Balloch to St Mahew’s Chapel at Cardross, and is part of both the Three Lochs Way and the John Muir Way.

The name Mahew is a form of Mochta, and there are several saints of that name in the old records of the Celtic Church. 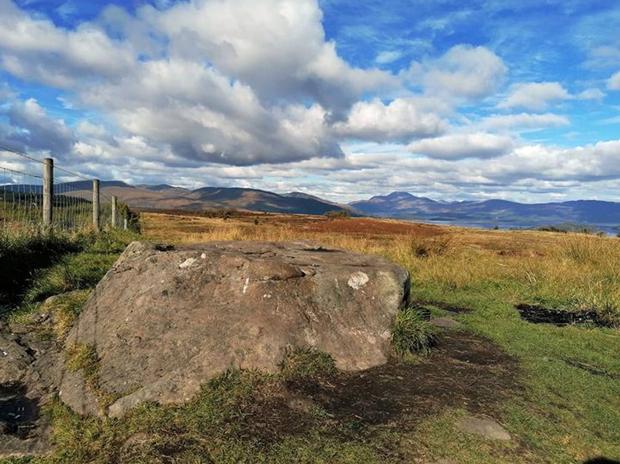 In a post on the Helensburgh Memories Facebook page, Callum McKay wrote: “This is an old coffin road that people would use to carry their dead to be buried in the consecrated ground at St Mathew’s Chapel in the clachan of Kirkton, near Cardross.

“In medieval times only certain churches had burial rights and these churches were often few and far between.

“Many rural settlements were remote from a church and so people were often faced with a long trek to the nearest cemetery. The coffin had to be shouldered and carried the whole way.

“In the 19th century it was known as the Cross Stone Road as there was a stone cross located at the high point of the path, though only the base now exists (above).

“The coffin would have been placed on this stone to give the coffin bearers a rest before the descent to the burial ground of St Mathew’s Chapel.”

In an article by Glasgow-based walker and historian Vivien Martin about the Stoneymollan road for iScot magazine in June 2018, she pointed out that coffin roads were not ‘roads’ but were actually rather narrow tracks or paths.

“Over time, numerous eerie superstitions became attached to these old tracks,” she said.

“The coffin bearers must not step off the path on to neighbouring farmland or the crops would be blighted; spirits liked to travel in straight lines, so the paths often meandered; spirits could not cross running water, so the paths crossed burns.

“You could lose a following spirit at a crossroad, so the route would have a crossroad!”

Local historian and Helensburgh Heritage Trust director Alistair McIntyre named two other local routes over which coffins, or at least corpses, would have been carried.

“Prior to the formation of Arrochar parish in the mid 17th century, and the later provision of a church there, the MacFarlanes of Arrochar regarded Luss Church as ‘their’ church, and a number of clan chiefs are interred in the churchyard there,” he said.

“The usual route taken by the MacFarlanes to get to Luss was by way of the String Road, an ancient track from Arrochar, leading by way of a high-level hill pass to Invergroin, about halfway through Glen Douglas.

“From there, the route lay by another hill track close to Doune Farm, into upper Glen Luss.

“When the clansmen journeyed to Luss Church, they left their weapons at a place called Cnoc an Airm, close to the former Luss Schoolhouse, before proceeding to the church itself.

“Also, on page 162 of W.C. Maughan’s ‘Rosneath Past and Present’, the author refers to the ‘ancient custom’ of taking local dead from Kilcreggan to Rosneath churchyard by a time-honoured route.

“Maughan said that the track was taken from the landing-place at Portkil by an oblique route over the shoulder of the high ground above the old mill near the Free Church to Rosneath churchyard.”

Alistair stressed that he had never heard of either of these routes being referred to as a coffin road, although that may have been their purpose.

Rhu-based archaeologist Fiona Baker believes that the Highlandman’s Road is also a coffin road. It is marked as Church Road on John Thomson’s 1820 map, surveyed in 1818 by John Wood.

Fiona said: “The dead were carried from Glen Fruin to Rhu from at least the foundation date for Rhu of 1648, though according to Battrum’s 1875 Guide there was, not surprisingly, a chapel at Rhu before that, and of course also at Ardencaple.

“The burial ground at St Brides (Ballevoulin) was probably out of use by the medieval period.

“The Highlandman’s is thought to be on a Stirling to Iona pilgrimage route. I think it is quite possibly the case, and it links St Kessog’s to St Bride’s to St Modan’s all of which would have been significant stations.”

Alistair McIntyre responded: “I like your suggestion of a Stirling-Iona pilgrimage route. This is an idea I've been nurturing for many years — something I picked up from the writings of W.C.Maughan.

“I'd argue that for anyone coming from say, Cambuskenneth, and heading for somewhere like Iona, a logical route would be by Strathendrick, Balloch, Rhu, and Rosneath.

“In developing this idea further, I also look to place-names linked to St Modan, as his journeys would appear to mirror such an itinerary, to an extent.

“If, as suggested, he was of the St Columba School, you could look to an eastwards progression through Balmodan, near Ardchattan, Kilmodan in Glendaruel, Modan/Aedan associations at Rosneath, and much further east, St Modan's R.C. School at Falkirk, as possible evidence of his progression.

“The good saint is said to have worked in the latter area for a time. However, that great Celtic place-names scholar, William J.Watson, points out that no fewer than 16 "Saints" were called Modan (= My Aedan)!

“Even so, keeping to the place-names theme, researcher Peter McNiven has suggested that the distribution of ‘Spittal’ place-names through Strathendrick and beyond might point to a possible trade or pilgrimage route.

“The trouble with such fine thoughts is that the likes of Peter Yeoman's book ‘Pilgrimage in Medieval Scotland’, published in 1999, makes no mention of any such route.”