GORTAN on Loch Longside — home to both highly regarded Glasgow MP James Oswald and leading Gaelic folk tale collector John Dewar — was once an estate, but the name is little known nowadays.

It had a long colourful history, was mentioned in a 1522 charter and possibly was in existence well before that.

In that charter, John Colquhoun of Luss granted the lands of Tullichintaull and Gortan to his son, Patrick Colquhoun, and his male heirs. Tullichintaull was a farm on the north side of Gortan.

Timothy Pont’s map of the 1590s shows the settlement of Gortan lying a little above the present Glen Douglas road end.

So the Colquhouns of Luss were at this time firmly in control of the destiny of Gortan. But in the 17th century McFarlane of Arrochar was in the driving seat. A similar change took place at Tullichintaull.

Such changes in lairdship raised a few eyebrows, because of the deadly blood feud between the chiefs of Colquhoun and McFarlane in the closing decades of the 16th century.

Sir Humphrey Colquhoun and Humphrey McFarlane were just two casualties of this vendetta. Relations were further strained by legal action raised by Colquhoun, alleging numerous thefts of livestock by the McFarlanes.

The gathering pibroch of the Clan McFarlane ‘Thogail nam Bo’ — The Lifting of the Cattle — is symptomatic of their philosophy in those troubled times.

D.J.Johnston Smith, author of a Master’s thesis on the McFarlanes, found a document among the McFarlane papers at the Procurator’s Library in Glasgow which stated: “In 1619, John McFarlane, 15th Clan Chief, made an assignation to his grandson, James, of the lands of Gortan.”

A land deed of 1622 discloses that “John McFarlane of Arrochar, for certain sums of money, sold the lands of Gortan, in the lordship and barony of Luss, parish of Rosneath, to Andrew McFarlane, lawful son of Andrew McCoull McFarlane, Blairvoyak, to be held of the granter and his heirs-male in fee and heritage forever.”

James MacFarlane, author of ‘History of Clan MacFarlane’ in 1922, argues that a partial reconciliation served as precursor to a more general deal.

He refers to an accommodation arrived at in 1603 between Alexander Colquhoun of Luss, and the McFarlanes of Gartartan, a cadet house of McFarlane of Arrochar. As this was not long after the Battle of Glen Fruin, the timing could be significant.

As evidence of a more general settlement, James MacFarlane highlights a decree issued by the Lords of Secret Council in February 1610.

At the centre of their deliberations was a legal action against Alexander Colquhoun of Luss, raised by Gillemor MacIlerich of Little Hills, Glen, who had sought Colquhoun to exhibit one of his tenants, John MacDouill Vic Neill MacFarlane, whom, he alleged, had murdered his daughter Catherine.

The Lords of Secret Council acquitted Colquhoun from any such action, referring to the feud between the clans, and pointing out that to proceed with the action could serve to revive the feud.

The Crown had been working hard behind the scenes, with the involvement of nobles such as the Duke of Lennox, part of a wider drive by King James the Sixth to bring under control the lawlessness in various parts of the country.

A reconciliation between the Colquhouns and McFarlanes would go a long way to explaining the change in ownership of Gortan at this important period in history, but the Colquhouns of Luss remained as feudal superiors.

James MacFarlane says that Dugal, the second son of Walter McFarlane, 9th Clan Chief, founded the family of Tullichintaull, from whom came the McFarlanes of Finnart and Gortan.

Sir William Fraser offers a clue in his 1869 book ‘The Chiefs of Colquhoun’: “The lands of Gortan were granted by the McFarlanes of Arrochar to a younger branch of the family, who were usually designated as of Gartartan.”

Gartartan is, or was, located near Gartmore, Perthshire, and Gartmore Castle is said to have been built by them towards the end of the 16th century.

There was to be a succession of McFarlane lairds of Gortan, who would hold sway for the best part of the next two centuries. Many of their tenants were also McFarlanes.

All was well for the Gortan lairds until the time of Malcolm McFarlane, who was laird in the early 1730s. Financial problems arose, though the cause is not known, and in 1733 Malcolm found it necessary to borrow £300 from the Glasgow firm of Peter Murdoch and Sons.

Over the years, the Murdochs played a vital role in public life, providing Glasgow with two Provosts. But they were also hard-nosed businessmen, and the loan had to be paid back by 1774. Interest was chargeable.

By 1768, lawyers letters showed that little, if any, of the capital had been paid back.

One of the legal agents was Thomas Graham, a nephew of Agnes Buchanan, spouse of Malcolm McFarlane.

Among the Oswald papers is a scribbled note from William McEwan to Graham. McEwan, most likely also a legal agent, discloses that he had spoken to “Gortan” — presumably the heir — earlier that day. He also refers to John having “gone west”.

Letters like these, cryptic and enigmatic, make it difficult to work out what is going on. But using clues from the letters and other sources, it can be inferred the heir is a John McFarlane, and that “gone west” refers to the West Indies.

A letter of 1774, from Thomas Graham to John Murdoch of the family that made the loan in 1733 is very telling.

It stated: “When I paid you £200 for the disposition of your claim to Gortan, I did it, and advanced to the heir about £30 more, in view of his promise to extinguish the debt, or at least keep down the interest, instead of which he has been away since 1768, and has not remitted the £30, nor a shilling of the principal — a great disappointment.

“He has not written to me since 1770. I am heartily sorry for the difficulties. I wrote to him I would use some method of getting payment. It will be necessary to produce the adjudication.”

A letter of 1768 from John McFarlane in St Kitts to Thomas Graham contains nothing of substance. But his presence there suggests a connection with the sugar plantations.

Malcolm McFarlane of Gortan died around this date. In 1770, a tack — lease — was made by Agnes Buchanan and Thomas Graham to Patrick McLean, tenant in Makleglen, parish of Lochgoilhead, presumably a farmer.

The terms included: “The said lands, presently possessed by John and Walter McFarlane (are to be leased) for the space of 10 years from 10 May 1771.

“Reserved from the tack is that maile of land called Craggan, with sole right of cutting wood, brush and timber from said whole lands of Gortan and Craggan yearly. There is a limit of 45 cows, 45 sheep, and 4 horses or mares.”

The reservation of Craggan from the tack could be because the laird’s house was located there.

Ross’s map of 1777 shows two buildings at the site, one a conventional dwelling, but with another superior building, though not so grand as those of Colquhoun of Luss or McFarlane of Arrochar. 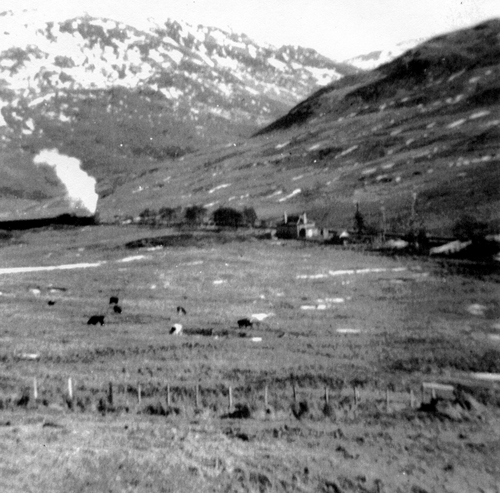 The Craggan name could refer to the laird’s house, while Craganbreck might have been the tenant’s home.

A 1773 letter from Thomas Graham to Sir James Colquhoun of Luss, next up the ladder in the hierarchy of land holding, seems part of a determined effort to settle debts and put the affairs of Gortan on a more stable footing.

Given the financial pressures from the loan of 1733, it is surprising that Gortan was not given over to cattle or sheep husbandry. But Graham appears to have been successful in his drive for stability.

The estate was sold in 1798 to Alexander Oswald, and the long McFarlane association with Gortan came to an end.

The new laird wasted little time in making his mark. A precept was issued to tenants George McLellan Snr, of Preistelloch, and George McLellan Jnr,  of Drumfad, to flit and remove themselves, their sub-tenants and cottars, and dependants and their families, servants, cattle, and goods by Whitsun 1799.

This cleared the way for the arrival of the Dewar family shortly after, and John Dewar, the renowned folklorist, was born to Alexander and Mary Dewar on the estate in 1802.

On May 15 1829 James Oswald sold Gortan to Sir James Colquhoun for £2,990, and from then on, Gortan ceased to function as an estate and was just another farm in the Colquhoun portfolio.

The Census of 1841 shows that at Craggan was Duncan McLellan (40), agricultural labourer, with Isabella Collins (20), servant, the only other member of the household. At Gortan were John Campbell, herring fisher, his wife and four children.

The 1851 Census states that at Craggan was the unmarried Donald McLellan, farmer, head of household, with five male and female servants, while Gortan has two families.

By the 1861 Census, a major change had taken place. A large modern farmhouse was built at what had been Gortan around 1855, and it was named Craggan Farm. Robert and Jane McLean were there with their three children and two relatives, two servants and three lodgers.

Two other houses are listed as Craggan cottages, one close to the farmhouse, the other at the site of the original Craggan. Over time the farmhouse became known as Low Craggan, and the cottage High Craggan.

Around this time the farm doubled, if not tripled in area. Commercial rearing of blackface sheep, and some cattle, predominated as there was not much land suitable for arable farming.

The name ‘gortan’ means a small enclosure, and Gortan continued to appear on Ordnance Survey maps into the 20th century. 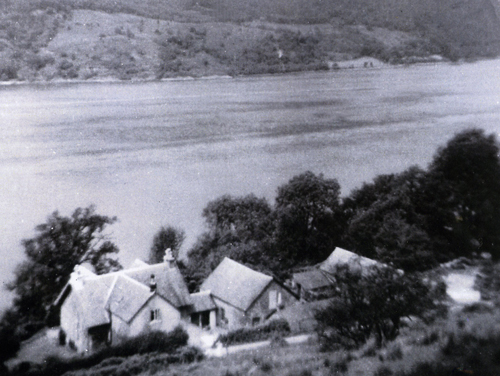 The last farmer at Craggan was Graham Cooper, whose family home was Pinelea, East Montrose Street, Helensburgh. He and wife Mary took up tenancy of the farm around 1925 and lived there until the early 1930s, during which time son Douglas was born.

At that point Dugald Black, their live-in shepherd, married. The Coopers moved to Helensburgh where Graham opened Cairndhu House as a hotel, enabling Dugald and Agnes Archibald, his bride, to set up home in the farmhouse.

Dugald Black was shepherd on the farm until his retirement in 1957, when he was presented with a silver medal by Sir Ivar Colquhoun, marking 32 years of service.

In the early 1960s the construction of the ammunition depot at Glen Douglas changed everything. Most of the land that was Craggan Farm was bought by the MOD, ending sheep farming. The ground was planted with Sitka spruce and the houses demolished.

The Cooper family kept up the farming tradition, as son Douglas farmed for many years at Glenmollachan, by upper Glen Luss. 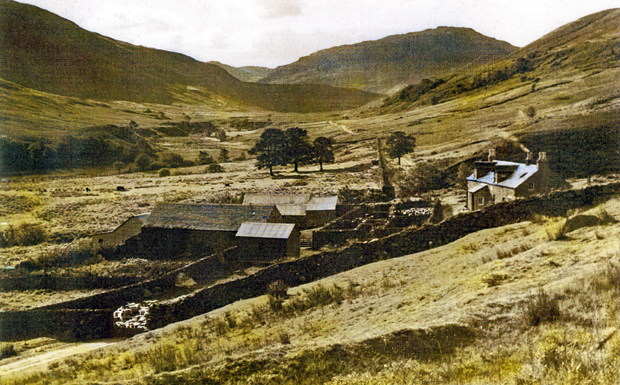 The top picture looks north up Loch Long to the MOD jetty and the Finnart Oil Terminal. Above the aircraft carrier are Craggan Hill and Tullich Hill. The bottom picture, taken by Alexandria photographer Peter Leddy c.1945, shows Glen Douglas looking west, with Invergroin Farm in the foreground. The picture above right was taken from High Craggan c.1953, and shows a steam train toiling south towards Glen Douglas summit — there used to be a large signpost, proclaiming Glen Douglas Summit, 564 feet. That summit marks the meeting place of Glen Mallan and Glen Douglas. The picture above lefty shows Low Craggan farm, c.1965. It was on, or close to, the site of the original settlement of Gortan. The building was erected about 1855, and demolished in late 1975.