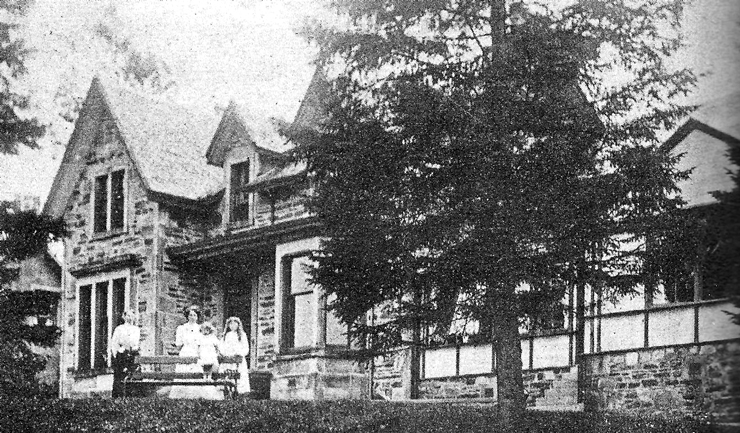 THE small village of Clynder once boasted four houses serving as holiday homes.

Doreen Anderson in Australia, who has been conducting family history research, supplied the Heritage Trust with details of Hillside.

She said: “In the 1920’s my late father and his five siblings attended this Children’s Holiday Home on a few occasions.

“In 1998 I visited the area with my late father and his brother. They mentioned how they spent holidays there in the big house. My uncle is now 95 years-old and his memory on such matters is failing, but he does remember holidays at Clynder very well.

“I was hoping that Hillside is where the Grant Family stayed and that there may be a register of the names of the child guests of the house.”

Doreen was subsequently told by a family friend who regularly visits her uncle that he remembers that the head nurse was a Mrs Anderson who ran a kindergarten in Phoenix Park Terrace, Garscube Road, Cowcaddens, Glasgow.

He and his siblings would catch a bus from Buchanan Street bus station to Helenburgh, and then catch a local bus to Clynder.

The 1921-2 Helensburgh Directory records that Hillside Seaside Holiday Home was run by a Miss Young.

The Buchanans, a wealthy shipbuilding family, purchased Hillside Holiday Home some time after 1913 for use for annual holidays for children of the Phoenix Park Kindergarten, where their unmarried daughter was a keen volunteer.

The home also provided a holiday for other children in need, such as invalids or convalescents. The opening was attended by Princess Louise, Duchess of Argyll, daughter of Queen Victoria, who lived at Rosneath Castle.

Miss Buchanan, who lived in a big house in Polmont, eventually left Phoenix Park to start a nursery school in Polmont.

An article in the Helensburgh and Gareloch Times in August 1919 stated that the Home had been carrying out good work during the summer, and many young mothers and children from Cowcaddens district enjoyed a delightful change.

The Home was stated to be one of the ‘schemes’ of the girls of Laurel Bank School in Glasgow, who gave a performance of "Guy Mannering" in support of it.

Hillside Home was still operating under the same name in 1939 with Miss Young the contact, as she had been throughout the 1920s and 1930s.

John Hood's 2013 book "The Country Houses, Castles and Mansions of Dunbartonshire" includes two photos of Hillside, one taken in the late 1920's when it had been converted from a private home into a bed and breakfast establishment.

John wrote: “In 1913 it was offering ‘board’ at moderate terms, drawing attention not only to the magnificent view afforded of the Gareloch, but the availability of ‘plentiful water’.”

The story of The Grove Holiday Homes goes back to 1929, when a Glasgow-based voluntary body known as the South Western Gospel Mission realised an ambition to provide a holiday home for poor children.

The Mission had as its aims “the social, moral and spiritual elevation of the non-church going classes, and the helping of the deserving poor in times of need, thereby preventing them from sinking into lower depths of ruin and degradation.”

Operating out of two halls in the city, temporal outreach included the Poor Children's Free Breakfast, served on Sundays at 8.30am.

During the first winter, some 10,000 breakfasts were provided, and boots and clothing were also given out.

Plans to establish a holiday home in the country for poor children were realised through the acquisition of a large villa at Clynder, The Grove, located on the hillside behind the shops.

The seaside setting was thought to be idyllic, while transport links with the city were good.

By 1930, it was stated that 300 children had spent from between a fortnight and a month at the new facility.

Demand was obviously high, because, by the following year, the Home had been expanded to incorporate another nearby property called Woodburn.

The Grove was to be for use by girls, while Woodburn was to be for boys. Even so, demand evidently outstripped supply, and by 1933, the Mission had taken over the use of a third property, a house called Sauchaen.

The next two decades were the heyday of the scheme.

In 1940, the Mission reported that: “The Holiday Homes provide a holiday, lasting for two weeks or longer, as cases may require, for poor and necessitous children of our city and districts.

“The Homes are commodious, well-ventilated, and thoroughly sanitary, having an efficient staff to carry out the necessary work.

“The number of beds in the Homes is 60. Splendid outdoor recreation is provided. Visitors are invited to call and see the Homes. These are sustained by voluntary contributions.”

From about 1950, the first signs of contraction began to appear, first  with the sale of Sauchaen, and then of Woodburn, both returning to being private homes.

By the end of the decade, only The Grove itself remained, and it showed it still had a very real function to perform, by continuing to function into the late 1980's, and possibly beyond.

A number of former guests have recorded their memories of life there.

One lady recalled: “It was a big, spooky house. I used to love going down to play in the park at the back.”

Another who was there for much longer than a holiday wrote: “ It was stunning inside, with a big dorm and rows of beds with white sheets. I think there were six bunk-beds in my dorm.

“Being an inmate wasn't that good — everyone thought we were naughty kids or orphans.

“I still had my dad in Greenock, having just lost my mum, and he'd been told it would give him a break to let the kids go to the Home for a while.

“They never asked us kids if we wanted to go there — they just took us. It affected my life so much, and made me more protective of my family.

“Some of the kids were there because they had lost a parent, or were orphans. The long-term just accepted it, as they didn't have a home to go back to.

“I was lucky — eventually my dad and sisters got us home.”