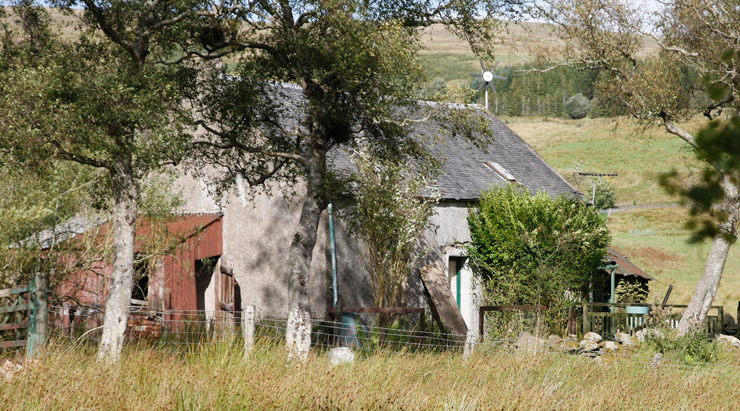 THE picturesque if decrepit Tamnavoulin Cottage in Glen Fruin was sold in 2015 by owners Luss Estates.

The Glasgow office of estate agents Savills invited offers over £140,000, as planning permission had been obtained for a more modern dwelling, but the property sold for £97,123 to a private buyer.

It is in a stunning location on the west side of the glen near Drumfad Farm, with wonderful views in all directions.

Helensburgh Heritage Trust director Alistair McIntyre said that the name of the small cottage derives from the Gaelic for ‘hill of the mill’.

The mill was a waulking, or fulling mill, where woven wool was pounded into a denser fabric suitable for use as carpets.

It was located beside the main river, down from the cottage and close to one of the deeper pools in the Fruin river,

According to W.C.Maughan, author of ‘Annals of Garelochside’, the remains of the mill were still to be seen at the time he wrote the book in 1897.

The mill is depicted specifically as a waulk-mill at least as far back as Edgar's map of 1745.

Alistair said: “This is perhaps unexpected in an area effectively lying within the South-West Highlands, where sheep did not form a mainstay of the farming economy until after mid-century.

“When exactly it became a waulk mill is unclear. It is at least possible it was converted to that use from a pre-existing mill.”

The vicinity of the cottage is thought to have been the site of a dwelling as far back as the 15th century, while one account gives the date of the present building as early 19th century.

Externally at least, the cottage, which internally was divided into two in layer years, seems to have been little altered over many years, as shown in a variety of old photographs.

Alistair said: “With ownership of Tamnavoulin being vested in Luss Estates until now, it seems reasonable to suppose that for much of its existence, the cottage would have been occupied by someone working for the estate.”

By the 1930's, and quite possibly before then, the cottage was tenanted by members of the well-known Hattle family.

It was also during this period that the cottage began to attract an unexpectedly colourful reputation, through its associations with Philip Cox.

Cox came to Helensburgh as a young musical graduate when he took up a post as organist at St Michael's and All Angels Church.

Described as a brilliant pianist and all-round musician, Cox quickly made his mark in the town, becoming director of the Lyric Choir.

However it is said to have been rather his passion for opera that came to symbolise his presence at Tamnavoulin.

According to one witness, anyone passing by the cottage of a summer evening might well have come across sights and sounds that looked to have come straight from ‘Brigadoon’, with couples “setting, turning and swirling their way across the green sward surrounding the cottage”.

Indeed, Cox is said to have invited along half of the operatic cast of the local society to an evening of country dancing under the open sky.

One resident of Glen Fruin recalled: “You could be walking home about midnight, and suddenly a piano concerto would ring out around the hills.

“This would be Philip Cox . . . he used to practice and play halfway through the night!”

A lover of the countryside, Cox used to wear the kilt when out and about, and is remembered as always being full of fun.

Helensburgh resident Phyllis Thompson said: “Philip was a kenspeckle figure, tall, lanky, always in a kilt, and he drove like mad in his tiny BabyAustin car. He had to fold himself up to get I to it.

“He taught me piano which was great fun, as he would bring one of his instruments with him to accompany my playing. Poor man though, he was always ailing, very chesty, so his life style was not good for his state of health.”

Such a musical talent, coupled with an outgoing personality, enabled him to bring to Glen Fruin famous people like Kathleen Ferrier and Eileen Joyce.

Sadly, all this glamour and excitement came to an end when Cox contracted a serious illness and died during the Second World War.

Post-war, the singular appearance of the cottage and its dramatic setting in Glen Fruin began to catch the attention of film-makers.

In the mid 1960's, the STV drama series ‘No Hiding Place’ had an episode featuring scenes at Tamnavoulin, when former Helensburgh man Ian MacNaughtan played a lead role.

They shot scenes at the cottage in darkness as they said they could create more atmospheric daylight through lighting.

Not long afterwards, the house formed one of the settings in another TV drama series called ‘Glaister’, based on the life and times of John Glaister, Professor of Forensic Medicine at Glasgow University.

Series producer James Sutherland explained that he had learned of Tamnavoulin from his sister-in-law, who lived in Helensburgh, and who was a close friend of the Borlands of Duirlands Farm.

He added that he'd always wanted to visit the ‘wee hoose’.

“Today,” Alistair said, “Tamnavoulin has a somewhat timeless air about it, set as it is against the sweeping backdrop of the hills and the long, pastoral glen.

“But it could all have been so very different.”

In the late 1970's, plans were announced to form a large petro-chemical complex in Glen Fruin.

Opinion was divided, with Strathclyde Regional Council opposing the plans, while Dumbarton District Council came out in full support.

The matter eventually came to a Public Inquiry, and in the summer of 1980, the Secretary of State for Scotland ruled against the complex.