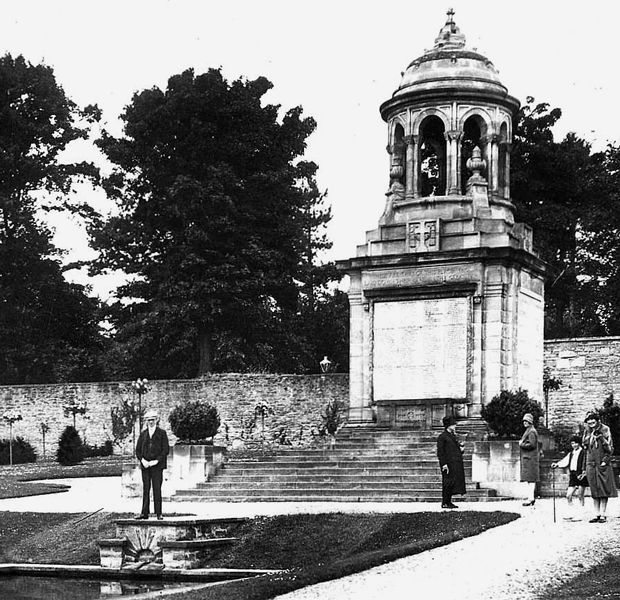 HELENSBURGH pays tribute to the fallen of two World Wars and other conflicts on Remembrance Sunday.

The service takes place in front of one of the most elegant war memorials in Scotland within a superb Garden of Remembrance.

It has been overlooking Hermitage Park since 1922, and had been in the mind of the Town Council since the signing of the Armistice in 1918. Just four days later a special meeting was called to discuss a suitable memorial.

Distinguished local artist James Whitelaw Hamilton, who was a town councillor as well as being one of the Glasgow Boys group of artists, was the man who suggested the old walled garden of Hermitage House, already a public park, as the ideal location.

His colleagues agreed, and a design competition was arranged.

Whitelaw Hamilton, whose son Leslie had been killed in the closing days of the war, encouraged his brother-in-law, distinguished local architect Alexander Nisbet Paterson, to enter — and he won.

Detailed planning and the placing of contracts then went ahead. Trail Brothers were awarded the main building contract, Charles Henshaw of Edinburgh fashioned the bronze work, and the heavy ornamental wrought iron gates were provided by Messrs Smith & Co. of Glasgow.

The monument is 40 feet in height, and of white freestone. The lower part is square, the upper circular, crowned with a dome which is supported by eight clustered shafts.

The dome is encircled with a broad wreath of laurel in cast bronze, with a carved stone crown surmounted by a four armed cross of gilded bronze.

The southern face of the lower part contains a panel of rose-coloured granite. Over the panel runs in gilded letters a simple inscription, with the names of the fallen below.

The monument is on a raised platform and in front stretches a long lily-pond, which for Health and Safety reasons has been kept empty for many years.

The garden, which has yew trees, roses, and flower beds, is maintained by Argyll and Bute Council. Repairs to the walls were conducted a few years ago when Helensburgh Heritage Trust obtained a grant from Babcocks at Faslane.

The memorial was officially unveiled on Sunday June 25 1922, and the Provost, Major John F.Duncan, said it was a poignant yet striking reminder of the dreadful carnage of the First World War, while yet forming an appropriate means by which the community could pay its respects to the fallen.

The Helensburgh and Gareloch Times reported that the morning of the unveiling ceremony was overcast, but in the afternoon the sun broke through.

The crowd gathered in front of the imposing gates began to swell, as the various uniformed companies arrived and took up their positions around the base of the monument.

Members of the armed forces were in full marching kilts, and wore shrapnel helmets.

Paraded around the right hand side were local troops of Boy Scouts, Wolf Cubs, Boys Brigade, and the local Pipe Band. In front, facing the monument, was a long line of Brownies, with a strong contingent of Girl Guides behind.

On the left, the band of the Clyde Training Ship Empress, moored in the Gareloch, was drawn up, along with a smart section of boys from the vessel.

On either side, members of the sub-committee responsible for overseeing the project, under the convenership of J.Whitelaw Hamilton, were grouped.

The gates were opened, and the crowd moved forward to take up all available positions, with many others gaining vantage points on the surrounding walls.

The Times report continued: “High on top of the beautiful monument, gleams and glitters the cross in the bright sunshine. There it stands, the highest thing in the Park, as the mark of the grief of the community.”

The ceremony was opened by Provost Duncan, wearing the full regalia of office. He told the crowd: “Fellow citizens, this is without a doubt the most historic as well as the most solemn and memorable day in the annals of this Burgh.”

The unveiling was carried out by Sir Iain Colquhoun, Bart., in his capacity as Lord Lieutenant of the County, who might well have reflected that he himself had been sentenced to death by court-martial, for having allowed his men to fraternise with the enemy at Christmas 1915.

Following the fairly widespread truce of Christmas 1914, the military authorities drew up contingency plans to stop anything similar happening in future. In the event, a German officer approached Sir Iain at Christmas 1915, asking for a short truce to allow burial of the dead, to which an initially reluctant Sir Iain agreed for threequarters of an hour.

Both sides took the opportunity to retrieve and bury their dead. The result was an isolated truce, and so only Sir Iain and a colleague found themselves in deep trouble. Both were fully reprieved after being found guilty and sentenced to death — and Sir Iain went on to have a distinguished war record.

Sir Iain said: “In asking me to unveil your War Memorial, I consider you are doing me the highest honour.

“To the land, sea and air forces of the County, this Burgh contributed no less than 1,100 men, or a total of 13% of the entire population. Of that number, more than 205 gave their lives in the discharge of their duty.”

He then formally handed over the memorial to the keeping of the Provost and the Town Council.

West Helensburgh minister the Rev W.H.Leathem, wartime chaplain to the British Expeditionary Force in France and Belgium and a former minister at Inversnaid, Renton and Garelochhead, dedicated the memorial, then buglers from the Empress sounded The Last Post and the pipers played The Flowers of the Forest.

Soldiers on duty presented arms, and relatives and friends placed many wreaths. The ceremony ended by a march past and salute by the troops and various companies present.