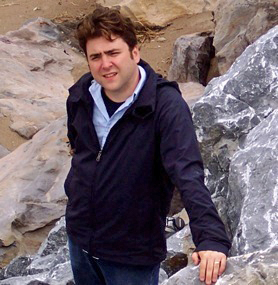 A YOUNG couple emigrated to the United States from Helensburgh in the 1890s . . . and founded a dynasty which included several smugglers and is now spearheaded by a playwright.

He is Isaac Rathbone, whose World War One tragic comedy ‘Captain Ferguson’s School for Balloon Warfare’ was performed in the 2012 Edinburgh Festival Fringe.

Isaac, who is 34, has been working on his family tree, which goes back to his great great grandfather, Helensburgh joiner Christopher Rathbone.

Christopher was born in Glasgow in 1859, the son of a potter of the same name, and had a brother John and a sister Christina.

When his father died a few years later, his mother Catherine moved the family to 14 Glenfinlas Street, where she began a business as a laundress and mangle keeper, which she continued until at least 1891.

In 1884 Christopher married domestic servant Elizabeth Wright in her home village of Old Kilpatrick, and he set up in business at 19 Lomond Street in Helensburgh as a journeyman joiner. But about 1889 the couple decided to emigrate to America.

Isaac said: “According to family stories, the boat Christopher was on docked in New Haven, Connecticut, before reaching New York City — and he jumped ship and entered the country illegally.

“Christopher and Elizabeth lived in the borough of Brooklyn in New York City where they raised five sons. Christopher continued to work as a carpenter and eventually ran his own automobile crating service.

“He passed away sometime in the early 1920s. Because he passed away when my grandfather was a baby, not many specifics of his time in Scotland are known. This was the reason for my particular interest in him.”

The Rathbone family continued to lead a colourful life. They used their connections back in Scotland to obtain illegal gin and other spirits during the prohibition period of the 1920s.

They owned a small trucking company, Rathbone Brothers, that normally serviced the local farmers in northern New Jersey, but they also used the trucks to transport the contraband from their pick up point in Raritan Bay.

Isaac said: “A favourite story is when a gas station attendant asked my great-grandfather, Tom, what he was hauling, ’Pianos’ was his reply. The attendant took one look under the truck and said, ‘Your pianos are leaking.’

“There are also stories of my great-great grandmother, Elizabeth Wright Rathbone, making personal trips back to Scotland to visit family and then returning with smuggled goods in her undergarments and brassiere.

“My grandfather, Ira, remembers as a young boy going to sleep at night and hearing either rival smugglers or the US Coast Guard exchanging gunshots with his father and uncles.”

Christopher’s eldest son, also named Christopher, was born in Helensburgh, but raised in the United States.

Shortly after Britain entered the First World War, the younger Christopher was sent a letter from his native country requiring him to fight for his country — but he politely declined the invitation. His brothers, who were born in the United States, were exempt from military service, as they worked in the automotive crating business, which was deemed a necessary industry for the war effort.

However many of the later Rathbones went on to serve in the United States Armed Forces, including World War Two, the Vietnam War and the Gulf War, and Isaac’s father, also named Tom, is a graduate of the US Naval Academy.

Isaac, who wore a kilt in the MacIntyre tartan when he married his wife Jennifer, has two sons, two year-old Thurston and six month-old Arthur.

He obtained a BA in Film at New York’s Hofstra University from 1996 to 2000, then spent three years at Queens College working backstage at the John Cranford Adams Playhouse. Next he spent three years as a senior technician at his old university.

Three years as a theatre manager at Shetler Studies followed, and in 2011 he became managing director of the Oracle Theatre Inc., of which he is a founding member.

He said: “Looking back, I did write a lot of sketches in junior high as well as a terrible full-length play for a high school creative writing class.

“But all through high school and college, I was either acting, working backstage or in the shop, directing, etc. It wasn’t until right after college that I started playwriting.”

A playwright for eleven years, his work is mostly in two distinct genres: dark comedy and historical.

His other historical works include a piece about a college campus during the turbulent Vietnam era as well as a series of plays about baseball.

‘Captain Ferguson's School For Balloon Warfare’ premiered off Broadway and was performed at the Roxy Downstairs in the Edinburgh’s George Square during the Festival.

Isaac said: “I would love to transpose some of my family research on to the stage or perhaps in novel or screenplay form. I love both Scottish and American History, and the life of Christopher Rathbone and his family perfectly blends the two together.”

It was his second visit to Scotland, the first being a holiday tour with his wife, and he intends to visit Helensburgh sometime in the future to further his research.