HELENSBURGH Heritage Trust was left with a mystery after fulfilling a sixteen-year dream with the opening of its Heritage Room in Helensburgh Library in West King Street.

But, although a number of experts on local history were present at the opening reception, none could solve the mystery.

Two busts are on display, with one of them instantly recognisable as the burgh’s first Provost, Henry Bell. But no-one knew who the other one was.

Trust honorary member and former reference librarian Mike Davis made the humorous suggestion that it was Tom Selleck of Magnum fame curiously dressed in a toga!

Mike said: “It came from under a table in the old Rhu Parish Hall along with the bust of Henry Bell and one of Billy Petrie, who had let me know they were all there and suggested I take them to the library.”

Helensburgh Heritage Trust chairman Stewart Noble took a very close look at the bust, and was able to identify the sculptor.

He said: “On the back at the top are the words ‘G E Ewing fecit’ and then further down it says Glasgow 1862.”

George Edward Ewing (1828-84) was born in Birmingham on July 8 1828, the son of sculptor and artist James Ewing, and he was the older brother of  sculptor James Alexander Ewing.

His childhood was spent in Edinburgh, and the family later moved to Glasgow, where they lived at 1 Antigua Street. After George married he and his wife, Sarah, lived at 3 Antigua Street.

He became the most successful sculptor of his generation in Scotland, producing busts in marble of prominent Scots and the Royal Family. His most important commission in Glasgow was for the statue of Robert Burns in George Square (1874-7), his only public statue in bronze, which was later completed with three bronze panels by his brother, J.A.Ewing, in 1885-7.

George moved to the USA in 1879, for health reasons. He worked in New York and Philadelphia, but failed to achieve enough financial success there and became impoverished.

He died suddenly at the Brevoort Hotel, New York, while working on medallion portraits of Sir Henry Irving and Ellen Terry. He was found dead in bed on the morning of April 26 1884, with his room full of gas from a light jet that had been left on.

The identity of the subject was established by Gary Nisbet, one of the team behind www.glasgowsculpture.com. He said: “As soon as the image of the bust opened I immediately thought of Sir Colin Campbell, Lord Clyde. Then having looked at images of him, I am certain that it is he.

“Ewing is known to have done a bust of Clyde which was exhibited in 1863, his year of death, and it could easily have been completed the previous year.” 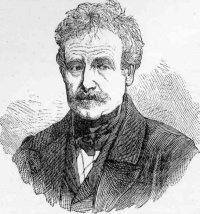 Cabinet-maker’s son Sir Colin Campbell (left) was born in 1792 in Glasgow and, with the assistance of his mother's relatives, he was educated at the High School of Glasgow, and afterwards at the Military Academy in Gosport.

In 1808 he received an ensign's commission in the 9th Regiment of Foot. He served in Spain under Sir John Moore and Wellington, taking part in the battles of Barossa and Vittoria. He displayed distinguished gallantry at the siege of San Sebastian, where, as well as at the Bidassoa, he was severely wounded.

In 1819-1825 he was in the West Indies, and in 1835 he was promoted to Lieutenant Colonel. In 1842 he was in China in command of the 98th Regiment, and at the end of the Chinese war he saw service in India, where he acquired such a reputation in the second Sikh war that he received the thanks of parliament and the title of KCB.

In 1854 he became Major General, in command of the Highland Brigade in the Crimean War. His conspicuous services at the battles of Alma and Balaklava, and during the war generally, were followed by him taking command when the Indian mutiny broke out.

Landing at Calcutta on August 29 1857, he relieved Henry Havelock and Outram at Lucknow, and crushed the rebellion entirely before the end of the year.

For his services in India Sir Colin received the thanks of both Houses of Parliament, was created a peer with the title of Baron Clyde of Clydesdale, and was awarded an income of £2,000 a year. In 1862 he was appointed Field Marshal.

He died, unmarried, at the residence of his friends Major-General and Mrs Henry Eyre, Government House, Chatham, Kent, on August 14 1863, and was buried on August 22 in Westminster Abbey. His peerage became extinct.

One question remains — how and when did this important and possibly valuable bust come to be left in Rhu Village Hall?