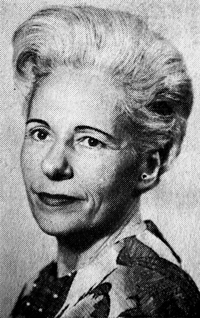 A HELENSBURGH woman devoted her life to the service of others in far off countries.

Nora Maxwell — known to all as Noreen so as not to clash with her mother’s name — was a senior information officer with the United Nations.

She grew up in Corbietree, Upper Sutherland Crescent, and was educated at St Bride’s (now Lomond) School, where she was a star on the sports field and leading contributor to the school magazine.

She was the daughter of Major David Aubrey Maxwell, who was in the insurance business in Glasgow until his death in 1929 at the age of 52, and his wife Nora, and she had a brother, Charles.

After leaving school Noreen acquired a taste for travel, although she always liked to return to the burgh for holidays.

She studied literature, history and art at the Sorbonne in Paris and at the universities in Rome, Perugia, Munich, Freiburg and Madrid.

After studying at university she set out to work her way round the world, and in 1939 she reached Tahiti in the South Seas.

She fell in love with the island and thought of settling there forever.

Noreen studied anthropology and the Tahitian language, but when the Second World War broke out she returned to Britain and volunteered for war service.

By then she spoke French, Spanish, Italian, German, Danish and Tahitian.

She was assigned to the Ministry of Information for several years on intelligence work, mainly abroad, then transferred to the Political Intelligence Department of the Foreign Office.

In this role she worked in Italy and North Africa, moving up the peninsula with the Eighth Army. She suffered a back injury which was to plague her for the rest of her life.

Having seen the horrors of war at first hand, when it was over she was determined to work for an organisation dedicated to the maintenance of peace.

So in 1948 she joined the newly formed United Nations, serving all over the world.

In the 1960s she became the first female head of a UN delegation and spent four years in a post of crucial importance to the whole southern hemisphere.

Based in Lima in Peru, South America, she handled UN information and social projects in the remote heights of the isolated country.

In September 1970 she became Director of the Information Centre for the United Nations in Morocco, based in Rabat, and that was where she was to spend the rest of her life — electing to stay there after her retirement.

Noreen was awarded the MBE in the Queen's Silver Jubilee Birthday Honours List in June 1977, shortly after she retired.

At the age of 84 she became a committed Christian, and she died in Rabat in November 2006 at the age of 94.

Jack Wald, pastor of the Rabat International Church, said of her: “She had an amazing life and the most amazing part of it was that she gave her life to Christ ten years ago.

“Noreen’s religious philosophy was thoroughly steeped in the values of the UN which were the trinity of diversity, tolerance and inclusion.”

Her mother made her home in New York, while brother Charles had a distinguished scholastic career in Britain, then went to Africa to take up a teaching and administrative post.