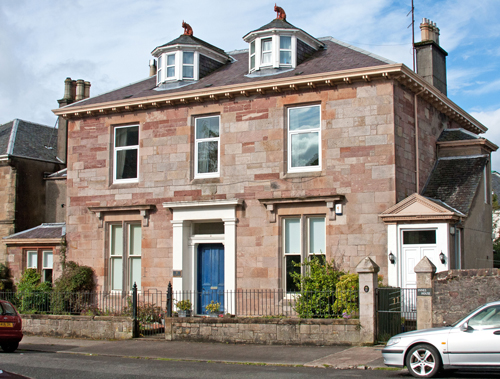 HELENSBURGH has been the home of many notable doctors over the years, but one has gone into local history for two quite different reasons.

Dr Fordyce Messer’s double claim to fame is that his coachman, coach and horse disappeared into the Gareloch, never to be seen again, and he is also responsible for the two ‘devils’ facing St Michael and All Angels Church in William Street.

A burgh medical colleague of Dr Messer described him as a well known figure with his finely flowing beard and vigorous walk.

“In the heyday of his career he was a bright star in the firmament and he enjoyed the confidence of a large clientele made up of all classes,” he wrote. “There is no doubt that Dr Messer possessed a highly magnetic personality.

“His manner was kindly and sympathetic as well as forcefully persuasive, rather than overbearing, and he had the power of instilling into the minds of his patients an essentially hopeful outlook.

“Such qualities of head and heart, reinforced by a complacent estimate of his own ability — a valuable asset — gained for him the unbounded confidence of a large following who indeed were mostly content to accept him at his own valuation.”

Thomas John Fordyce Messer was born in Portobello in 1841, the son of a farmer, studied at Edinburgh University, and began his career as a GP in Penicuik. About 1874 he moved to Helensburgh to succeed a Dr Skene who had just died, and moved into Craigellachie, 9 William Street, which he shared with his land steward son John. He speedily built up what was an important practice.

Local historian and Helensburgh Heritage Trust director Alistair McIntyre has researched the accident for which he is best known and which shaped the rest of his life. It happened on the evening of Monday November 22 1886.

Dr Messer had been asked to see a patient in Rosneath, and he was deposited at Rhu Point by his coachman, Andrew Carson, to be ferried across the Gareloch. The coachman was told to wait at Rhu Inn and come back at 10.30pm.

A local newspaper reported later that he went to Clifton Villa in the village, collected his brother and wife, and then went to Rhu Inn. After a drink, he took them home — where several people later testified he was sober — and went back to Rhu Point for 10.30. 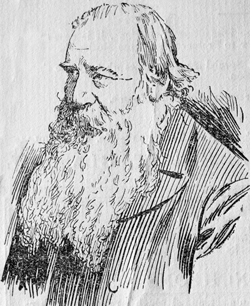 On the other side of Rhu Narrows, the ferryman and the Rosneath police constable noticed that the carriage lights suddenly went out, and heard a plunging sound.

The pair went across to the Point, saw no trace of coach or coachman, and assumed he had driven away. So they returned to Rosneath and collected Dr Messer, and he reached the same conclusion.

He walked into the village and made inquiries, but no-one had seen coach or coachman.

“Subsequent daylight examination of the scene of the disappearance showed by the tracks of the coach that it had apparently turned round several times well out on Rhu Spit, where the bank shelved away quickly into very deep water,” Alistair said.

All night and next day as many as 20 boats were engaged in dragging and searching the area, but with no result.

Fifteen years later the skeleton of a horse, with bits of harness still attached, was washed up on the shore at Blairvaddach, but no trace of Mr Carson was ever found.

Dr Messer’s colleague wrote later: “There were different solutions of the mystery propounded, the most likely being that the coachman had taken a seat inside the carriage for shelter and had fallen asleep.

“The horse had become bewildered by the rising tide which had gradually surrounded and overwhelmed him, sweeping him off his feet, and the weight of the carriage had gradually dragged him under, drowning man and horse.”

Because of the esteem in which he was held and sympathy for his loss, a collection was taken and the community subsequently presented him with a new horse and coach.

He was medical officer of the Burgh for many years, and in addition, was lodge doctor to the local lodge of Oddfellows for over 30 years, having succeeded Dr Gibb in that capacity.

An obituary in the Helensburgh and Gareloch Times reported: "He performed many remarkable operations, and not infrequently risked his own life in order to save the lives of his patients."

One special interest over many years was the Volunteer Movement. At Penicuik, he had joined the Midlothian Yeomanry, rising to become company sergeant-major. Soon after arriving in Helensburgh, he gained his commission.

This may originally have been as Lieutenant, but by 1873, he had become the Captain in charge of the Helensburgh battery, or company. This unit formed part of the Renfrew and Dumbarton Artillery Volunteers 1st Administrative Brigade, which was under the command of a Lieutenant Colonel. He rose to the rank of Major in the Helensburgh Company and was a popular officer greatly liked by his men.

He served for a number of years as a member of the School Board of the Parish of Row (Rhu) and was a strong advocate promoting higher education, and he lectured to various local organisations on topics such as geology and travel. 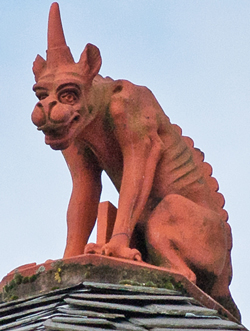 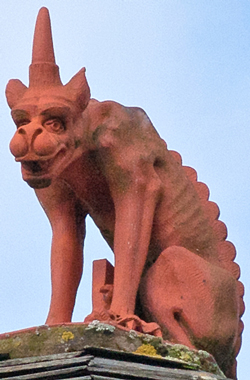 So it is perhaps surprising that Dr Messer almost certainly erected two grotesque red animal figures, when he called 'Mesopotamian Devils’ on the roof of Craigellachie which are there to this day, leering across the street at St Michael’s Church.

The story goes that the doctor fell out with the Rector of the Scottish Episcopalian Church, and had the two figures erected both as a provocative gesture and to match the church’s gargoyles. 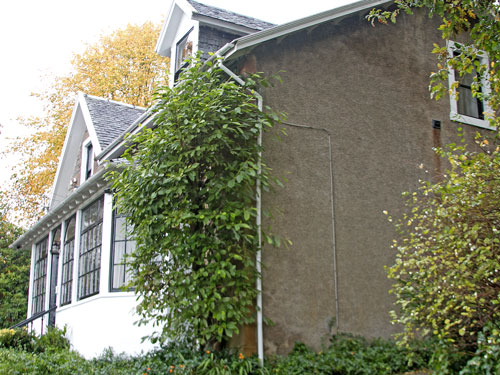 Ill health forced him to retire in 1905, and he moved to Woodlands in Garelochhead, having had to abandon his dream of visiting Canada. A testimonial was organised, and his popularity was so great that he was presented with an illuminated address, a purse of 200 £1 gold coins, and a gold bracelet.

After a few years and with his health failing he returned to Craigellachie, which he still owned, and he died there after a long illness in January 1911. He was interred at Portobello.

Dr Messer married two sisters. His first wife was Portobello excise officer’s daughter Jessie Jane Kedslie Smail, whom he married when she was 27 in a Church of Scotland ceremony in Glasgow in 1865. They had two sons and a daughter, John Fordyce Messer born 1865, George Kedzlie Messer born 1869 and Janet Messer born 1873.

She died in 1880 at the age of 41, a week after giving birth prematurely to another son who did not survive. He then married her younger sister, Jane Campbell Smail, and she died three months after him at the age of 69.

John Fordyce Messer, who was born on December 22 1865 in Penicuik, married Isabel Matilda, who was born in Manila in the Philippines in 1875. He died on February 20 1932 in Oak Bay, British Columbia, Canada.