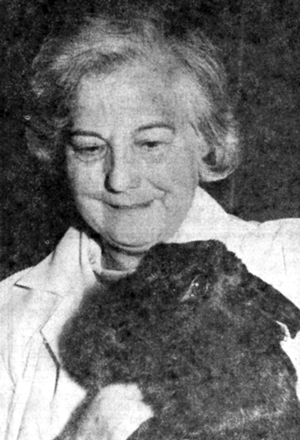 ONE of Helensburgh and district’s most remarkable and best known residents for many years died in September 2006 at the age of 90.

Meg Brown was a nurse for 40 years, a war heroine, a natural historian, a writer — and an international expert on rabbits.

But she was best known locally as the much respected matron of two town geriatric hospitals.

Meg was born in Marlage, Lanarkshire, on November 26 1915. After she left school she trained to be a nurse, and at the start of World War Two she became a Queen Alexandra Imperial Military Nurse.

She served in France, Africa and Italy, and on one occasion escaped unscathed when a ship she was travelling on was torpedoed.

She also spent time in an Italian prisoner of war camp, and watched as an angry mob hung the bodies of Benito Mussolini and his mistress, Clara Petacci, by their ankles in front of a petrol station in Milan the day after they had been shot.

She was awarded five medals for bravery, including the George IV Medal, and received a letter of commendation from the King for her war efforts.

The war over, Meg came to Helensburgh to serve as a Sister at Camis Eskan Geriatric Hospital, later becoming Assistant Matron and then Matron, living at the hospital.

In 1967 she also became matron of Braeholm in Helensburgh when it ceased to be a maternity hospital and also became a geriatric hospital.

Fulsome tributes were paid to her when she retired from both posts at the end of November 1975, and she went to live in Cardross where she became an active member of the village community.

Meg was a huge enthusiast of rabbits, and they played a large part in her life. She became one of the world’s leading authorities on the domestic rabbit, and was in demand to judge at shows all over the world.

The year after she retired, she travelled to South Africa to judge at a show in Pretoria, and was able to combine this with meeting her brother John for the first time in 18 years.

She was there to judge meat rabbits, and she said at the time: “Meat rabbits are big business in South Africa at the moment because other meats are so expensive there.”

She added: “I enjoy judging, especially at pet shows. I really love pet shows because you can never tell what you will be presented with. I was once asked to judge a jar of tadpoles!”

She introduced lop-eared rabbits to Britain and bred them and other varieties. She was responsible for the preservation of both the French and English Lop Rabbits in Britain, and, by breeding the two, evolved a new breed and strain.

She was presented with the Richardson Memorial Salver by the British Rabbit Council in recognition of her work, and another major honour was being made honorary president of the USSR Rabbit Association in the years before the iron curtain fell.

She also served on the board of directors for the European Association of Poultry, Pigeons and Rabbit Breeders for three decades.

Meg wrote a detailed directory of the 130 breeds of rabbits in the world, several other books — her last when she was 88 — and many articles.

She died after coping with a long illness, and her niece, Morag Keenan, paid this tribute: “'She was a truly amazing woman, a lady who lived life to the full. Even in the later stages of her illness, the force of her personality shone through.”