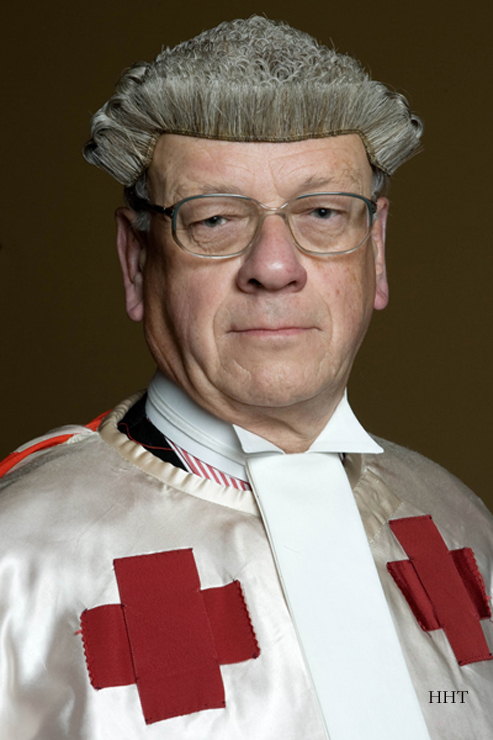 A HELENSBURGH man who was the longest serving judge of the current Scottish bench retired in May 2011.

It was the end of a highly distinguished legal career for 73 year-old Lord Osborne, born Kenneth Hilton Osborne in the burgh in 1937.

His father ran the local firm of T.Osborne, Carriers, and he was educated first at Larchfield School, a block away from the family home at High Dalglennan, James Street, and then at Edinburgh’s Merchiston Castle School.

His father died in 1952, and soon after he and is mother moved to Edinburgh, where he has lived ever since.

He studied at Edinburgh University, initially physics but changing to law after a year. He graduated M.A., LL.B., then joined the Faculty of Advocates in 1962. He was Standing Junior Counsel to the Ministry of Defence (Navy) from 1974-76.

In 1976 he became a Queen’s Counsel, and from 1982-4 served as an Advocate Depute, prosecuting cases on behalf of the Lord Advocate.

A variety of legal work followed, including serving on VAT and Medical Appeal Tribunals, the Disciplinary Committee of the Potato Marketing Board, and on the Lands Tribunal for Scotland from 1985-87.

In 1990 he was appointed a Judge of the Supreme Courts, becoming Lord Osborne, and also became chairman of the Local Government Boundary Commission for Scotland, a post he held for ten years.

He was appointed to the Inner House, the senior part of the Court of Session, the supreme civil court in Scotland, in 2001 and the same year joined the Privy Council, which advises the Queen and has some judicial functions.

During his 21 years of service as a Judge, Lord Osborne was involved in many historic rulings — none more important than the decision to reject the first appeal by the Lockerbie bomber, Abdelbaset Ali Mohmed al-Megrahi, at the Scottish court in the Netherlands.

He also won many plaudits for his handling of a succession of lengthy and complex legal arguments in the case of William Beggs, the ‘limbs-in-the-loch killer’ who dumped his victim’s limbs and torso in Loch Lomond.

One observer of the Scottish legal scene said of him: “His style on the bench was very individualistic.

“Many judges sit, poker-faced, absorbing the arguments and making the odd note as they wrestle, mentally, with the point at issue. Lord Osborne was one to debate, question, challenge and test the arguments of counsel on both sides, and would slump back with a face of tortured contortion as he tried to work out which way, in his opinion, the law lay.

“And it was always in his opinion. He was never one to go with the flow for the sake of it. He showed he could be of fiercely independent mind when he once refused to allow a retrial of two men on a murder charge, holding it would be against their human rights.

“The men's appeals against being convicted at their first trial had been delayed too long, he said, by the failure of the trial judge to produce reports on the case.

“It was seen as a brave judgment, criticising a colleague so heavily — not something he enjoyed, but he felt it was his duty in the circumstances.

“In the end, his ruling was overturned on appeal and the retrial took place, so he was far from infallible, not that he would ever have claimed to be.”

The Lord President, Lord Hamilton, paid this tribute: "As a senior judge he regularly chaired appeal courts, both civil and criminal, and was responsible for the preparation of many judgments of the first importance. His conduct on the bench was always exemplary.”

Lord Osborne married Clare Ann Lewis at St Giles Cathedral in Edinburgh in 1964, and they have a son and daughter. His interests include skiing, fishing, gardening, music and cooking, and he is a member of the New Club. The couple have a second home at Kirriemuir, Angus.

He retains his interest in the town of his birth, and is a member of Helensburgh Heritage Trust.

Trust president Professor Malcolm Baird, son of TV inventor John Logie Baird, has been a friend since childhood, and they first met at Larchfield School in the summer of 1947.

He said: "We also attended a Sunday School known as Young Crusaders, run by Craig Buchanan and Desmond Wright, at Dalmore House in the lower west end of the town. Desmond was a very earnest young man and we tended to mock him in the usual teenage fashion.

“Although no science was taught at Larchfield we shared common interests in chemistry and electronics. The chemistry experiments are best described as ‘stinks and bangs’.

“We got our ingredients from Brown the chemist across from the Post Office and from C.G.Reid the ironmongers on Sinclair Street.

“Kenneth was particularly interested in electronics. We often experimented with microphones and earphones, and then he took up radio set construction in a serious way.

“I remember the care that he took on the proper mounting of  valves, transformers etc. on an aluminium chassis. He was skilled in the use of a soldering iron.

“The components needed were bought by mail-order, or obtained by cannibalising defunct radio sets we acquired at no cost from Manderson’s radio shop on East Clyde Street.

"We kept in touch for many years and our paths crossed again in 1963-67 when I was on the staff of the Edinburgh University chemical engineering department. He was starting to make his way in the legal profession, while I carried on with my chemical interest but at a higher level than 'stinks and bangs'.

“Over many years we have kept in contact and I have followed his excellent career with the greatest interest. It is unusual for a judge to have a scientific background and I hope that this has been more of a help than a hindrance."