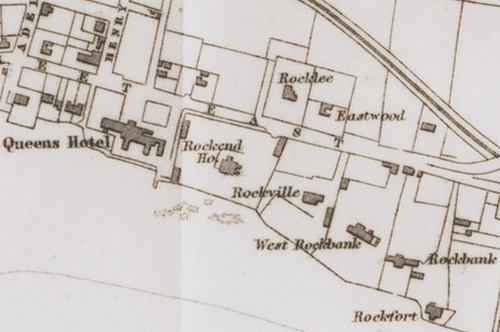 AN Australian’s search for where a celebrated ancestor was buried led him to Helensburgh.

John McClean believes the last resting place of Hugh MacLean, the 16th and last Laird of the island of Coll, may be one of the local cemeteries.

He was descended from John Garbh Maclean, the 7th Laird of Coll, and further back from John Gilliemore who settled in Mull about 1330. Later the family owned Mull, Tiree and Coll.

Hugh MacLean was born in Aberdeen in 1783, the eldest son of Alexander MacLean of Coll and his wife Catherine, who had a townhouse which still exists at 81 High Street, Old Aberdeen.

Educated at Eton, Hugh joined the 3rd Regiment of Guards (Scots) and rose to Lieutenant Colonel before resigning in 1809, in order to help his father run the family estate.

He was Laird of Coll from 1828-56 when he was forced to sell the island to pay for his extravagant lifestyle.

During his time as Laird of the 13-mile long Hebridean island four miles from Mull he was involved in two major issues  — religion and the pier.

When the Great Disruption of 1843 took place in the Church of Scotland, Coll and Tiree were a joint parish.

Although rarely resident in the island as he preferred his homes in Aberdeen and London, Hugh took exception to statements made by some firebrands in the Free Church and refused the Coll people a site for a church of their own.

According to an article published in the Coll Magazine, he attempted to imitate the measures taken by an ancestor, referred to as the wielder of the Yellow Stick. He sent word to the Coll people that on a certain Sabbath he would present them with a minister in whom he had confidence.

On the appointed day he stationed himself and his chosen man beside the Established Church and spoke to the people as they approached, remonstrating and reasoning with them.

Respectfully but firmly they refused to comply with his wishes, declaring that their consciences were their own and that they could not surrender their convictions. They streamed past him to join the Rev Archibald Nicol, the island’s minister, in an open-air service since the church was denied to them.

Hugh remained firm about providing a site but did allow the people the use of the Parish Church except when it was otherwise required, which was rarely. The Deacons' Court Minutes of the Free Church show that they had the use of Clabach Church from 1855 to 1857.

The pier issue also was vital to the islanders. The old pier was built at the time of the potato famine, which ravaged the Highlands and Islands as it did Ireland in the late 1840s. When the potato blight struck in 1846 the effect was devastating as the potato had become the staple for the bulk of the population.

Famine prevailed, and to help relieve the resulting destitution, the government and private charity sent grain to the affected areas in exchange for work on roads and piers. Coll badly needed a new pier.

On February 14 1848 the Secretary of the Fisheries Board informed Hugh that the government's authority for proceeding with the pier had been received. He added: “ I am inclined to think there can be no objection to going on with this work this season, so soon as the weather will admit of it.”

The estimated cost was £300, of which Hugh had to find half, and the Secretary emphasised the importance of his contribution.

“So soon as I am informed that the above sum has been lodged in the Royal Bank in my name in the account opened there for aiding in the relief of destitution in the Highlands by the improvement of creeks and havens, I shall immediately take steps for carrying on the work,” he wrote.

But Hugh could not pay his share, and the estate was in trust, so he turned to the Committee of Destitution for help.

In April 1848, the Committee's inspector, Dr Boyter, reported from Tobermory that he had recently been to Coll, where he had seen a large supply of meal landed at the east end, and heard that Mr Maclean intended laying before the Board the estimates and plan of a pier which, as an accommodation for fishers, would be most serviceable.

He continued: “When I mention that there are 108 families who have neither land nor means of living, I conceive that employment at this pier would be the most serviceable way of employing their time. I therefore most earnestly recommend Mr MacLean of Coll's claim for some pecuniary assistance in the erection of this pier.”

But nothing happened, and in his report for 1849 to the Committee of Destitution, Dr Boyter again pointed out the lack of a good quay or landing place at Arinagour, adding that Mr MacLean, although always generous in the past, had no more capital and could not produce the finance for the pier.

This time he was successful. After two years, the Committee of Destitution decided that the pier was a worthy cause. Full funding was approved, and the pier was built.

John McClean’s early research suggested that Hugh lived his final years in London and died there. However he has since discovered that he died on August 3 1861 at Rockville, East Clyde Street, the home of his eldest daughter Margaret Hamilton Dundas.

The 1861 Census entry for Rockville lists Margaret as the householder, Hugh and his second wife Jane, Elizabeth Griffith who was Hugh’s third daughter, and Jane Albane MacLean, his youngest daughter who also married a Hamilton Dundas.

Mr McClean said: “I have a strong suspicion that Hugh may be buried in the Helensburgh area, as there would undoubtedly have been reports if his body had been returned to the Coll or Mull estates, or indeed to Aberdeen. I would welcome any more information.”

The illustration showing Rockville and the area from Henry Bell Street to the Craigendoran bridge is from an 1860s map of the town.