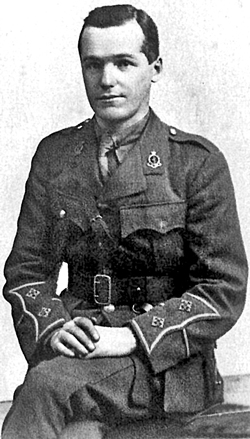 THE colourful life of a Kilcreggan-born doctor included active service in World War One — and later being a member of the ringside team of a world boxing champion.

John Cameron was born on December 8 1881 at Prince’s Terrace, the second son of master plumber and later Cove and Kilcreggan Town Council member and JP Alexander Cameron, and his wife Elizabeth McFie.

Like his older brother and sister and his three younger sisters, John was educated at Kilcreggan Primary School and then made the daily boat trip to attend Hermitage School in Helensburgh.

He left school in 1898, went to London where he got a clerical job, but returned in 1901 to study medicine at Glasgow University.

It is recorded that he took some time to master surgery, but he eventually graduated in 1909.

He worked as a locum in various places, but in 1911 married Jessie Dryburgh, from Dennistoun, and they moved to London where their daughter Betty was born.

In 1915 Jessie died, and that December John was commissioned in the Royal Army Medical Corps attached to the 38th Brigade, Royal Garrison Artillery. A month later he was setting off for Africa with the East African Expeditionary Force.

Later that year he was transferred to the King’s Africa Rifles, who were involved in fighting the Germans in East Africa. However he contracted Blackwater Fever and was lucky to survive.

In December 1916 he was promoted to Captain, and a year later he returned to Britain on a hospital ship.

From May 1918 he was attached to 74 General Hospital, British Expeditionary Force, at Trouville in Normandy until November when he was involved in the advance into Belgium.

Soon after, while on leave in Glasgow, he had a whirlwind romance with a friend of his brother Alick, Annie Jackson, and they married in the city the following spring. They had two daughters, Moira and Florence.

Alick had been a pre-war Territorial with the Glasgow Highlanders and had enlisted in the army in August 1914. A Post Office worker by occupation, and a skilled Signaller, he was initially attached to the 1st line of the Lowland Division.

Later he was transferred to the Manchester Infantry Brigade, with whom he won the Military Cross.

After the war John set up in general practice in London’s Paddington area. But Glasgow called again and in 1924 he opened a surgery in Anderston, later moving to Old Dumbarton Road.

Five years later John, Annie, and their family returned to the London area, and he ran a medical practice in South Woodford, Essex, for eight years.

His final move was in 1937 to a home at surgery in Uddingston, where he lived and practiced until his death in 1955 at the age of 73.

He was a sports enthusiast. He thoroughly enjoyed playing golf, and he was a football administrator serving as both president of Thorniewood United, a junior club, and on the Lanarkshire Junior Football Association of which he became a life member.

Boxing was another passion, and he was a valuable member of the backup team for world flyweight champion Jackie Paterson from Springside, a village three miles from Irvine in Ayrshire, who won the title in Glasgow in 1943.

When he retired from fighting he had earned an estimated £100,000, but he had lost most of that betting on greyhounds. He died in 1966 when he was knifed in a street fight outside a pub in Amanzimtoti, Natal, in South Africa, where he had gone to live.

Dr Cameron was, not surprisingly, a popular and much respected figure in the Uddingston area, and an obituary in the Bellshill Speaker said of him: “As a Scot he was intensely proud of his race and its best traditions.

“Perhaps the greatest compliment one could pay his memory would be to say that he was by nature and instinct a true Cameron — forthright in his views, frank in his opinions, sincere and constant in his loyalties.

“A man of strong personality, he made his presence felt in the district, and very soon earned for himself the confidence and trust which the family doctor traditionally holds in the life of the community.”

He was survived by his wife and three daughters.