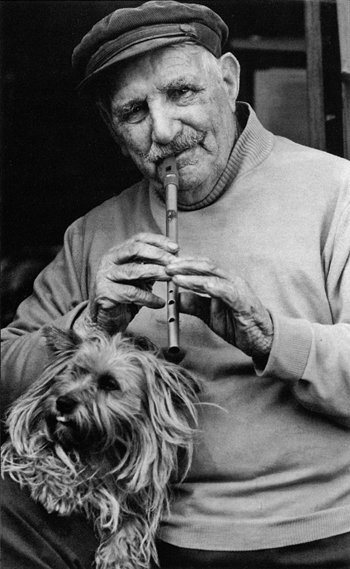 ONE of the last and most famous of the older generation of Scottish travelling people was born in Helensburgh in 1910.

Willie MacPhee was born when his mother and father were doing casual farm work around the town, planting the potato crop. Both his parents were natives of West Dunbartonshire and belonged to one of the biggest of the travelling clans, found all over the west of Scotland.

His father Andrew died when Willie was only eleven, and, as the eldest son, he became what he called ‘bodyguard' to his mother, who was a member of the Cameron family. He also started learning to play the pipes.

He grew up to be a piper, story-teller and singer. He owned very little and never lived in a house, but he was rich in traditional culture, music, song and piping.

He never learned to read and write, but he was intelligent, articulate, imaginative, and very interested and well informed about current affairs. He also loved going to the theatre.

Willie travelled with his family and Alec Stewart, his lifelong friend and fellow piper by loch and glen, all over Scotland and Ireland and learned all the traveller's skills, like tinsmithing, basket-making, piping, and, in Willie's case, blacksmithing, earning him the nickname of ‘The Blacksmith'.

Together, in full highland dress, they played the pipes for tourists at Glencoe and Loch Lochy for many years, and it was often lucrative. He also sang unaccompanied in a high, lyrical voice.

All his life, Willie loved ceilidhs with his family and friends and retained in his memory all the stories he had learned around the camp fire or in tent or trailer, however complicated they were. He was a master storyteller.

He learned by listening and, not only did he develop his own way of telling them, always intimate and entertaining, he also understood their inner meaning — not by analysing them as a scholar might, but by some inborn intuitive wisdom that he inherited from the past.

Thus, says his biographer, Perthshire teacher, author and folk enthusiast Sheila Douglas, he provided a link between the ancient history of his people and their situation in present day Scotland, for he personally experienced many of the changes which affected their lives.

He saw the change from working on farms and with horses to selling secondhand cars, and became a good mechanic himself — so much so that he acquired a reputation as a magician with car engines.

He walked over hills in his bare feet, he worked on new roads with Irish navvies, he had a good right hook and never lost a fight, he made himself a practice chanter out of a hollow stem and a straw.

He also knew what it was to be constantly moved on and fined for illegal camping through laws that made him a criminal for following his traditional way of life.

He went from grafting hard for every penny and improvising what he could not afford to buy, to being helped to subsist by the Welfare State.

After the Scottish Folk Revival of the 1960s, Willie attended many clubs and festivals, but shunned the limelight, never competed, and sang and told stories in ceilidhs and sessions. Yet there was such charisma about him that he became known across the whole country.

Despite that recognition, he was just doing what all his forebears had done around the fireside.

His first marriage was to his cousin Mary in the 1930s, and they had five children — both of his sons dying at an early age.

After Mary's early death he had a restless period until 1963 before settling down with and marrying a widow, Bella, whose husband, also Willie MacPhee, had died from a serious head wound sustained while doing seasonal farm work after the Second World War. She had a family, whom Willie brought up as his own.

They mostly lived in Perthshire, and when the Doubledykes caravan site for travellers was set up by the local council on the outskirts of Perth, they secured a stance, around which Bella planted a garden. 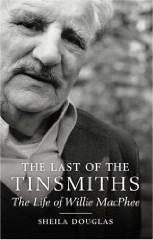 Speaking as an old man, Willie said: "I don't have a notion of being inside a house . . . I've always been in a van or a tent and I couldn't change even at my age."

But in January 1993 they and others on the site lost their trailers and almost all their possessions in the famous floods — although a young lad dived in and rescued Willie's pipes, his most prized possession.

Sheila Douglas writes of the wisdom of Willie MacPhee, and she added: "He was one of the strongest links we have had with the culture we have neglected and almost lost."

In his 80s he continued to play the pipes in public until he was unable to leave his caravan. In his last years he was often a patient at Perth Royal Infirmary.

He died in November 2001 at the age of 92 and was buried at Kilmaronock Church, Gartocharn — in sight of his beloved Loch Lomond — after a funeral which attracted a huge congregation, far more than the church could hold. Bella survived him for several years.

Much of his repertoire was recorded by the School of Scottish Studies, and his work was also recorded by singer/songwriters Ewan MacColl and Peggy Seeger. He was also a founder member of the Scottish Storytelling Forum based at the Netherbow Arts Centre in Edinburgh.