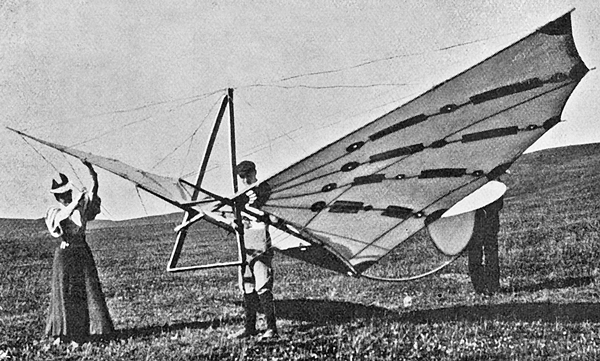 SATURDAY January 16 2010 was the 144th anniversary of the birth of aviation pioneer Percy Sinclair Pilcher, whose early experiments in gliding were undertaken in fields at Cardross.

Percy used the fields of the thriving Wallacetown and Auchensail Farms for his experiments with three different gliders between 1893 and 1896.

He could well have become the first person to achieve controlled, powered, heavier-than-air flight well before the Wright brothers, had he not been tragically killed in a glider accident.

His story is told on this website in an article entitled ‘A pioneer of flight', but recently a much older article about him came to light.

It appeared on September 28 1895 in the UK weekly newspaper The Black and White: A Weekly Illustrated Record and Review, headlined ‘New Flying Machine', and included photographs Percy had provided.

“OUR readers will recollect that we devoted some attention in the past to Herr Lilienthal of Berlin and his experiments in soaring.

Now it is Mr Percy S.Pilcher, Lecturer on Marine Engineering at Glasgow University, who, basing his inventions upon that of Herr Lilienthal, has produced two winged creations, and by their aid has taken sundry flights in mid-air.

At times he has risen to an altitude of twenty feet, occasionally hovering kite-like for a space and then descended on the spot he left; while, upon other trials, he has hastened before the breeze for considerable distances ere regaining his feet.

Mr Pilcher's machines are light structures of wood and steel supporting a vast spread of wing and braced with piano wire.

The wings themselves which are made of nainsook — a sort of muslin originally manufactured in India — have an area of one hundred and fifty square feet; and each machine, as our pictures indicate, possesses a vertical and horizontal rudder of circular shape, the one cutting the other at right angles.

The former, which is rigid, serves to keep the machine's head to the wind, while the latter arrests an inclination to pitch sideways — a common vice in all like inventions.

The great difficult with winged aeronauts is the uncertain quality of the wind, for a steady, unvarying breeze is never to be calculated upon. Indeed the sudden, unexpected side-puff often brought disaster in its train to Mr Pilcher until he hit upon a means of circumventing it.

He now draws his wing-tips in with a bend, which renders a flying machine safer and more stable.

Speaking generally these experiments in flying or soaring are being made with a view to master the art of aerial balance and safe landing.

Then, when the golden era dawns, when a screw propeller or flapping wings are introduced, and a power discovered to work them, gentlemen like Messrs Lilienthal and Pilcher will spring gaily aloft to emulate the carrier or tumbler pigeon, and put a girdle round the earth in a morning.

May the necessary discovery of a new power be speedily made.

Meantime Mr Pilcher, on a fresh pair of wings with a sail area of no less than three hundred feet, pursues his plucky experiments at Cardross in Dunbartonshire before numerous admirers.”

These are three of the pictures of Percy and his sister with the Bat glider at Cardross which he supplied to the newspaper.