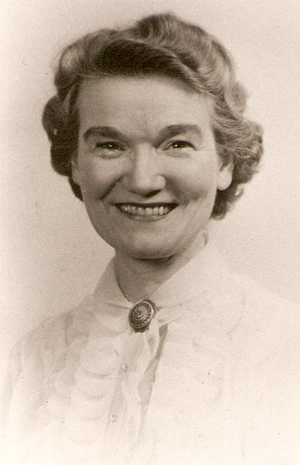 Alistair Quinlan has supplied the story of Margaret, who was his great aunt and the sister of William Orr, a civil engineer in the Helensburgh Burgh Surveyor's Office and later Deputy County Surveyor for Argyll.

Born at the family’s Garelochside home on March 21 1898, she was educated in Helensburgh and as a young woman worked first for the Gas Company in the office and cycling around the town to read gas meters, and then for a time in the Burgh Chamberlain’s office at the Municipal Buildings.

In 1922 at a fancy dress Ball at the Victoria Halls, Margaret was approached by a young man from Lamlash on the island of Arran who at the time was working in a Clyde Street bank. His name was Cameron Allan and he had gone to the Ball dressed as a North American Indian.

He had also invited another partner to the Ball but on spotting the redhead he had seen cycling past the bank, he left his partner in the care of his brother and subsequently filled Margaret’s card for the whole of the evening.

Alistair says: “It was only a few weeks before Cameron, his mother and siblings were due to emigrate to the United States, but what was he to do about Margaret? He apparently asked her father, James Orr, for his permission to marry her — but not yet!

“It was on the basis that he would become established in the USA and then Margaret would follow. James gave his blessing, and she must have agreed to this arrangement too. Cameron subsequently sent her an engagement ring from the USA, which her father put on her finger.”

Margaret (pictured below left in 1949) left Helensburgh on St Valentine's Day 1925 on the Anchor Line ship Cameronia, bound for New York, not joining the ship at Glasgow like all the other passengers.

Instead, thanks to a friend, the ship’s tender collected her from Helensburgh Pier — and she later recalled: “The whole town had gathered to see me off.” 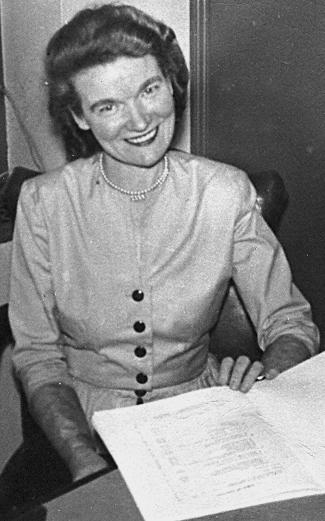 When she arrived in New York on February 22 she left the ship to join her husband-to-be and his family.

A newspaper article the next day recorded that there were 16 ‘Scotch’ brides-to-be on the ship and as the 22nd was George Washington's birthday and thus a public holiday, they could not be married and so were kept in an hotel.

Margaret and Cameron married several days later in New York, where they set up home, and had three children, all registered as British citizens, before Cameron died suddenly in late 1937.

The Allan family rallied round and helped, but despite being from a background which believed that a mother’s only employment should be in the home, Margaret was determined to keep her family together and to provide for them.

She found her first job in the Christmas rush of 1939 working for the Reader’s Digest, followed soon after by a position with the British Purchasing Commission in Manhattan.

Then, when the United States entered World War Two she went to work for Sir William Stephenson, known as ‘Intrepid’, in Documents in British Security at the Rockefeller Center, later becoming Head of Documents.

“She recounted that she’d often turn up for work on a Monday morning to find that the office walls had been ‘rearranged’ over the weekend,” Alistair said. “Although her duties could not be described as front line, she did once offer a tip-off which resulted in a spy being caught.

“She and her co-workers were instructed not to recognise or greet one another if they met on the street. Her children, still quite young, were not sure what their mother did — but despite that they were told not to talk about where she worked.” 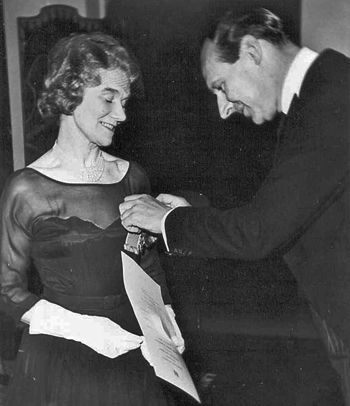 During this period she developed a unique secret filing system, which even years later was recognised by Margaret Thatcher, then British Prime Minister.

At the end of the war she joined the British Mission to the newly formed United Nations, again as Head of Documents, and served in this post until she retired.

As many African nations joined the UN, she trained their employees in the systems they needed to become familiar with, including one which she had designed to keep track of speeches at the UN.

Awarded the MBE for her service to the British Government in the 1963 birthday honours, she was invested with the medal at the annual Queen’s Garden Party in the grounds of the British Embassy in Washington DC by the then Ambassador, Sir Richard Ormsby-Gore (right).

She died in New Rochelle Hospital, New York, on November 19, 1982 after a short illness. The funeral service was held in Eastchester Presbyterian Church where she had been ordained as one of their first women elders.