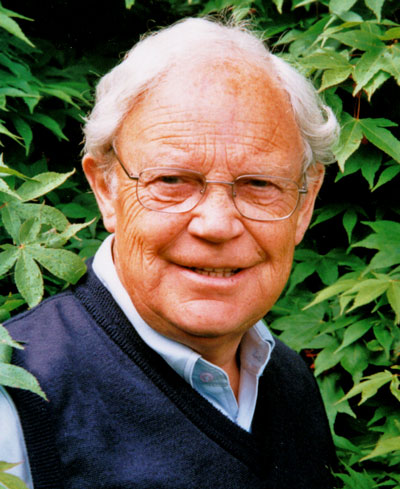 THE son of a Helensburgh parks superintendent grew up to become the best known face in Scottish horticulture.

Gardening expert James H.McColl, MBE, known to all as Jim, was the long-serving presenter of the BBC TV series The Beechgrove Garden — but retired from the TV potting shed in April 2019.

His father Tom was in charge of Helensburgh Town Council’s parks department from 1954, living in the converted Air Raid Post building at the top of Hermitage Park, and later moving to the little cedar bungalow at the entrance to the park.

Jim was born in Kilmarnock, Ayrshire, and the family moved when Tom took up the town appointment late in 1954. Highly regarded locally, he went on to serve as chairman of Helensburgh and Gareloch Horticultural Society from 1955-73.

“For two years I was a winter 'lodger' with my parents as I commuted daily to Glasgow. The other half of each year was spent at Auchincruive when I was only home at weekends.

“We were members of St Columba Kirk when the minister was the Rev Alex Ritchie. I sang in the choir and helped with the Sunday School when the superintendent was Willie Mickel.

“I joined the Bible Class at the Old Kirk, consorting with people like Bryan Drever and Douglas Lamb.

“The second winter, I joined the Amateur Choral and Dramatic Society as a chorus member, when the musical director was Jae Gardiner. It was a privilege to know Jae and her husband George, if only for a short time.”

Gardening was a common interest in the McColl family, and it was no surprise that Jim followed in the footsteps of his dad (left).

“My father was a gardener all his working life, and, as you will find if you ask most professionals, he gardened in his spare time too,” Jim says.

“Guess where I worked during summer holidays from school? Actually it was either my Aunt Mary’s market garden or on a rose production nursery run by a friend of my dad.

“I didn’t have much option really. For a start, it was going to be an outdoor occupation and I suppose these early influences relating to the cultivation of plants, the infinite variability of the seasons, seedtime and harvest and all that jazz, had a great appeal.”

After Jim's formal training, when he gained the Scottish and National Diplomas in horticulture, he took up a post at the college at Auchincruive.

In 1974 he also took charge of the Horticultural Research and Development Unit at Craibstone, and four years later he joined Stanley P.Morrison at their Glengarioch Distillery in Oldmeldrum, near Aberdeen, to manage their pioneering waste energy project.

After returning from England he began contributing on a regular basis to a range of radio programmes on BBC Scotland, notably The Scottish Garden, and in 1978 he was invited to co-present The Beechgrove Garden with George Barron.

The company name was changed to Morrison Bowmore Distillers, and Jim was invited to move to their HQ in Glasgow to set up a PR and Customer Relations Division. He took early retirement in 1996.

The early work by Jim and George Barron to start the new TV gardening programme for BBC Scotland helped The Beechgrove Garden to become one of the most popular and long running series for Scottish viewers.

In 2007 he won the Best Nations and Regions Presenter title at the Royal Television Society Programme Awards, and he received the award at a star-studded ceremony at Grosvenor House in London.

In 2008 he was an unsuccessful BAFTA Scotland nominee for Most Popular Scottish Presenter. Also nominated unsuccessfully in this category was sports presenter Hazel Irvine from Cardross.

“I always say I’m a professional gardener and an amateur television presenter, although this is getting harder to justify now that the programme is in its 30th year,” he said in 2008.

"Programme-making isn't for everyone. You have to be able to cope with the rhythm, this business of doing the job in wee bits and pieces, then waiting around for the camera to get ready.

“I'm happy to wander off and do a wee bit of weeding or pruning, pot a few plants. It's all about teamwork — when I go out with a cameraman and someone speaks to us, the camera crew laugh along too — they're part of it.

“We don't grab headlines, but we're doing a job which we know is appreciated and we're happy to be part of the scene. It doesn't seem like 30 years, except when I look at my face in the mirror in the morning. My wife says I shouldn't let them do close-ups!”

Jim has been a member of many societies and boards, including being a member of the first Board of Trustees of the Royal Botanic Garden in Edinburgh and a past convenor of the National Farmers Union of Scotland glasshouse and nursery committee.

He was the first chairman of the annual Scotgrow Exhibition and Conference, a Council member of the National Trust for Scotland and member of their gardens advisory committee, and vice-chairman of the Board of the Todhill Country Centre, a charity for the care of adults with learning difficulties in Ayrshire.

He says: “It's a great business to be in, gardening and horticulture. It's a universal thing that everyone wants to come home to a nice garden. I get a real buzz from sharing information and my expertise with other people. And in return, their enthusiasm carries us along.

“You can get a knock back in gardening when the weather is terrible, but then you can't wait till the next year so you can get back at it. Gardeners are a great bunch, they're the sanest folk on earth!

“In recent times, with others, I have been spearheading a project to create a National Garden for the people of Scotland along the lines of the RHS gardens in England. The project is now called ‘The Calyx’.

“Since 2000 I have served on the board of Gardening Scotland, the three-day horticultural extravaganza held at the end of May each year at the Royal Highland Showground at Ingliston, near Edinburgh. I am currently chairman.”

Jim married his wife Billie in 1959. They live in Kemnay, near Aberdeen, and they have a son Douglas and a daughter Jennifer — whose son is called Ben and shares the same birthday as grandpa Jim.

He has many other interests, having played football, rugby and golf, and nowadays he devotes much of his time to playing in and compering musical events.

“I am a junkie for Scottish music and for the last 15 years, I have been compere for the Scottish Fiddle Orchestra concerts at home and abroad,” he says.

“In our younger days, my wife and I were very keen Scottish country dancers. I suppose it all started eons ago when every Saturday, after watching the football with dad, we would come home for high tea and settle down to listen for the strains of 'Kate Dalrymple' heralding Scottish country dance music on the Home Service.

“About that time, I started to learn to play the piano, and when I finally left home, realising that I couldn’t take the instrument with me, I bought a piano accordion and I have footered with that ever since — it’s a bit like my golf, I know what I am supposed to do but don’t always get it right!

“Being a member of my local Rotary Club, I do get an opportunity to join in many of their activities, especially serving the local community. In particular, a group of us visit local care homes to entertain the residents.

“Our fame has grown to such an extent that we are being invited to ‘perform’ for other groups and clubs in the locality. Sometimes, we receive a donation, which is channelled into the Rotary Foundation international charity.”

At the age of 83 Jim reluctantly retired from Beechgrove, citing neuropathy in his hands and movement difficulties.

He told co-presenter for 36 years Carole Baxter: “Beechgrove is half my life. I just want to grow old in private, but I will still garden.”

Producer Gwyneth Hardy said: “It was the end of an era for Jim to be handing over the trowel.

“It was a big decision, not taken lightly, for Jim as he is genuinely passionate about communicating his knowledge of gardening.”

Jim was also a regular guest on BBC Radio Scotland’s The Beechgrove Potting Shed with Frieda Morrison. His sister Marion lives in Alexandria.