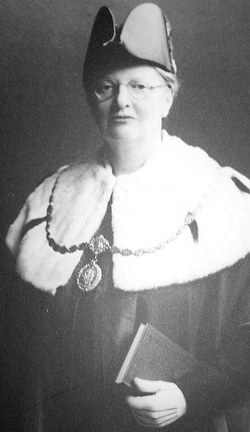 ONE of Helensburgh’s best known residents of the 20th century who donated the Templeton Library to the town, Nance Anderson, died on January 13 1980 at the age of 90.

Miss Anderson was the daughter of silk throwster William Anderson, Provost of Helensburgh from 1898-1902, and Annie Templeton, of the Templeton carpets family, and was born at Dalfruin, Helensburgh, on November 9 1889.

She had two sisters, Mary and Frank, and two brothers, John and Kenneth. The family moved to Inistore, a William Leiper-designed house at 76 John Street, which was later renamed Glen Kin.

It was the Templeton family home Drumgarve, a block lower and on the other side of John Street, which she and her brothers and sisters donated to the town in 1946 to become the Templeton Library, and it opened to the public in 1950. It eventually closed in 1998.

Nance lived in Helensburgh all her life. When her parents died in 1928 she and her brother John moved to 58 James Street, which she renamed Inistore. She is reputed to have been the first person in the town to instal a gas central heating system there.

She was educated at St Bride’s School, and after reading geography at Oxford University for two years — before the days when women were allowed to take degrees — and after Froebel teacher training at Bedford she returned to teach at St Bride’s for a time.

Miss Anderson took a great interest in local history and all other aspects of town life. She was active in many town clubs and societies, and served on the former Helensburgh Town Council. Co-opted to membership in 1939, she was made the first woman Bailie (magistrate) three years later.

Among her many achievements, Miss Anderson was a leading figure in the local Woman’s Voluntary Service for Civil Defence, becoming a centre leader in charge of the local branch in 1939.

She drove a large WVS mobile canteen into the Clydebank area during the 1941 blitz, taking light meals to bombed out people and to the Civil Defence services. At the height of the blitz she visited many shelters and helped to keep up the spirits of the people by starting community singingt and by entertaining them with her skill as a whistler.

Later that year she received the MBE for services to the WVS.

She was the founder, first producer and president of Helensburgh Amateur Dramatic Society — forerunner of the Theatre Arts Club — in the 1920s and 30s and her casts included poets W.H.Auden and C.Day Lewis.

She served as honorary president of Helensburgh Art Club and had one of the finest collections of paintings of old Helensburgh, including some by the famous Glasgow Boys. She also had a particular interest in maps. 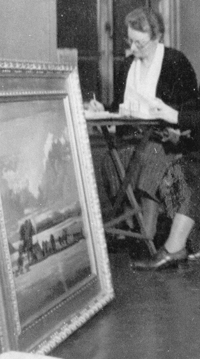 In 1921 she formed the town’s first Brownie Pack for younger girls, naming them the 2nd Helensburgh Brownie Pack in recognition of the earlier Girl Guide company which existed during World War One, and thereafter took an active part in the local Girl Guide movement.

She was a staunch member of St Columba Parish Church, which she joined in 1907.

In addition to presenting the town with the Templeton Library, Miss Anderson also donated the houses surrounding it, the Anderson Trust houses at Drumgarve Court set up for single or widowed ladies from the town.

Miss Anderson was survived by two nephews, neither of whom lived locally. The funeral at Cardross Crematorium was conducted by St Columba minister the Rev Andrew Mitchell.

In an obituary for the Lomond School magazine of 1980, former headmistress Miss Rachel Drever Smith wrote: "She loved Helensburgh, and she knew it in a way peculiar to herself and to her upbringing.

"You could see this in her house, in the pictures of Helensburgh by fine artists, discriminatingly collected and lovingly displayed, in her magnificent collection of maps, many of them of the district, and in the books on local history.

"She was always generous, and not only in material ways. She enjoyed acquiring and experiencing new things, and fitting them into her scheme of life — not only long-playing records as soon as they came out, but also things like dishwashers.

"I suppose this was the characteristic which led her in her earlier days to acquire her own yacht, Manora, and cruise in it all through the Western Isles and up the west coast."

Miss Anderson bequeathed her superb art collection to the town, and it is administered by the Anderson Trust which is chaired by her nephew William Anderson. The Trust has added to the collection, and each year puts on an exhibition in the new Helensburgh Library in West King Street.