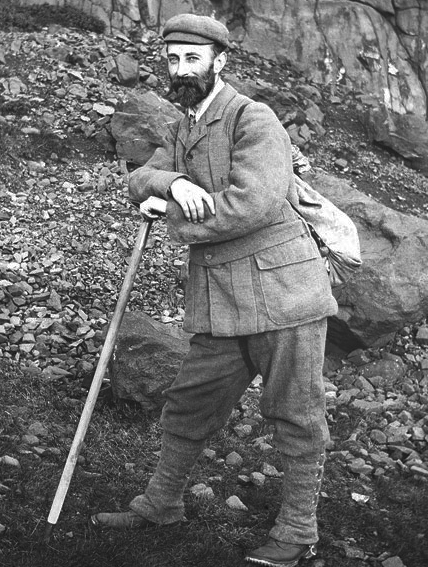 Archie Robertson was born in the town on July 3 1870 and brought up at Parkhill, 7 Kings Crescent, which is now Barbreck, 1 Granville Street.

He and his two brothers attended Miss L.Nichol’s Ladies School, a boarding school at Kintyre Villa, Charlotte Street. However by the 1881 Census only he remained, as his father had died shortly beforehand and his two brothers were no longer recorded as living in Scotland.

His mother was in Glasgow, and he went on to be educated at Glasgow Academy and Glasgow University, where he obtained his MA degree in Natural Philosophy (Mathematics and Physics) under Professor Sir William Thompson, later to become Lord Kelvin.

Although Archie had climbed Ben Cruachan with some friends in 1889, it was nearly a year before he became a devoted mountaineer after his ascent of Glencoe’s Bidean nam Bian in company with experts.

“This day showed me the delights of scientific mountaineering — the use of maps, aneroid, compass, etc. — and ever since that day I have steadily pursued the Quest,” he wrote.

Four years later he began his first walking and climbing tour, well equipped even to his aneroid barometer-cum-altimeter obtained for him by his former professor, Lord Kelvin.

The instrument was especially suited for checking the heights of Scottish Bens, and this heirloom is to this day handed to each new president of the Scottish Mountaineering Club — which he joined at the end of that year.

From the club’s inception in 1889 there had been debate as to how many mountains there actually were in Scotland.

Hugh T.Munro, an Alpinist, was entrusted with the task of compiling a list of Scottish mountains of 3,000 feet (914.4 metres) or igher, but went a step further, that of identifying those he judged to be separate mountains and those which he regarded as subsidiary tops, using arcane criteria of dip, distance and difficulty.

He used one inch and six inch to the mile Ordnance Maps of 1870 vintage, much inferior to those available nowadays, so it was an immense task, completed in 1891 with the publication of Munro’s Tables.

These listed 538 tops of 3,000 feet or higher, of which there stood out 283 he had classified as being separate mountains.

Archie coined the name ‘Munro’ for these, but although he climbed extensively, sometimes during SMC meets, it was to be several years before he developed an ambition to climb them all, but not necessarily climb the subsidiary tops as well.

Munro, on the other hand, eager to check the validity of his tables, steadily visited all but three of his 538 tops until first illness, then death, sadly intervened — but not before he became Sir Hugh T.Munro, a hereditary baronet.

In 1892 Archie began to study divinity at New College in Edinburgh, and he graduated in 1896. By 1898, having climbed a large proportion of the Munros, he realised that by sustaining his efforts it might be possible to complete — or ’bag’ — the lot, within two or three years.

Despite the absence of tarmacadam roads there were some advantages in those days: shepherds’ and keepers’ cottages on tracks leading into the hills; hirings of pony and trap; lifts on mail carts; passengers on goods trains; rowing boats saving long detours; but most importantly the readiness of the cottagers to put him up, where there was great mutual respect.

At a later stage he used a bicycle when it was advantageous. He mostly climbed solo, but sometimes had companions, including his cousin Kate McFarlan whom he married in 1900.

In 1901, accompanied by Kate and an old friend, Sandy Moncrieff, he completed his last Munro, Meall Dearg on the Aonach Eagach ridge on the north flank of Glencoe. On attaining the summit they broached a bottle of champagne, then, he said, “Sandy made me first kiss the cairn and then my wife!”

Some may find it difficult to imagine today that by 1939 only eight had completed the Munros, whereas by 2008 over 4,000 have managed this feat.

He continued to climb for many years after this. Kate died in the mid-1930s, but after her death he married Winifred Dorothy Hutchison who accompanied him on many a climbing trip until he became too old for this.

He died at his home in Edinburgh on June 22 1858, a few days before his 88th birthday. Soon after, his widow presented his aneroid to the then SMC president.

It had survived his only mountain accident when, in a blizzard and thunderstorm on Ben Nevis, he had gone over the edge and was battered unconscious, bleeding profusely. Not seeking help, he walked six miles to Fort William where a doctor put twenty stitches into his scalp wounds.

He was not one to make a fuss, and recorded in his diary: “April 5th, 1905. Left Imperial Hotel Fort William at 9.05 for Ben Nevis via path. Struck by lightning about 1 on ridge of corrie overlooking Glen Nevis. Got home at 4.15. Dr MacArthur dressed my head for 2 hours. 20 stitches! Temperature about 1 degree above normal at 10pm.”