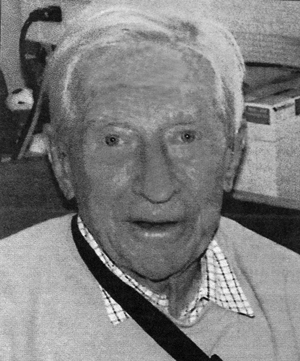 A HELENSBURGH man who won the Military Cross for bravery in the jungles of Burma in World War Two went on to have a successful career in estate management in the West of Scotland.

Ian Whitelaw Purvis was born in Lucknow, India, on October 26 1922 the son of Murray Purvis, a doctor in the Indian Medical Service, and his wife Hilda, daughter of the famous Helensburgh artist J.Whitelaw Hamilton, one of the Glasgow Boys.

Dr Purvis retired from his Indian post in 1928 and the family came back to Helensburgh, where he became a GP.

Ian (right), who had a brother Jim and a sister Helen, was brought up in the burgh and attended Larchfield School then Glenalmond and Queens College, Cambridge, where he read French and German before war interrupted his studies.

After training as an officer cadet, he volunteered for the Indian Army and was commissioned into the 6th Gurkha Rifles (Queen Elizabeth’s Own).

He joined the 4th Battalion, then fighting the Japanese, and celebrated his 21st birthday with a bottle of rum dropped from an aircraft.

By now a Lieutenant fighting alongside the Chindits, he was awarded the Military Cross for leading the rescue of a pinned down group of British soldiers after laying down smoke to conceal the operation from the Japanese.

He was badly wounded in action soon after arriving in Burma in October 1944, during the advance on Mandalay, and was sent back to India to recover.

After recuperating he had recovered sufficiently to participate in the victory parade after the Japanese surrender a few months later.

A quiet, kind and modest man, he rarely spoke of his experiences during the Second World War and never discussed his MC. He was promoted to captain in December 1950, and later became a Major.

After the war, he returned to Cambridge but switched course, graduating MA in agriculture.

He came back to Scotland and became involved in farm estate management, running the Forest Lodge, Jura House and Ardlussa estates on Jura and Glencreggan on the Kintyre peninsula.

After retiring in 1983 he rekindled his passion for hillwalking, having honed his skills as a young man in the Himalayas and Norway

He also developed a keen interest in archaeology, discovering a hoard of Neolithic stone axes and flint arrowheads while digging a drain on Rosehill Farm in Glencreggan, and in 1989 he was elected a Fellow of the Society of Antiquaries of Scotland.

He also painted in watercolours, and in 2006 he published ‘Memories’, a book of poetry based on his younger days in Argyllshire.

He said that there were so many poems in his little book of memories that there was something to suit every taste.

He added: “There is a poem about a night spent on top of Ben Lomond; one about my first flight — which was on a seaplane that belonged to a man living in Rhu — and there are also a few about other places I had visited on my travels.”

He served as chairman of the community council in Clachan, near Tarbert, where he lived with his wife Anne, and was a frequent writer of letters to the Editor of the Glasgow Herald.

He retained a huge admiration and respect for the Gurkhas, and was a tireless campaigner for the Gurkha Welfare Trust through sales of his book and many other activities.

He supported the actress Joanna Lumley’s successful fight to allow retired Gurkhas to settle in the UK.

He became progressively deaf in later years as a result of wartime gunfire, but despite the onset of arthritis and osteoporosis he led an active life until his final weeks, when he suffered two strokes.

He died peacefully at Campbeltown Hospital on August 17 2009 in his 87th year and was survived by his wife, a son, three daughters, and two granddaughters.

A memorial service was held at Clachan Church five days later, with the retiral collection in aid of the Ghurka Welfare Trust.