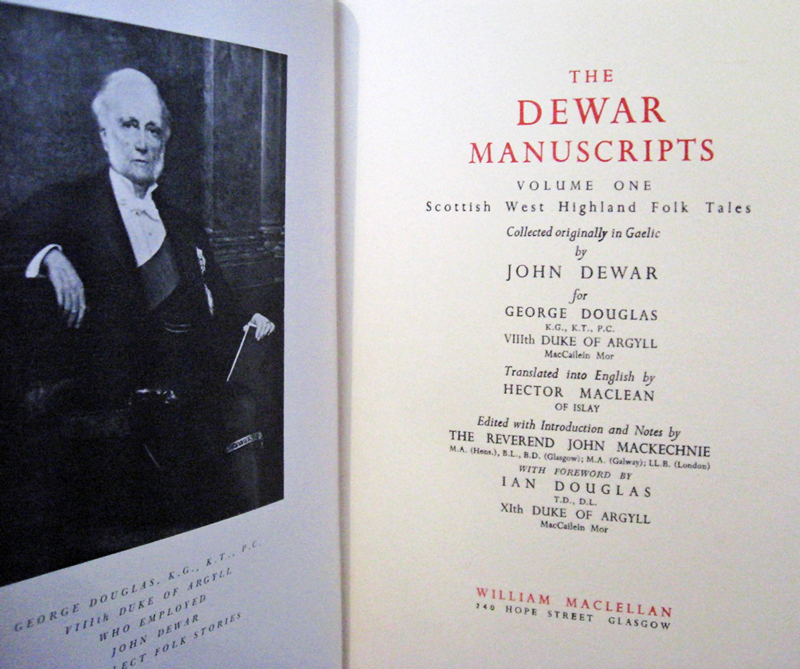 ONE of Scotland's most acclaimed collectors of Gaelic folk tales was born in Row (Rhu) parish and grew up on the Gortan estate on Loch Longside.

John Dewar was the third child of Arrochar couple Alexander Dewar, a farm manager, and Mary McFarlane, who were married in their home village in 1798.

He was to go on to leave a treasury of Gaelic stories, the largest collection of translated Gaelic tales ever gathered in Scotland.

The couple’s first-born child, Alexander, was born at Firkin on Loch Lomondside in 1799. However, parish records show that their next child, Peter, was born at Craganbreck in Row parish in 1801, as was John in 1802.

He was followed by seven other siblings up until 1820, all born at Craganbreck except the last two, who were born at Gortan, near Glen Douglas road end.

Craganbreck does not feature in other records, nor does it appear on any known maps. It is known that Craganbreck formed part of the Gortan estate thanks to Sue Furness of Tarbet, who learned of John Dewar's local origins through the investigations of D.J.Johnston Smith.

The puzzle over the location of Craganbreck was solved at a stroke. Dewar himself provided a vital clue, quoted in the introduction to the book ‘Popular Tales of the West Highlands’, Volume One, by J.F.Campbell (1860).

Dewar stated: “I remember, upwards of fifty years ago, when I was a boy, my father lived in the farest north house in the valley called Glen na Callanach.”

This name, which still appears on modern maps, though long obsolete in colloquial usage, effectively comprises the upper part of Glen Mallan, which joins with Glen Douglas at its northern extremity.

Ross's map of 1777 shows two buildings, marked Craggan, at that location. There is no other settlement shown on this or other old maps on the west side of the glen, so it would seem that Craggan and Craganbreck are the same place.

Further proof of a link between the Dewars and the Oswalds is provided by the naming of one of the Dewar children born at Craganbreck. Christened Mary Oswald Dewar, the child's middle name suggests an Oswald laird who was held in high esteem.

Little is known about John Dewar's upbringing and what formal education, if any, he may have received. His father, Alexander, appears to have been employed latterly by the Oswalds as a farm manager.

Whatever John's early education, in adult life he was at home with both English and Gaelic. While he could express himself fluently in both written and spoken English, a few basic grammatical shortcomings in his letters might suggest that little formal schooling came his way, and he was a self-taught man.

At some stage he developed the ability to follow written Gaelic, which may well have stemmed from the availability of Biblical texts in Gaelic. A version of the New Testament was published in 1766, but it was adapted from Irish Gaelic.

However, a Scots Gaelic equivalent became available from 1796, thanks to the work of Rev Dr John Stuart, the minister at Luss.

Young John was brought up in a world where the oral tradition was still very strong, and people were kept well entertained by a seemingly inexhaustible supply of tales of all kinds.

In this part of the country, Gaelic was still in common usage, and stories were often told in this language.

New tales were often circulated by people like chapmen, cobblers and tailors, whose work took them around the countryside. Many of the stories were set in the West Highlands, but much more exotic places could also feature.

Late in life, John recalled that as a boy, he had heard a story about two brothers and forty thieves, with “sesame” as the magic word — a story in fact from ‘Arabian Nights’. Some were quite uninhibited, and certainly not for the prudish.

John found many of the tales a source of endless fascination, particularly those which dealt with real people, places and events. He had a first-class sense of recall, and by the time he was eight he was well able to commit them to memory.

As an adult, John found employment as a woodsman, or sawyer. Much of his time was spent in making fencing posts.

He never seems to have had his own home, being generally a lodger. In the census of 1841, he is living with his father, by then a cottar and widower, at Firkin, with John described as a sawyer.

He appears to have looked on Rosneath as his home base, and he was on the payroll of the Duke of Argyll's Rosneath Estate. He also had a hand in running a local shop for a spell.

In 1871, he was a lodger at Relief Land in Inveraray. The following year, when he was a sick man, his last days were spent at the home of younger brother Donald at Lang's Land, West Bridgend, Dumbarton. 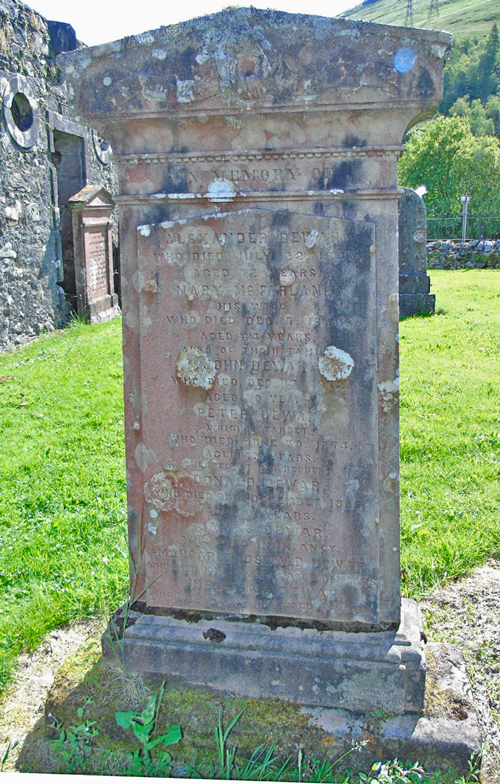 He died there on December 13 1872 from a heart condition, aged 70, and he was interred in the family plot at Arrochar churchyard (right).

Dewar led a simple but well-organised existence, and he kept meticulous records of personal expenditure. Very little is known about his private life, and no images of him have been found.

His life could easily have begun and ended in total obscurity had not some intriguing news come his way when in late middle age.

In 1859, while staying at Glendaruel, he got word that someone called J.F.Campbell of Islay was looking for folk tales and was willing to pay for suitable material.

Dewar supplied him with a number of stories, and Campbell was suitably impressed. A number appeared in his book ‘Popular Tales of the West Highlands’, Volume One, published in 1860. These had originally been supplied in Gaelic, but Campbell translated them into English.

Dewar's sample stories were sent initially to the Duke's Chamberlain at Inveraray, and an enclosed letter provides a fascinating insight into his abilities.

Dewar said that it had been a long time since he had read anything in Gaelic, and he had never before written anything in that language. Considering just how much he would subsequently write in Gaelic, his capacity to do so demonstrates just what abundant talent he possessed.

Fortunately for posterity, the chamberlain did pass on the material to J.F.Campbell as requested, paying Dewar £1 for his efforts.

John Francis Campbell was a remarkable man with enormous energy, ability and drive. He had many interests, and one was Gaelic folk tales. Educated at Eton and Edinburgh University, he was a cousin of the Duke of Argyll, and was on excellent terms with him.

Dewar and Campbell first met in 1860, at a meeting in Inveraray aimed at bringing together those identified as potential collectors of folk tales. Campbell was to play a crucial role in Dewar's future role, encouraging him to travel in the West Highlands and record suitable stories.

Dewar was still working as a woodsman, and in 1862 his health took a turn for the worse. Beset with palpitations of the heart, he found that he was in no fit state to keep up as before.

This led to him focussing exclusively on locating suitable people and recording their tales.

Campbell wrote that year: “He is a precise accurate old man with a wonderful memory and small imagination.” The following year he wrote: “I think this old fellow will get a very curious collection if he is allowed to go on.”

John Dewar certainly rewarded the faith placed in him. He had a lot of freedom about where to go, and how to spend his time. His commitment was impressive by any standards.

He would try to get a number of versions of a story from different storytellers — up to half a dozen. He would then integrate material from the different versions to make as complete and seamless a story as possible.

Next, he would painstakingly write out in Gaelic the final version, formed in beautiful copperplate script, referring to a dictionary when required.

He amassed an incredible amount of material in a decade. It is reckoned there are about a million and a quarter words in total, in ten large volumes.

Seven of these are kept with the Argyll archives at Inveraray, with the other three stored at the National Library in Edinburgh. It is calculated he collected stories from well over 300 people.

The Dewar collection is regarded by students of Highland folklore as unique, and it has been described as “the first oral history project ever conducted in Scotland”.

So what is it about his work that sets him apart? Leading Gaelic scholars like Ronnie Black have characterised his work as history from the bottom up.

They provide descriptions of historical events which can never be bettered by other sources. These include the Battle of Glen Fruin, the Massacre of Dunaverty, and the Appin Murder.

Dewar's stories may be folk tales, but they are far from being fairy stories. With Dewar's roots in the Arrochar area, a good number of his writings are set in what is now Helensburgh and Lomond.

There have been various plans to publish more of the manuscripts in English, and a team led by Ronnie Black is making a determined effort to work on the collection under the auspices of Friends of Argyll Papers.

A fair amount of the content holds out the promise of local interest. For instance, one of the stories already translated deals with the adventures of Robert the Bruce in the Loch Lomond area, at a difficult point in his career.

An intriguing possibility is that Dewar may have carried a camera. In 1862 he mentions that he had an injury when he was a sawyer and was looking for another form of employment.

He must have got round to buying one and mastering the tricky technology of exposing film in the field, because later he said he had left it and equipment in a house in Cowal.

Although he never mentioned photography again, it is just conceivable photographs taken by him in the form of black and white glass plates are still stored in someone’s attic.